A 71-year-old Filipina with a history of having undergone living-donor kidney transplant 5 years prior and a history of diverticulosis was admitted to the hospital because of a 5-day history of fever and debilitating weakness.

History. Two months before presentation, she had begun experiencing morning fevers, abdominal pain with eating, nausea, nonbloody diarrhea, and decreased oral intake. During that time, she had been hospitalized twice at an outside hospital for similar symptoms, where the results of upper endoscopy had shown duodenitis, the results of colonoscopy had shown ileitis with ulceration and colitis of the ileocecal valve, and the results of abdominal computed tomography (CT) scans had shown wall thickening and inflammation of the terminal ileum.

Her past medical history also included type 2 diabetes mellitus, cerebrovascular accident, hyperlipidemia, ovarian mass, and hypertension. She had moved from the Philippines to California 4 years prior. Her current medications included prednisone and tacrolimus.

Physical examination. On examination, the patient was thin, with slow responses, and was disoriented to time. She was febrile, tachycardic, and tachypneic. She had diffuse abdominal tenderness with guarding. Digital rectal examination revealed brown, guaiac-positive stool. Motor strength was 4/5 in all extremities. Physical examination findings were otherwise unremarkable.

Diagnostic tests. Chest radiograph findings (Figure 1) and results of workups for infectious and hematologic etiologies were unremarkable. Serologic test results were positive for the presence of anti-Saccharomyces cerevisiae antibodies (ASCA), consistent with Crohn disease (CD). Repeat abdominal and pelvic CT scans confirmed the findings of wall thickening and edema of the distal ileum noted on the previous studies (Figure 2), but with a new finding of bilateral ovarian cystic and solid masses concerning for malignancy. Subsequent CT scans of the chest showed disseminated peripheral ground-glass nodules and an indeterminate lung nodule (Figure 3). 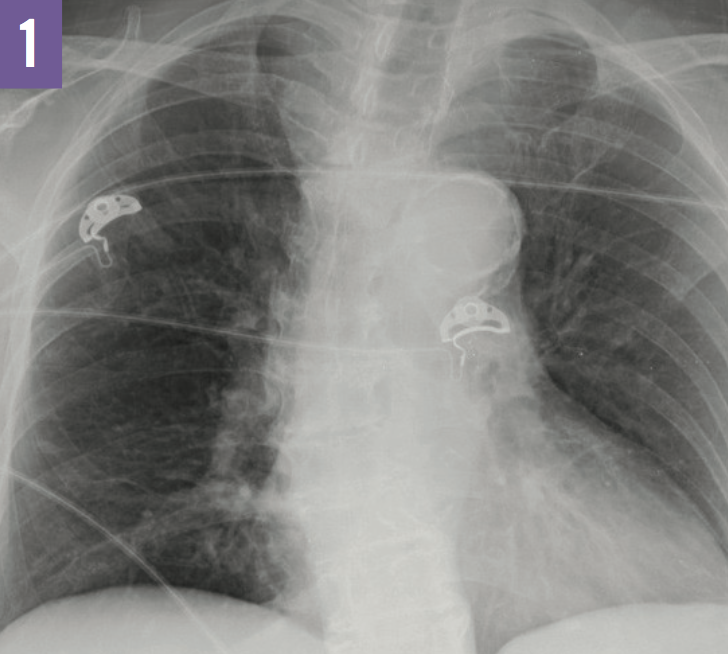 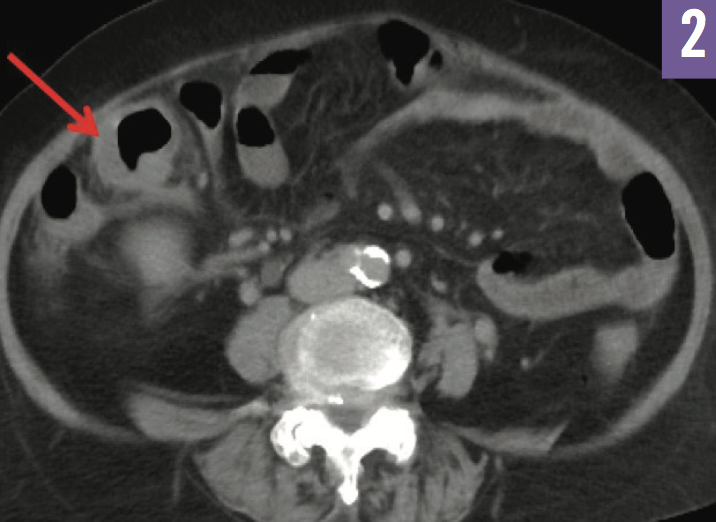 Figure 2: CT of the abdomen and pelvis showed wall thickening and edema of the distal ileum. 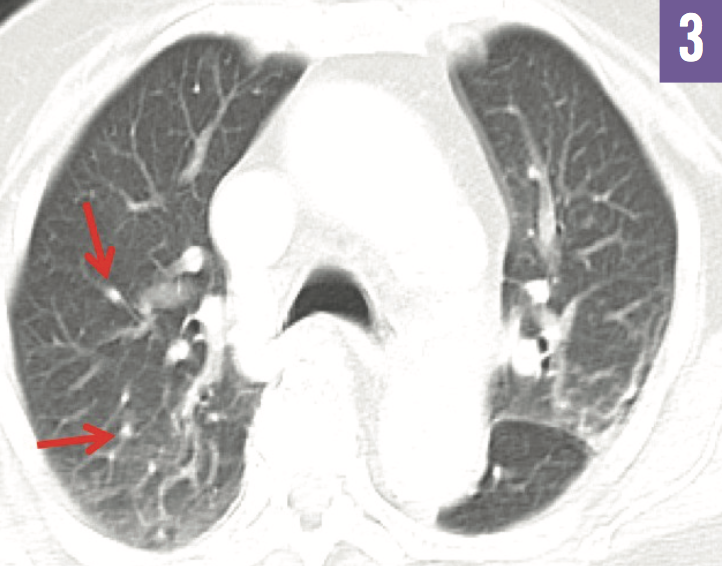 Results of QuantiFERON-TB Gold In-Tube tuberculosis (TB) antigen testing were indeterminate. Bronchoscopy was done, since the patient was unable to produce sputum; results of acid-fast bacillus testing of bronchial washings were +1 positive. Colonoscopy was performed, revealing erythema, edema, and friability at the ileocecal valve and at the terminal ileum (Figure 4); histopathology results of ileum biopsy showed multiple noncaseating granulomas (Figure 5) and Mycobacterium tuberculosis. 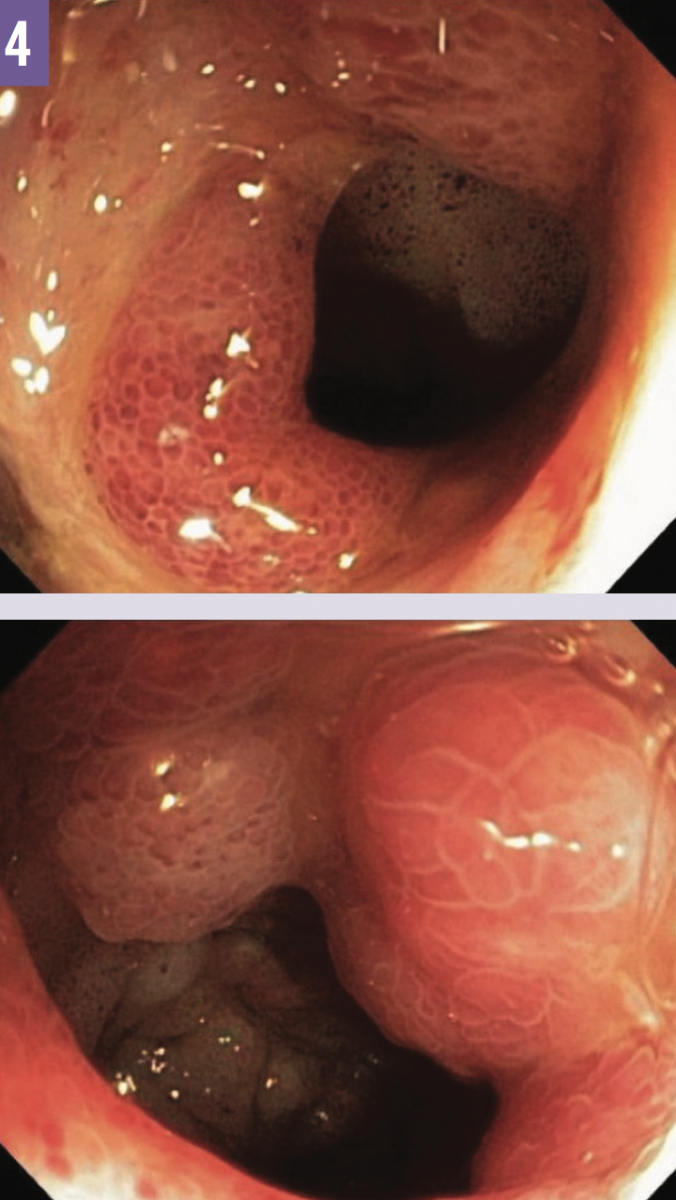 Figure 4: Colonoscopy revealed erythema, edema, and friability at the ileocecal valve (top) and at the terminal ileum (bottom). 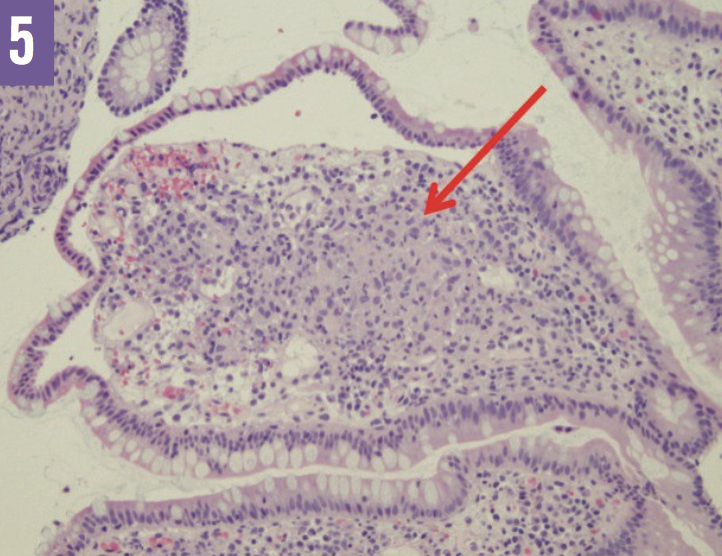 Outcome of the case. The patient was started on quadruple anti-TB therapy, after which she became afebrile. On day 12 of therapy, she remained afebrile with improved appetite, energy, and mobility. Results of follow-up tests of bronchial washings were negative for TB bacteria, and she was discharged home on a 9-month course of anti-TB therapy.

Discussion. Disseminated TB is caused by the propagation of M tuberculosis. It is fatal if left untreated. In 2013, 9 million new cases of TB were reported worldwide, of which 1.5 million resulted in death.1 The rarity of TB in the United States, with 582 reported cases in 2013,2 and the nonspecific presentation of disseminated TB make its diagnosis challenging.

The nonspecific symptoms of intestinal TB (ITB) can include fever (often cyclical), night sweats, abdominal pain, nausea, poor oral intake, palpable mass or masses, altered bowel habits, and bleeding.3,4 These symptoms may be mistaken for the conglomeration of symptoms consistent with CD, as occurred in this patient’s case. In cases where CD is the leading suspected diagnosis, positive results of an inflammatory bowel disease serology test for ASCA antibodies is not sufficient to exclude other diagnoses, particularly TB ileitis, since patients with ITB may also develop ASCA antibodies, further complicating the correct diagnosis. Although it is currently unclear, it is hypothesized that ASCA positivity in ITB may be due to increased intestinal permeability secondary to intestinal inflammation, or that there may be structural homology between an antigen of S cerevisiae (phosphopeptidomannan) and an antigen of M tuberculosis (lipoarabinomannan).5

Traditionally useful tools for diagnosing TB may not always provide definitive results. Chest radiographs have a sensitivity of 60% to 70% for disseminated TB, potentially causing 30% to 40% of cases to be missed if one relies solely on radiography.3 Additionally, QuantiFERON-TB test results are often indeterminate or may be falsely negative in immunocompromised individuals with disseminated TB,6 as in our patient’s case.

In immunocompetent patients, 20% of cases of ITB are due to extrapulmonary TB. ITB most commonly develops after ingesting infected sputum in cases of active pulmonary TB, but it may also be spread hematogenously or contiguously from adjacent organs. However, only 25% of patients with ITB have primary lung infection.7 The high density of lymphoid aggregates, neutral pH, absorptive transport mechanism, and physiologic stasis at the jejunoileum and ileocecal areas presumably allow tubercle bacillus to have prolonged contact with the mucosa, thereby accounting for the prevalence of ITB at those sites.4,8,9

Prompt arrival at the correct diagnosis and exclusion of CD is particularly important to treatment and management. Reports show that glucocorticoid therapy increases risk of developing TB,10 and therefore the incorrect diagnosis of CD and resulting treatment with glucocorticoids may exacerbate TB.11 Although uncommon, bowel perforation secondary of ITB, which can be life-threatening, has been reported.12-15

This case illustrates the nonspecific presentation of disseminated TB, the stark similarity of TB ileitis with CD, and the importance of including ITB in the initial differential diagnosis of chronic gastrointestinal tract symptoms, even in the absence of pulmonary symptoms.