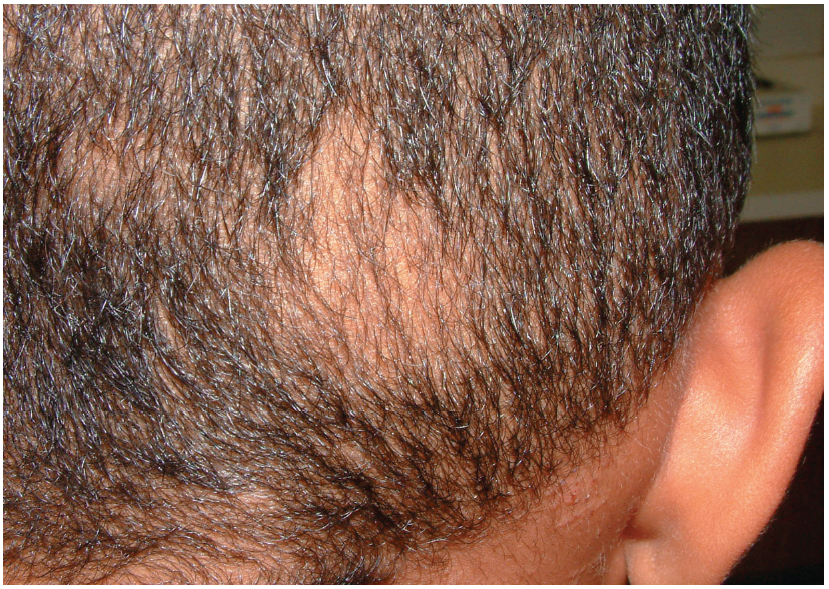 A 7-year-old boy is brought for evaluation of a noninflammatory, non-scarring area of alopecia of 3.5-cm diameter in the right occipital area, which had been present for 6 months. The patient has a history of attention-deficit/hyperactivity disorder. The father, and sole caretaker, reports that his son rarely stands or sits still for more than a minute, is often anxious, and frequently “pulls his hair when he has nothing to do.”

Under a magnifying glass, a round patch of hair loss with broken hairs of different lengths—a common presentation of trichotillomania—was visible.

Children with trichotillomania repeatedly twist and pull their hair until it breaks off. Generally, the hair pulling is done in private, and children deny this behavior when questioned.

The degree of hair loss varies from small, thin, undetectable round patches to complete baldness. The scalp is the most common site; however, eyelashes and eyebrows may be involved. Trichotillomania affects children 7 times more often than adults and occurs twice as often in girls as in boys. The cause of trichotillomania is unclear. Emotional stress, depression, anxiety, and family relationship problems may play a role. In some cases, hair pulling is a bad habit that has developed over time.

History and physical examination findings are usually sufficient for diagnosis. Irregular patches of hair and incomplete, nonscarring, noninflammatory alopecia are typical findings. Microscopic examination of a potassium hydroxide preparation may be needed to rule out tinea capitis. In questionable cases, biopsy may be helpful. Specimens may show pigmented follicular casts, increased density of noninflamed catagen hair, and traumatized hair follicles.

There is no single, effective treatment of trichotillomania in children. Several researchers recommend psychological therapies, including psychotherapy, hypnosis, behavioral therapy, stress reduction therapy, and cognitive therapy, as first-line. Use of selective serotonin reuptake inhibitors has shown some efficacy in certain patients.