ABSTRACT: For many years, corticosteroids, antihistamines, and epinephrine have been used to treat severe angioedema related to therapy with angiotensin-converting enzyme inhibitors (ACEIs). However, no clear evidence exists to support these therapies in patients who present with ACEI-induced angioedema. Moreover, no clear guidelines are practiced or applied in U.S. hospitals, in contrast with a number of European countries. Despite that the newer medications ecallantide and icatibant have demonstrated efficacy in treating hereditary angioedema, few recent randomized clinical trials have been published investigating the benefits of these agents in treating ACEI angioedema. This literature review summarizes the most recent studies and evidence in the approach to ACEI angioedema treatment for primary care providers.

Angioedema is a condition whose presentation ranges from mild symptoms to a life-threatening condition. A thorough history and comprehensive physical examination are important to determine the etiology of angioedema. The absence of urticarial lesions should alert the health care provider to the possible presence of some form of angioedema, whether hereditary, acquired, idiopathic, or induced by angiotensin-converting enzyme inhibitors (ACEIs) such as lisinopril, enalapril, and captopril.

Health care providers in emergency departments (EDs) and other settings still treat ACEI-induced angioedema with corticosteroids, histamine 1 and 2 (H1 and H2) blockers, and/or intramuscular or subcutaneous epinephrine, despite the absence of clear evidence supporting the efficacy of these agents. Nevertheless, no evidence exists to discourage their use. Although the kallikrein receptor blocker ecallantide and the bradykinin receptor blocker icatibant have been approved by the U.S. Food and Drug Administration (FDA) for hereditary angioedema, they have not yet been approved for ACEI-induced angioedema.

Angioedema is a self-limiting and localized swelling of the skin and mucosal membranes, usually lasting up to 72 hours. It can be acute or chronic, is usually transient, but often is recurrent. Angioedema tends to involve loose connective tissue such as the face, lips, mouth, throat, and larynx, with presenting symptoms ranging from cough, swelling, itching, and difficulty breathing to airway obstruction. It occasionally involves the gastric and bowel mucosa, leading to symptoms such as nausea and vomiting as a result of swelling in the gastrointestinal tract.1,2

In the United States, the reported overall lifetime incidence of angioedema is approximately 10% to 15%.1 ACEI-related angioedema represents 30% to 40% of all cases of angioedema seen in U.S. EDs.1

ACEIs are prevalent in the United States and comprise 30% of all U.S. hypertension prescriptions. Although it is uncommon (0.1% to 2.2%), severe angioedema can be life-threatening.3 While it can occur at any time during treatment with ACEIs, the majority of ACEI-related angioedema cases occur in the first week of treatment.

African American women have higher incidence of ACEI angioedema than do  people in other populations.3 Other predisposing factors include age older than 65 years, tobacco smoking, nonsteroidal anti-inflammatory drug use, seasonal allergies, obesity, a history of transplant, and history of ACEI-associated cough.

Neither the dose of ACEI nor the duration of treatment have been shown to be associated with a higher risk.2,3 The Omapatrilat Cardiovascular Treatment Assessment vs Enalapril (OCTAVE) trial4 and the Omapatrilat Versus Enalapril Randomized Trial of Utility in Reducing Events (OVERTURE) trial5 showed that the prevalence of ACEI angioedema is fairly underestimated.

Many use the terms urticaria and angioedema interchangeably. Urticaria (also known as hives) has approximately a 15% to 25% lifetime incidence in the United States.2 Urticaria is distinguished from angioedema by recurrent, pruritic, pinkish to rose-colored edematous lesions that range from few millimeters to few centimeters; it shares the angioedema characteristics of being transient and lasting for less than 48 hours. Adding to the possible diagnostic confusion, 40% of people who have urticaria also experience some degree of angioedema.2,6

Bradykinin-mediated angioedema comprises 3 major types of angioedema. Hereditary angioedema and acquired angioedema occur as a result of C1 inhibitor deficiency or dysfunction, which ultimately leads to increased bradykinin production, vasodilation and tissue permeability, and edema. Unlike these 2 types of bradykinin-mediated angioedema, ACEI angioedema occurs when ACEIs block the degradation of bradykinin by angiotensin-converting enzyme. This unregulated inhibition of degradation results in increased levels of bradykinin and other kinins, consequently leading to vasodilation and more tissue permeability. Bradykinin production can be inhibited by ecallantide, which acts on kallikrein, or by C1 esterase inhibitor (C1-INH), which acts to inhibit formation of kallikrein and high-molecular-weight kininogen. Activation of the bradykinin β2 receptor is inhibited by icatibant. In angioedema cases where C1-INH is deficient, treatment with pnfC1-INH concentrate (pasteurized, nanofiltered C1-INH) or recombinant human C1-INH replaces endogenous C1-INH to control bradykinin levels.1,7

Idiopathic angioedema is the most common type of angioedema and is the most recurrent form. It occurs in approximately 38% of patients. It can be bradykinin-mediated or histamine-mediated.6

Allergic or immunoglobulin E-mediated angioedema is type of histamine-mediated angioedema in which an allergen activates a hypersensitivity-type reaction, which leads to the activation of mast cells to release histamine and other vasoactive mediators. The syndrome usually is triggered by food or medications and starts in minutes to approximately 1 hour after trigger exposure.6

Hereditary angioedema is a bradykinin-mediated angioedema. It is an autosomal dominant disorder caused by a deficiency in the C1-INH, which regulates the activity of the complement component C1. Deficiency of C1 esterase results in unregulated activity of the vasoactive mediators bradykinin, kallikrein, and plasmin.

Hereditary angioedema is subclassified into 3 types. Type 1 represents 85% of hereditary angioedema cases and is related to a defective gene that causes decreased expression of C1-INH. Type 2 features a normal plasma level of C1-INH, but the protein is dysfunctional. Type 3 is caused by a mutation in coagulation factor XII that leads to increased kinin production; it also is called estrogen-dependent angioedema, because symptoms are exacerbated by the use of estrogen-containing medications.6

Acquired angioedema is caused by protein C1-INH deficiency due to autoimmune disease and C1 antibody, which consumes the C1 esterase antibody, or it is associated with lymphoproliferative and malignant cells that consume the C1 esterase protein.6 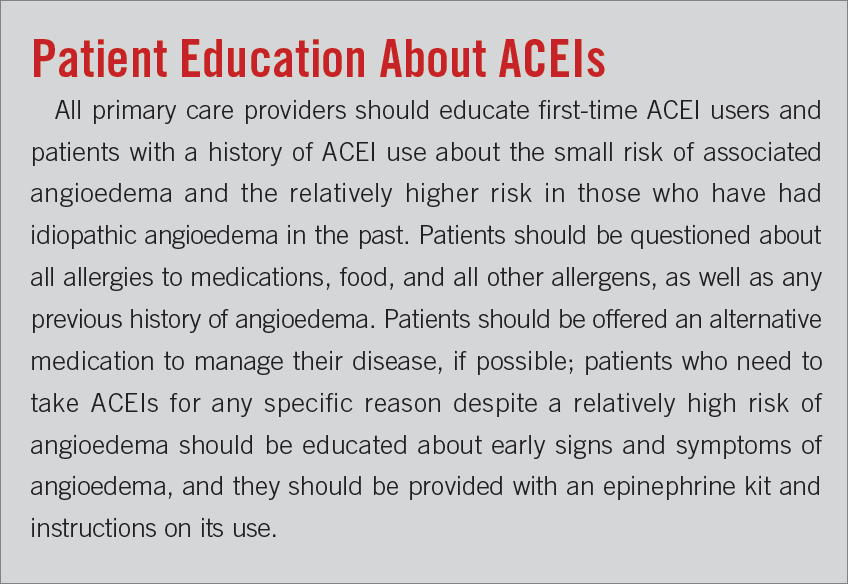 Once angioedema is recognized clinically, health care providers must determine the type of angioedema and treat it accordingly.

The resolution of symptoms after stopping ACEI therapy is confirmatory in the absence of a specific diagnostic laboratory test.2,3

Acute airway evaluation and management are the first important step in the approach to a patient with ACEI angioedema in the ED setting. Nasotracheal intubation usually is preferred to secure the airway, since nonpitting edema can make oral intubation difficult or even impossible.

The second most important step is to discontinue the offending agent. Angioedema due to ACEIs usually is self-limiting and resolves in 12 to 48 hours after discontinuation. Some cases persist and become complicated with sever oropharyngeal and tongue swelling, which can compromise breathing.1,3,8,9

Corticosteroids, antihistamines, and epinephrine still are used for the initial treatment of ACEI angioedema; however, no specific guidelines have been published in the United States.

While the kallikrein receptor blocker ecallantide and the bradykinin receptor antagonist icatibant have been approved by the FDA for management of hereditary angioedema, not enough data are available to support their use in ACEI-induced angioedema—only one randomized, controlled trial has been published for each agent.1,3,6,10-12

A recent U.S. randomized clinical trial of icatibant6 showed that in participants with ACEI-induced angioedema, the medication led to a significantly faster resolution of edema compared with traditional treatment with corticosteroids and antihistamines. Another recent clinical trial11 in patients with ACEI-induced angioedema showed that the addition of ecallantide to standard therapy did not improve angioedema compared with placebo plus standard therapy.

Complement C1 inhibitor concentrates also are being studied,10,13 but insufficient data are available to support their use as a treatment for ACEI angioedema. A successful reversal of life-threating resistant angioedema with fresh-frozen plasma has been reported.2,14

Angioedema is a condition whose presentation ranges from mild symptoms to a life-threatening condition. A thorough history and comprehensive physical examination are very important to determine the etiology of the angioedema. The absence of urticarial lesions should alert the clinician to the possible presence some form of angioedema, including hereditary, acquired, idiopathic, or ACEI-induced types.

Not enough evidence is available to support the use of corticosteroids, antihistamines, and epinephrine in persons with severe angioedema symptoms. To date, no published randomized controlled trials or prospective observational studies have been conducted to evaluate corticosteroids, antihistamines, and epinephrine in treating ACEI angioedema, even though these medications have been used to treat the various types of angioedema, including ACEI-induced angioedema, with no clear guidelines.1,3,8

Patients with a medication history of ACEI use or a past medical history of episodes of angioedema due to ACEIs who present to an ED with ACEI-induced angioedema are unlikely to benefit from corticosteroids, antihistamines, or epinephrine. Nevertheless, during an emergency visit, the etiology of angioedema often can be unclear, and a patient might not remember whether he or she has started a new medication or has had exposure to a new food, or whether this is a first presentation of hereditary angioedema—situations that justify their use in most cases of angioedema. Each one of these scenarios has different treatment approach.7

While a number of studies have been conducted, and the FDA has approved treatment targeted at different types of hereditary angioedema, not enough robust data are available concerning the treatment of ACEI-induced angioedema. No guidelines have been established in the United States regarding ACEI-induced angioedema treatment, and the evidence of efficacy of corticosteroids, antihistamines, and epinephrine still is controversial.1,8,9,13,15

Dhafer Salem, MD, MPH, is in the Department of Family Medicine and Public Health Sciences at Wayne State University in Detroit, Michigan.