Mr. K is a 58-year-old Caucasian male with a long-standing history of diabetes mellitus, hypertension, and chronic kidney disease who has been on continuous ambulatory peritoneal dialysis for 3 years. Initially, treatment achieved good adequacy of dialysis, and the patient reported a feeling of well-being. During the last 6 months, however, his dissatisfaction with dialysis increased, which he attributed to the increased time needed to perform exchanges and his weight gain. Mr. K underwent right lower-extremity, below-knee amputation secondary to gangrenous foot as a complication of severe peripheral vascular disease. The postoperative course was complicated by symptomatic gallstone disease and acute cholangitis requiring laparoscopic cholecystectomy. After the abdominal surgery, the patient underwent temporary hemodialysis.

On the twenty-first hospital day, Mr. K developed an acute respiratory distress, and he was then transferred to the Intensive Care Unit (ICU). He was diagnosed with sepsis due to peritonitis and right pleural empyema. During his ICU stay, the patient reported feeling “fed up,” but he continued to request aggressive care and support as long as there was a chance for survival. He was optimistic about the prospect of being a kidney transplant recipient, and he was willing to continue with hemodialysis.

Throughout the course of his illness, Mr. K had episodes of delirium with waxing and waning lethargy, and periods of agitation requiring administration of small doses of haloperidol. When the patient experienced delirium, the family—with the patient’s wife acting as durable power of attorney—requested that all aggressive care be discontinued. Contrary to the treating physician’s impression, his family stated that this was the patient’s wish. Mr. K’s advance directives were not available.

The patient’s medical condition gradually stabilized. Unfortunately, his functional status significantly deteriorated. He now required moderate assistance with bed mobility, and he had to be re-admitted to the acute Rehabilitation Unit. The goals of rehabilitation were to return to independence regarding basic activities of daily living and to successfully ambulate household distances with an assistive device. Mr. K’s progress in therapy was slow, so the treatment team raised the possibility of therapy continuation at a nursing home. The patient’s family was included in this discussion.

On the sixth week in the clinical course, Mr. K refused hemodialysis, saying that he wanted to end his life. Psychology and psychiatry consults were requested for depression and its possible impact on the patient’s decision to decline dialysis.

Key Points from the Psychology Consultation
Mr. K, a retired salesman, resides with his wife of 37 years in a mobile home. The couple has four adult children. Prior to his decline over the last 3 years, he had been an avid water skier. He had also been the primary caregiver for his wife, who has multiple sclerosis and has significant deficits in her functional status. Mrs. K is wheelchair-bound.

The patient has struggled with depression over the past few years. Prior to worsening of his medical status, there was no history of any kind of mental illness. He denied any use of alcohol or illicit drugs. He said that he is “religious” and so chose not to use alcohol. He complained of being in pain, but he was most concerned with the “limitations” of his life. The patient said, “I love my wife and kids,” and he expressed grief that Mrs. K “has to struggle with my health problems in addition to her own.” He described his wife and children as supportive of any decision he makes—whether to stay on dialysis or to end his life by stopping it. He stated that a year ago he tried to stop dialysis, but he changed his mind.

Key Points from the Psychiatry Consultation
The patient was well known to the consulting psychiatrist. He had been previously diagnosed with severe depression and had been maintained on sertraline 100 mg daily for 1 year. When talking with the psychiatrist, the patient expressed a great deal of conflict about whether to continue with dialysis. “I feel like I’m a burden on my family...it is just not convenient anymore to look after me.” During the same interview, he stated that he would like to be alive and to see his first grandchild, who was to be born in a few months. According to Mr. K, his brother and mother expressed their desire that he continue with treatment. While indicating that the decision to discontinue treatment is solely his own, he commented that his wife is accepting of his recent leanings toward discontinuing treatment.

Dialysis withdrawal is common. Among patients receiving dialysis, it is the third leading cause of death, after cardiovascular disease and infectious complications.1 The decision to withdraw life-sustaining treatment can be challenging for patients, families, and physicians. Ethically and legally, any competent adult patient has the right to refuse or request to withdraw medical treatment. When “competency” is in doubt due to emotional problems such as depression, further assessment is needed. When depression is diagnosed, there must be a determination whether depression is affecting or limiting the patient’s decision-making capacity. If so, the treating physician may ethically object to the patient’s request to withhold or withdraw life-sustaining treatment. 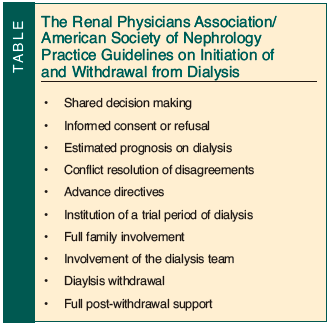 Withdrawal from dialysis in seriously ill patients is a complex ethical and psychosocial issue. The expected outcome from the discontinuation of maintenance dialysis is death, usually within 7-14 days. Any competent adult patient has a constitutional right to refuse treatment, even when the physician believes that the treatment would be beneficial. The patient, physician, or the patient’s family may suggest withdrawal from dialysis. The American Society of Nephrology (ASN) and Renal Physicians Association (RPA) have published practice guidelines on appropriate initiation of and withdrawal from dialysis2 (Table).

Request for the discontinuation of life-sustaining treatment requires a careful evaluation process. The physician must respect the patient’s autonomy, while carefully analyzing issues related to competence. The potential for conflict between the physician and the patient may arise when the patient has a psychiatric condition, such as depression, and the capacity to make decisions about care is uncertain.

Why is the patient requesting to discontinue life-sustaining treatment? What is the reason? Is he or she in pain? Is he or she depressed? Is there any other psychological, social, or spiritual distress?

Many factors in Mr. K’s history may have contributed to his request to discontinue dialysis. He was suffering physically and emotionally. His phantom pain was not adequately controlled. By his estimate, his functional status was poor. He was dependent on others for his basic needs. Nursing home placement was the only apparent relief from his dependence on family, but this was a discouraging option for a relatively young man. Lastly, he had a history of depression.

Is he or she “competent” to make a decision regarding treatment termination, and how do we assess his or her decision-making capacity?

There is no single clinically accepted standard for the assessment of decision-making capacity. Most patients give evidence of their competency during the medical examination by the questions they ask. However, some tools may help guide clinicians through the assessment of decision-making capacity. The MacArthur Competence Assessment Tool for Treatment (MacCAT-T)3 is a semi-structured clinical interview with a rating scale. In determining adequate decision-making capacity, four cardinal elements are taken under consideration: (a) the patient’s ability to understand the proposed treatment and alternative choices; (b) the appreciation or the ability to process information, such as weighing the risks and benefits of treatment options; (c) reasoning or the ability to articulate the relationship between personal values and the discussed choices; and (d) the ability to communicate a choice. Practitioners who prefer a briefer scale might like the algorithm devised by Miller and Marin,4 a variant of the MacCAT-T.5

In making a capacity decision regarding the case patient, the treatment team applied these models by considering the following:

• Is he able to understand his condition and proposed treatment plan and alternative interventions?
• Does he have the capacity to weigh the benefits versus the risks of withdrawing dialysis?
• Is he able to communicate his voluntary decision?
• Is he constant in expressing his decision?

The treatment team had to be absolutely convinced that his decision-making capacity was intact, because the decision being explored was of momentous importance.

Does depression affect his or her decision-making capacity?

In clinical evaluation of medically ill patients with depression who refuse life-saving treatment, the evaluation of the effect of depression on a patient’s capacity to refuse treatment may be challenging. There is general agreement that before a clinician agrees to a patient’s request to withdraw life-sustaining treatment, the clinician should evaluate and treat depression. However, in major depression of mild-to-moderate severity, a patient’s preferences regarding life-sustaining treatment are not significantly influenced by depression and unlikely to change with depression treatment. Severe depression may have a significant effect on decisions in some circumstances. Pain, as well as any social or spiritual distress, should be addressed.7 Other factors that may have significant impact on end-of-life decision making are: cancerous versus noncancerous diagnosis, estimated prognosis, treatment risks versus benefits, comorbid illnesses, symptom burden to the patient and treatment burden to the caregiver(s), treatment financial cost, personal and family culture, personality and psychosocial variables, hope, denial, and anticipatory grief.8

Depression is often diagnosed and treated in patients with serious medical illness. After optimizing medical and psychiatric treatment and determining adequate decision-making capacity, it is appropriate to honor the patient’s wishes and desire to die.9

Mr. K’s physician and rehabilitation team were not confident with his decision. They thought that the patient was too concerned with the impact of his illness on his family and even wondered if the family was putting subtle pressure on the patient to stop dialysis. At the least, the patient’s family did not offer strong objections to discontinuation of dialysis, a point that angered the treatment team. To reassure all involved that Mr. K’s decision-making capacity was unhampered by social duress, the case was presented to the bioethics committee. The bioethics committee reviewed the patient’s medical record, including the psychology and psychiatric evaluations. To mitigate the possible effects of depression on decision making, his psychiatrist recommended that the patient be placed on methylphenidate 2.5 mg once daily in the morning with dosage titration by 2.5 mg every 3 days as tolerated to a maximum of 20 mg per day. In addition, he suggested that the antidepressant sertraline be increased to 150 mg daily. These recommendations were implemented. After 4 weeks of treatment, Mr. K remained constant in his decision to stop dialysis.

The bioethics committee concluded that the patient was not suicidal and that depression was not playing a major role in his decision-making process, as his decision was consistent with his beliefs and past behaviors. His decision-making capacity was found to be intact.

It was anticipated that clinicians and the treatment team might not agree with Mr. K, and that they might feel dislike for his family. They may even think that the patient should be made to adjust his thinking and change his family role. These and other possible reactions were discussed directly with the treatment team to resolve any disagreement.

Mr. K was admitted to residential hospice. He died peacefully on the tenth day after dialysis discontinuation.