A previously healthy 12-year-old girl presented to the emergency department (ED) with a 3-day history of worsening perineal, abdominal, and low back pain that was associated with urinary urgency, frequency, and difficulty with voiding. She also had had intermittent fever as high as 38.9°C.

There was no history of vomiting, diarrhea, or constipation. Her last menstrual period had lasted for 3 months and had ended 3 days before presentation. She had been using 1 or 2 light pads each day for these 3 months. Findings on review of all other systems were unremarkable, and there was no history of travel or trauma. There was no significant past medical or family history.

Her primary care physician had seen her the day before presentation and had prescribed cephalexin and phenazopyridine for a possible urinary tract infection (UTI) despite not having performed urinalysis or culture, since the girl had been unable to void in the office. She then came to the ED because she was unable to sit as a result of pain in the perineal and vaginal areas.

In the ED, she was afebrile and her vital signs were stable, but she seemed to be in severe pain and walked awkwardly. Findings of a systemic examination were normal. Her abdomen was soft and nontender, with no organomegaly or mass. She had no costovertebral angle tenderness.

Laboratory tests revealed a white blood cell (WBC) count of 6,800/µL, a hemoglobin level of 11.3 g/dL, and a platelet count of 298 × 103/µL. Mean corpuscular volume and red blood cell (RBC) distribution width were normal. Basic metabolic panel results were normal. Urinalysis was not interpretable because of interference from her phenazopyridine regimen. Urine microscopy showed 0 to 5 WBCs per high-power field and 0 to 2 RBCs per high-power field. A urine sample was sent for culture testing.

The girl received a bolus of normal saline and ketorolac for pain. Admission was requested for administration of intravenous antibiotics and pain control for a suspected UTI.

Further questioning of the girl revealed that although her menarche had been 9 months prior, her menstrual periods had been irregular. She described them as “smearing of the pad or mild soakage.” Her daily bleeding for the past 3 months fit the same description and had ceased 3 days before the onset of her current symptoms.

Perineal examination revealed a large, pink bulge between the labia, suggestive of a hematocolpos. Results of abdominal ultrasonography were normal except for mild splenomegaly. Pelvic ultrasonography (Figures 1-3) revealed a complex cystic mass measuring 13.1 × 7.8 × 7.2 cm, caudal to a cranial and anteriorly displaced uterus, containing echogenic material in the dependent portion, and confirming the diagnosis of hematocolpos. She received a diagnosis of microperforate hymen with a large hematocolpos and was admitted for gynecologic consultation and further management. 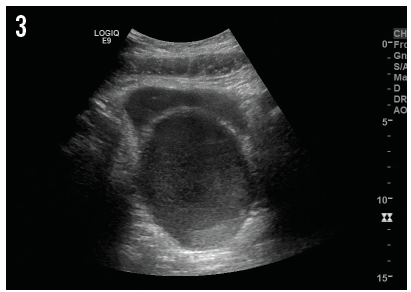 She was started on intravenous ceftriaxone for fever and possible infection of the hematocolpos. Magnetic resonance imaging (MRI) of the pelvis with and without contrast (Figures 4 and 5) confirmed a hematometrocolpos associated with an incomplete septation or fold in the superior aspect of the vagina. It was filled with a complex fluid representing hemorrhages of varying age. Also noted was a partial septate uterus, with the septum extending 1.5 cm from the uterine fundus.

She was taken to the operating room with a preoperative diagnosis of transverse vaginal septum causing hematocolpos. Approximately 360 mL of infected retained blood products were drained. The septum was excised, and redundant vaginal mucosa was sutured. Pathology of the excised vaginal septum revealed fibrovascular and muscular tissue with vascular congestion, chronic inflammation, inflamed granular tissue, and fibrinopurulent exudates. Urine culture results were negative for pathogens. She made a full and rapid recovery and after 3 days was discharged home on a 1-week regimen of oral clindamycin and topical estrogen cream for the vagina.

An MRI scan at follow-up 2 months later revealed a partially septate, anteverted, and mildly rightward flexed uterus, and a single normal cervix. The girl had been doing well. 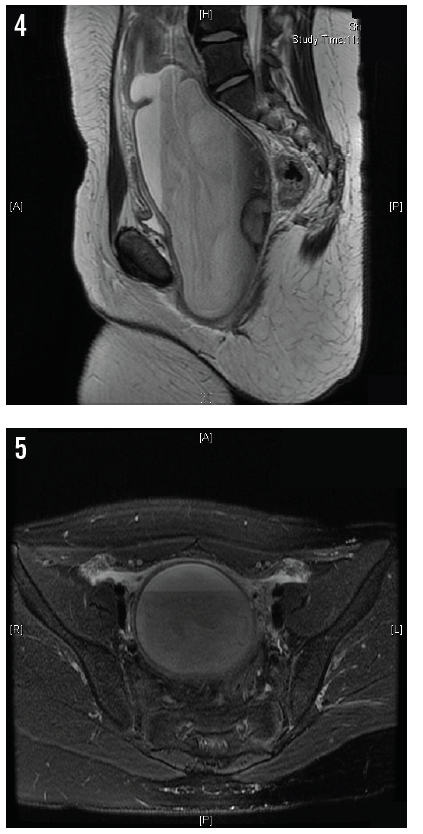 Girls with UTI typically present with fever, abdominal pain, and low back pain, along with urinary urgency, frequency, dysuria, and difficulty with voiding. In our patient’s case, the key complaint that initially may have been overlooked was vaginal pain, which typically is not associated with UTIs. Our patient complained of severe perineal and vaginal pain related to pressure from the mass, to the extent that she was having trouble sitting and had a waddling gait.

The most common cause of hematocolpos is an imperforate hymen, which is associated with primary amenorrhea. Primary amenorrhea also is present when hematocolpos is caused by a complete transverse vaginal septum, vaginal agenesis, or vaginal atresia. Our patient had a history of irregular periods since her menarche 9 months before presentation, as well as a history of daily bleeding for 3 months. This presentation initially did not lead to the consideration of a diagnosis of hematocolpos.

A hematocolpos can become infected due to an ascending infection via the fenestration, producing a pyohematocolpos, as happened in our patient. A large hematocolpos may cause persistent abdominal and low back pain due to pressure or by causing endometriosis, hydrosalpinx, hydroureter, or hydronephrosis. Uterus didelphys, a rare condition with double cervices and vaginae, also can be associated with an imperforate obstructed hemivagina and hematocolpos along with regular menses from the unobstructed side. When associated with renal agenesis on the same side, this condition is called obstructed hemivagina with ipsilateral renal agenesis (OHVIRA) syndrome.

Hematocolpos should be on the list of differential diagnoses in adolescent girls with primary amenorrhea who present with any of the following: cyclic recurrent abdominal pain; persistent lower abdominal and back pain; perineal pain and pressure; symptoms suggestive of a UTI; recurrent UTI; symptoms of urinary obstruction or acute urinary retention; and chronic constipation. However, a lack of a history of primary amenorrhea should not exclude a diagnosis of hematocolpos if any of these symptoms are present.

Shraddha Mittal, MD, is the assistant director of the Department of Pediatrics at the Children’s Hospital of Philadelphia at Virtua Voorhees in Voorhees, New Jersey.

Rashida Pittalwala, MD, is a hospitalist in the Department of Pediatrics at the Children’s Hospital of Philadelphia at Virtua Voorhees in Voorhees, New Jersey.