A 16-year-old healthy boy experienced a 10-minute episode of left-sided weakness and difficulty speaking after returning home from track practice. While trying to open the bathroom door, he felt the left side of his body “go weak,” and he fell. His parents noted limpness of his left arm, drooping of his left face, drooling, and incoherent speech. His past medical history was positive for 2 concussions the previous year. His social history was negative for drug use. He recalled an episode with similar symptoms about a year ago.

The family drove 30 minutes to an urgent care facility, by which time the boy’s symptoms had resolved. Physical examination findings were unremarkable, and results of computerized tomography of the head were normal. After receiving a bolus of normal saline and 81 mg of aspirin, he was transferred to a pediatric hospital.

Results of screening tests for a hypercoaguable state (factor V Leiden, prothrombin 20210A mutation, proteins C and S) were normal. A Doppler study of lower extremities and magnetic resonance venography of the pelvis were negative for thrombi. Magnetic resonance imaging (MRI) of the brain showed scattered foci of restricted diffusion in the right frontal and parietal lobes, suggesting embolic infarctions (Figure A). Transcranial Doppler ultrasonography suggested a cardiac or pulmonary shunt. An echocardiogram showed a positive bubble test upon injection of agitated saline, indicating right-to-left shunting across the atrial septum (Figure B). A paradoxic embolus through this patent foramen ovale (PFO) likely was the cause of his transient ischemic attack (TIA). 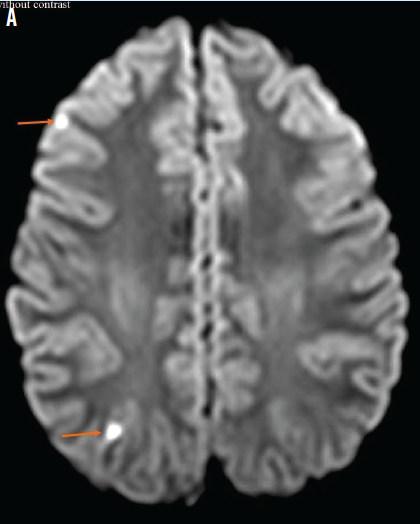 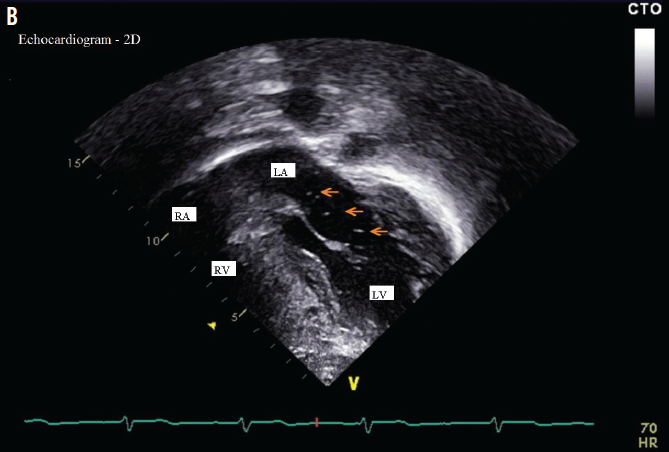 The pediatrics, cardiology, and neurology teams made a consensus decision to close the PFO using an atrial septal occluder. After 6 days, he was discharged on daily aspirin, 81 mg, and enoxaparin, 60 mg, for 6 months.

A TIA is an episode of transient neurologic dysfunction due to ischemia in a focal part of cerebral tissue not associated with cerebral infarction.1 TIAs in children are rare, and the incidence is unknown. Because of this rarity, symptoms in children may go undetected by family and clinicians.

In a case series of 531 children admitted for TIA, 41% had no known risk factors; the remainder had moyamoya disease, sickle cell disease, migraine, and congenital heart disease.2 In the same study, 67% of TIAs occurred in patients between the ages of 11 and 18 years, and 4% of the 531 children progressed to acute stroke during the same hospitalization. In another study,3 a third of children admitted with a stroke had a prior history of a TIA.3 However, it is unknown how often TIAs progress to stroke in children. In adults, 10% to 15% with TIA symptoms have a stroke within 3 months, and half of these occur in the first 48 hours.1 As in our patient’s case, it is common to see changes consistent with cerebral infarction in neuroimaging in children who present with TIA symptoms.4 Our patient had MRI findings consistent with multiple embolic infarctions.

The recognition of TIA symptoms and risk factors by health care providers is crucial in preventing pediatric stroke. In 2008, the American Heart Association (AHA) Stroke Council published a statement on the management of pediatric strokes.4 However, no guidelines exist for the management of pediatric TIAs. Because TIAs can be precursors to stroke, symptoms should be evaluated promptly. Further research is needed to determine the prevalence of TIA in children and whether evaluation in a hospital setting is effective in preventing the evolution of stroke in children.