A 10-year-old boy presented with a cough, increased work of breathing, and a rash on his cheeks, back, and shoulders. He has a history of developmental delay and seizure disorder and takes levetiracetam; a month ago, he also had been placed on zonisamide because of breakthrough seizures. Of note, a day before, he had presented to a different clinic with a 2-day history of cough and had been given amoxicillin for streptococcal pharyngitis.

The boy was admitted to pediatric critical care, where he quickly deteriorated and went into respiratory failure, subsequently developed pneumothorax and extensive subcutaneous emphysema, and went into acute respiratory distress syndrome (ARDS). His rash progressed to large areas of desquamation involving the face, the penis, both sides of the back, both ears, and areas on the chest. The skin lesions were extensive partial-thickness burns covering at least 40% of the back and 18% of the face, along with the anterior chest and upper extremities (Figure). His palms and soles were spared. He was transferred to a nearby children’s hospital for advanced burn care. 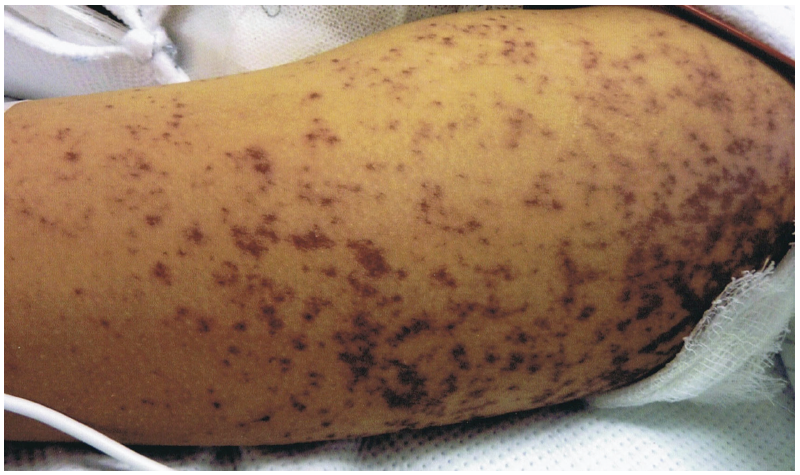 Figure – A 10-year-old boy’s rash progressed rapidly to desquamation of the face and other parts of the body, with extensive lesions also covering the chest and upper extremities.

His skin lesions eventually healed, but his severe ARDS required that he be placed on high-frequency oscillatory ventilation. Because his condition had not improved, he received 5 days of plasmapheresis.

He also received high-dose corticosteroids, 30 mg/kg for 5 days with slow tapering thereafter, out of concern about the possibility of an autoimmune disorder having precipitating these events. His antinuclear antibody titer was high at 1:640. He went into multisystem organ failure, sparing the kidneys. He also required multiple chest tube placements for persistent air leaks.

He eventually recovered but has required a gastrostomy tube for feeding. He was found to have a paralyzed right diaphragm, for which he underwent tracheostomy tube placement for home ventilator use. He required left-sided pleurodesis to resolve persistent pneumothorax. As a result of his need for prolonged use of a ventilator, corticosteroids, and paralytics, he developed severe myopathy.

This patient had toxic epidermal necrolysis (TEN), a clinical syndrome characterized by cutaneous tenderness, generalized erythema, and exfoliation of the epidermis that resembles scalding.1 Large, blistered erythematous patches and plaques develop and evolve rapidly to extensive areas of skin necrosis, with loss of sheets of epidermis.

TEN is rarely encountered and is less frequent in children than in adults. Adverse effects of medications are the most common cause of TEN; however, a specific cause can be identified in only about 50% of cases. Many patients who experience TEN are taking more than one drug simultaneously, as our patient was, which often makes it difficult or impossible to identify the sole offending agent. Antibiotics, anticonvulsants, sulfonamides, and nonsteroidal anti-inflammatory drugs are among the most commonly incriminated classes of drugs. Immune reactions of several types play a key role in the pathogenesis of TEN.2

The cutaneous manifestations of TEN occur acutely and progress rapidly with a dramatic intensity. Profound systemic effects, including water and electrolyte imbalances and renal, hepatic, and cardiopulmonary alterations, are seen along with tracheobronchitis, esophagitis, and gastrointestinal bleeding from epithelial disruption.2

Because of the condition’s similarity to second-degree burns, severe cases of TEN may be best treated in an intensive care unit, preferably a burn unit.3 An experienced burn team together with the critical care team can direct proper care of the patient. Early referral to a burn center appears to have contributed significantly to the increasing survival rates of patients with TEN.

Discontinuation of the responsible drug is the first mandatory measure. Plasmapheresis also is used as first-line therapy.4 Management of the extensive skin wounds and nutritional and critical care support are needed. The role of systemic corticosteroids is controversial. The mortality rate of patients with TEN ranges from 20% to 50%.2