A 53-year-old man presented with a 20-year history of burning, itching, and redness on his back and upper extremities. He reported that the lesions, which occurred seasonally, were worsening in size, color, and elevation. The man had no local access to a dermatologist and had been referred for evaluation to our clinic via store-and-forward teledermatology (SAFT).

History and examination. The patient had a past medical history of Graves disease but had no personal history of skin cancer. Past treatments had included topical selenium sulfide shampoo, prescribed by his primary care physician for suspected tinea versicolor, which had led to no improvement. Examination of the images sent via SAFT showed erythematous, circular macules with fine scale that were coalescing into larger patches, located mostly on the patient’s upper and central back and extending laterally (Figures 1-4). Based on the clinical images, the patient received a diagnosis of tinea versicolor. 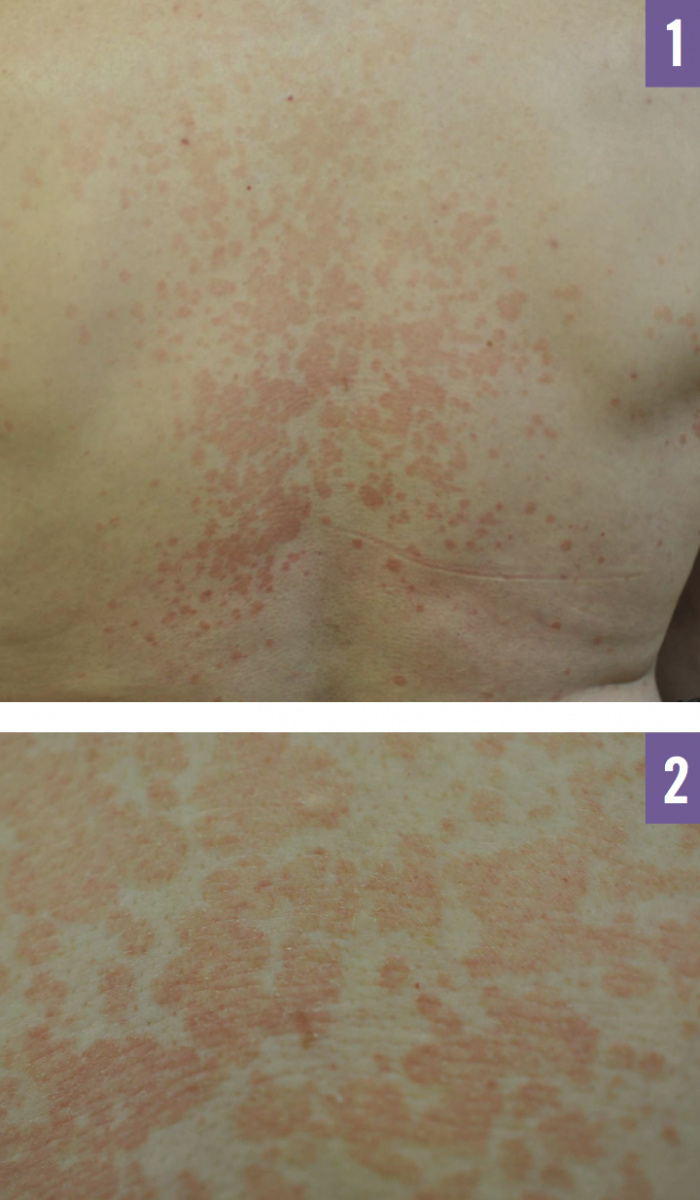 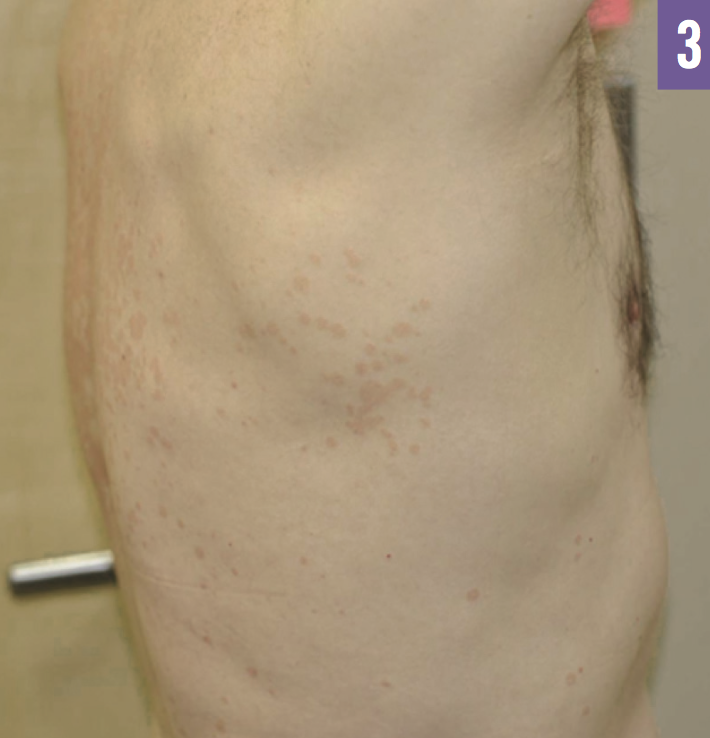 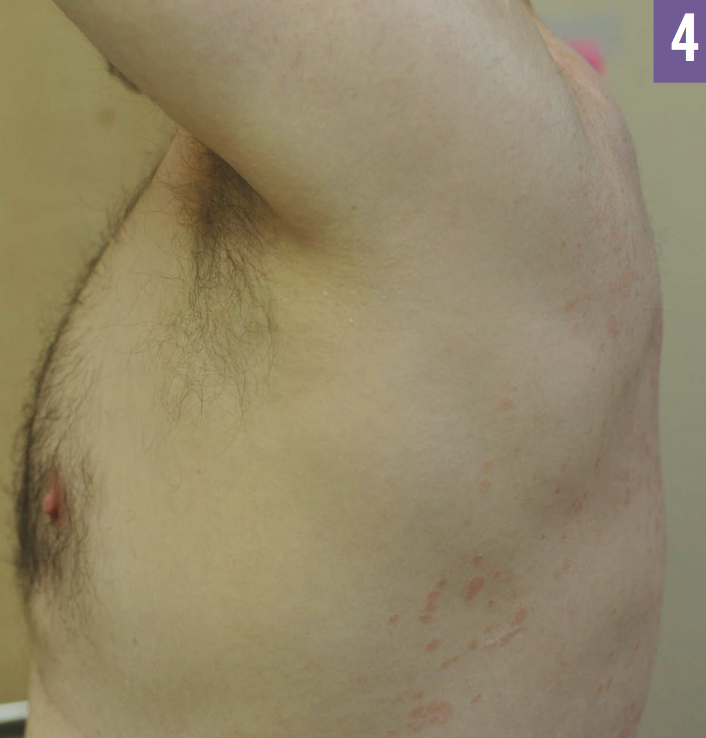 Treatment. Given the widespread extent of the disease, its duration, and its lack of response to topical therapy, we recommended that his primary care provider consider starting systemic antifungal treatment with a regimen of oral fluconazole, 150 mg once weekly for 4 weeks. We also recommended topical ketoconazole shampoo, 2%, applied to the scalp and body for 10 minutes and then washed off, daily for 2 weeks then weekly afterward as preventive therapy.

Outcome of the case. At teledermatology follow-up 6 weeks later, the patient reported that he had tolerated the treatment well and that his symptoms had resolved without complications.

Discussion. First described in 1846 by Eichstedt,1 tinea versicolor is caused by saprophytic, lipid-dependent yeasts in the genus Malassezia that are part of normal skin flora.2 It most commonly affects persons in adolescence and young adulthood, when the sebaceous glands are particularly active, and is not typically seen in young children or elderly persons, except in the case of immunodeficiency.3

Clinically, tinea versicolor presents as 1-mm to 3-cm, round to oval, hypopigmented, hyperpigmented, or erythematous macules, patches, or plaques that coalesce centrally.4 Fine scale is also present and is particularly evident when the skin is scraped or stretched. Tinea versicolor typically occurs on the upper trunk and shoulders, but it can also appear on the lower trunk, neck, and face.4 Azelaic acid is a tyrosinase inhibitor produced by Malassezia furfur and is thought to be the cause of the decreased melanin synthesis, leading to the hypopigmentation in areas affected with tinea versicolor.1

The differential diagnosis includes pityriasis rosea, postinflammatory hypopigmentation, progressive macular hypomelanosis, and vitiligo. These conditions usually can be distinguished based on history and clinical examination findings. Pityriasis rosea tends to present with a herald patch, and its lesions tend to be more scaly and can be erythematous; it is thought to be related to viral infection and can occur following an upper respiratory infection. Postinflammatory hypopigmentation is generally preceded by some inflammatory condition such as nummular dermatitis and is often seen in patients with darker skin types, where it is more readily visible. The lesions of progressive macular hypomelanosis are not scaly, and the patches of vitiligo are depigmented rather than hypopigmented, differentiating them from those of tinea versicolor.

In cases in which the diagnosis is uncertain, a potassium hydroxide preparation can be used to confirm the diagnosis of tinea versicolor, with light microscopy revealing clusters of yeast cells and long hyphae.1

First-line treatment of the condition includes topical ketoconazole, selenium sulfide, and zinc pyrithione.5 Oral fluconazole or oral itraconazole can be used in refractory or widespread cases.5 Tinea versicolor has a high rate of recurrence in the summer months, but topical or oral therapy on an intermittent basis can prevent future episodes.2

This case highlights the classic features of tinea versicolor and emphasizes the utility of teledermatology to treat patients who do not have access to a dermatologist. SAFT allows the patient and dermatologist flexibility in that it is time-independent, can be used in any space, requires short consultation time, and has low costs. As in our case, a high-quality clinical image can highlight the classic features of tinea versicolor and lead to accurate diagnosis and appropriate treatment.