A healthy 37-year-old man presented to the clinic seeking continuing care for a chronic, pruritic, bilateral rash on his lower extremities. The lesions had been diagnosed as psoriasis approximately 3 years previously, for which he had been prescribed topical calcipotriene-betamethasone dipropionate and topical fluocinonide; these agents had provided minimal relief of the rash.

His medical history was negative for joint pain, concurrent skin complaints, or immunosuppressive conditions. He denied a history of having had oral, injectable, or light therapies. 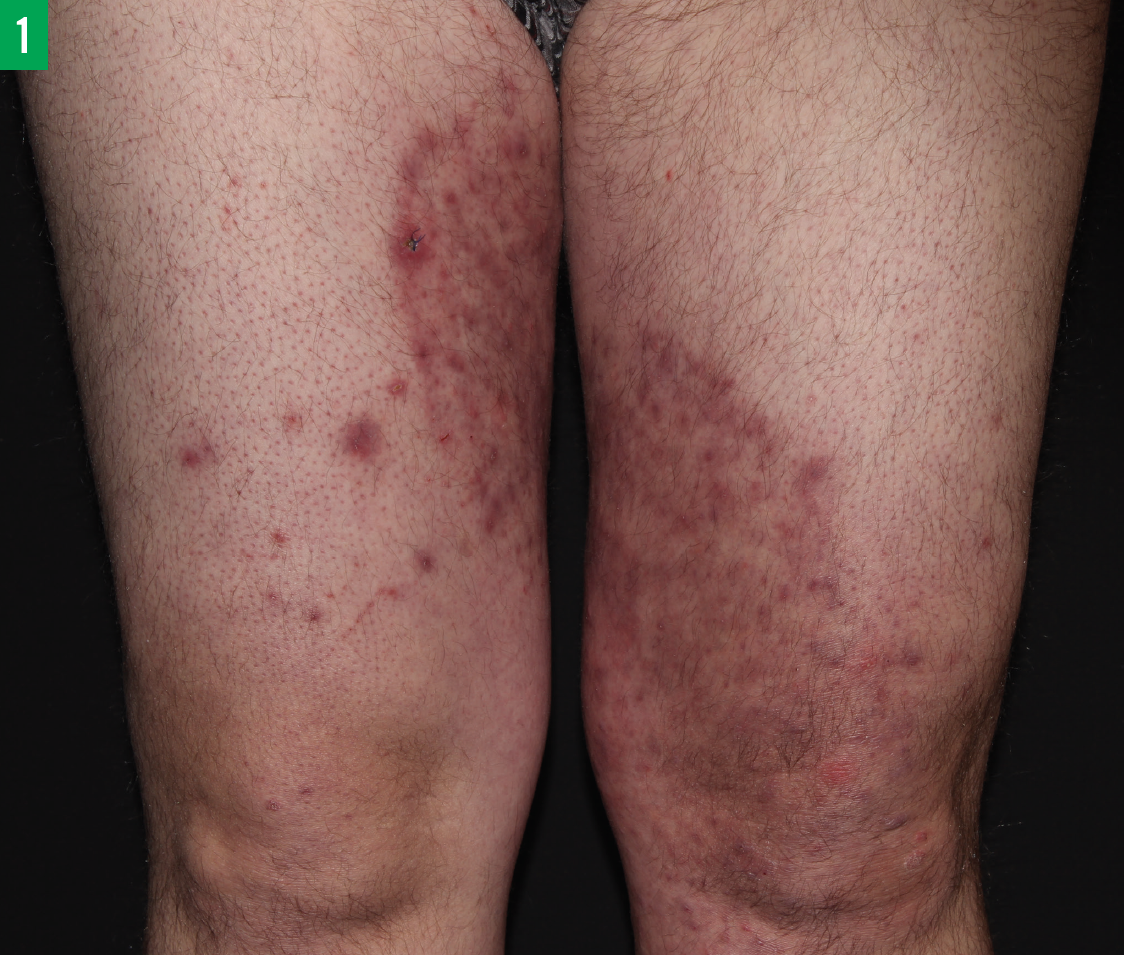 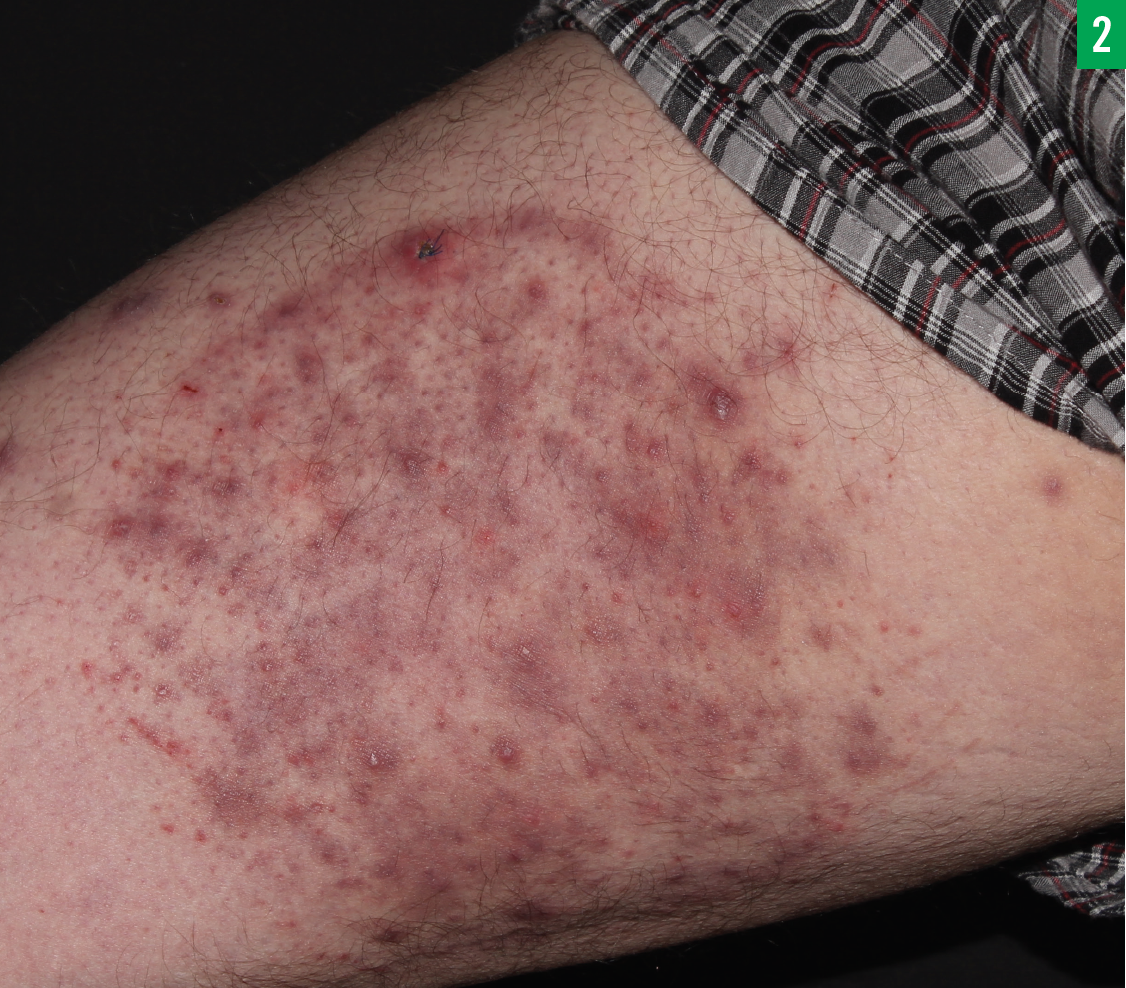 Figure 2. The patient’s recalcitrant lower-extremity lesions at presentation, prior to treatment for tinea incognito.

On physical examination, well-defined erythematous patches and papules with overlying scale were present on the anterior and posterior portion of the lower extremities (Figures 1 and 2). A 4-mm punch biopsy was performed on the right medial thigh, the histology test results of which revealed fungal folliculitis with follicular rupture, abscess formation, granulation tissue, foreign-body reaction, and fibrosis. Gram stain results were negative for pathogenic bacteria. Results of a periodic acid–Schiff stain verified the presence of pathogenic fungi involving the hair follicle, confirming a diagnosis of fungal folliculitis, also known as Majocchi granuloma (MG) (Figures 3 and 4).

Figures 3 and 4. Histology slides of a punch biopsy sample from the right medial thigh, demonstrating suppurative and granulomatous folliculitis, hallmarks of Majocchi granuloma.

The patient was prescribed a regimen of oral itraconazole, 100 mg twice daily for 2 weeks, and econazole nitrate topical foam, 1%, twice daily for 3 weeks. Figures 5 and 6 show the significant improvement in symptoms after 3 weeks. 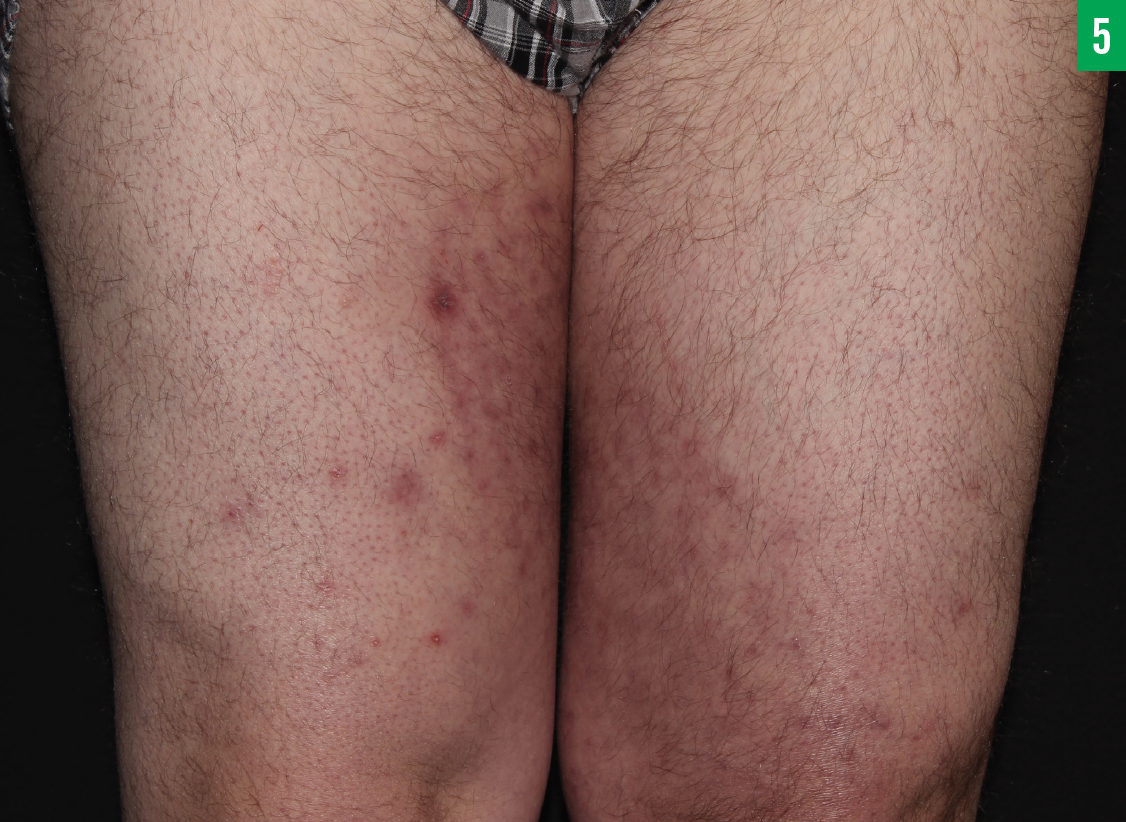 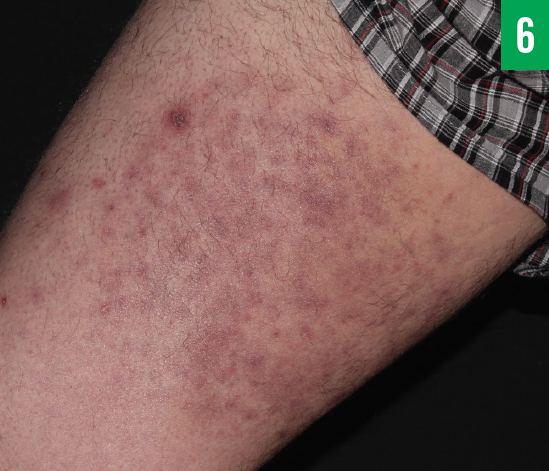 Tinea incognito is a dermatomycosis that presents with a modified appearance on physical examination as a result of the misuse of topical or systemic corticosteroids.1-3 More recently, topical calcineurin inhibitors such as tacrolimus also have been identified as causative agents.2 These therapies reduce the inflammatory response to the dermatophytic infection and allow for fungal proliferation, making an accurate diagnosis difficult.4 Most frequently, tinea incognito is misdiagnosed as an eczema-like dermatosis,1,2,5 but the condition has also been reported to masquerade as stasis dermatitis, psoriasis, contact or atopic dermatitis, discoid lupus, rosacea, lichen planus, purpura, or granuloma annulare.1-3,5

MG commonly manifests as tinea incognito. The condition was first described in 1883 by Italian dermatologist Domenico Majocchi as a traumatic inoculation of the dermis with keratinophilic fungus that results in folliculitis and subcutaneous granulomas.4,6 Previously, it had been understood that 2 separate cohorts developed unique manifestations of MG. The first, a healthy population, acquired MG due to trauma (shaving) or topical corticosteroid use.4,6-8 This group developed a more superficial perifolliculitis that invaded into the dermis.4,6,7 The second cohort acquired MG as a result of a preexisting immunosuppressive condition, such as an autoimmune disease or organ transplant, and were thought to develop nodules and abscesses much deeper in the subcutaneous tissues.4,6-8 The presentations overlap, however, and healthy individuals more commonly present with the deep nodular form.6 Risk factors in both groups include concomitant onychomycosis or dermatomycosis.1,2

Trichophyton rubrum is the most common causative pathogen in cases of MG.1,4,8 T rubrum is an anthropophilic fungi,3 limited to human hosts, and in healthy individuals results in a mild inflammatory response with an inoculation limited to the hair, nails, and stratum corneum, where the fungi feed on keratin.2,4 Typically, T rubrum infection presents as a sharply demarcated, pruritic, erythematous patch or plaque with scale.1 MG is frequently masked as tinea incognito in immunocompetent individuals who have used topical corticosteroids inappropriately. The corticosteroids reduce the symptoms of pruritus, scaling, and erythema by decreasing the cell-mediated inflammatory response.1,2,4,5

While topical antifungals can be successful in the treatment of superficial mycosis, they provide limited relief, because the fungi that reside deep in the dermis will recolonize the skin as soon as topical therapy is discontinued.3,6 Because of this deep invasion, systemic antifungals must be administered for complete resolution of the infection.3,4,6,7 While terbinafine is preferred, given its safety profile and fewer drug interactions, itraconazole has higher lipid solubility, which allows it to penetrate the follicle and be retained in the skin long after therapy has been discontinued.3,4,6,9 Resolution commonly is attained after 6 weeks of systemic therapy.4 Gupta and colleagues9 demonstrated that itraconazole pulse treatment of 200 mg twice daily (1 week on, 2 weeks off) frequently resulted in successful resolution after 2 cycles.

As a result of the increased use of systemic corticosteroids for nondermatologic conditions and the widespread use of topical anti-inflammatory agents such as corticosteroids and calcineurin inhibitors, the incidence of tinea incognito is on the rise.1,2 Because of the elusive nature of the etiology, it can take months before proper diagnosis and management of tinea incognito is initiated. It is imperative in cases of recurrent dermatosis that further investigation take place early on in order to limit the use of agents that may be perpetuating the condition.2 Superficial potassium hydroxide test samples are often negative for fungi due to the deep dermal infiltration. A biopsy, which includes the follicle, with staining and culture testing is the gold standard for diagnosis.6

Michelle Dyrholm, MS-IV, is a fourth-year student at the Arizona College of Osteopathic Medicine at Midwestern University in Glendale, Arizona.

Emily Rubenstein, DO, is director of the Swedish Skin Institute at Swedish Covenant Hospital in Chicago, Illinois.