A 16-year-old healthy boy with no significant past medical history presented to the emergency department (ED) with sudden-onset, severe, sharp, intermittent lower abdominal pain, worse on the left side, with no radiation. The pain had started 30 minutes prior to arrival, soon after he had eaten a homemade quesadilla. He had no associated fever, nausea, vomiting, diarrhea, or dysuria. He reported having mild constipation with bowel motions every 2 to 3 days, occasional straining, and hard stools but no blood.

Physical examination. The patient looked uncomfortable but nontoxic. He was afebrile, with stable vital signs. General and abdominal examination findings were benign. The initial clinical impression was of early gastroenteritis or constipation.

The patient denied scrotal pain but had mild left testicular tenderness. The testicles were of the same size and showed normal lie and normal cremasteric reflex. There was no scrotal discoloration.

Abdominal radiographs and urinalysis were ordered, and he was given a dose of acetaminophen.

He vomited food 30 minutes after arrival and reported improvement in abdominal pain after having vomited.

Urinalysis results were normal, and abdominal radiographs showed moderate amount of stool throughout the colon.

During continued observation in the ED, about 2 hours after arrival, he reported feeling much better, rated the pain at 1 of 10, and had no further nausea or vomiting. Abdominal examination findings remained benign.

At 4 hours after the onset of pain, testicular ultrasonography was performed in view of the persistent mild left testicular tenderness noted during the initial examination. The results revealed left testicular torsion with an absence of blood flow to the left testis (Figures 1-5). The scrotal skin was of normal thickness with no hyperemia. The testis demonstrated normal size and echogenicity, but the epididymal head was enlarged and ill-defined, with prominent cystic features indicative of infarction. A small hydrocele was also present. The spermatic cord was normal, with no signs of torsion in the inguinal canal. 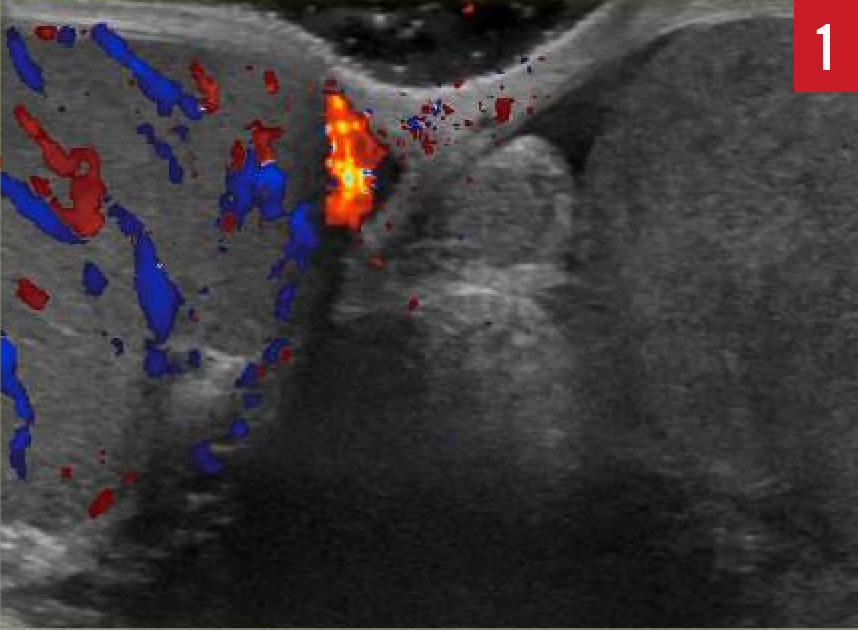 Figure 1: The right testicle had normal flow, but the left testical had no flow. 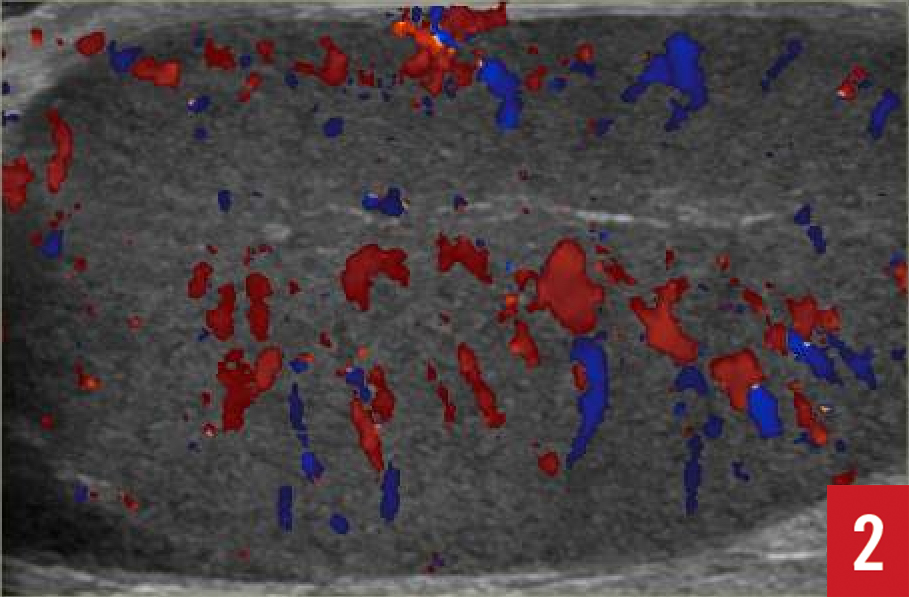 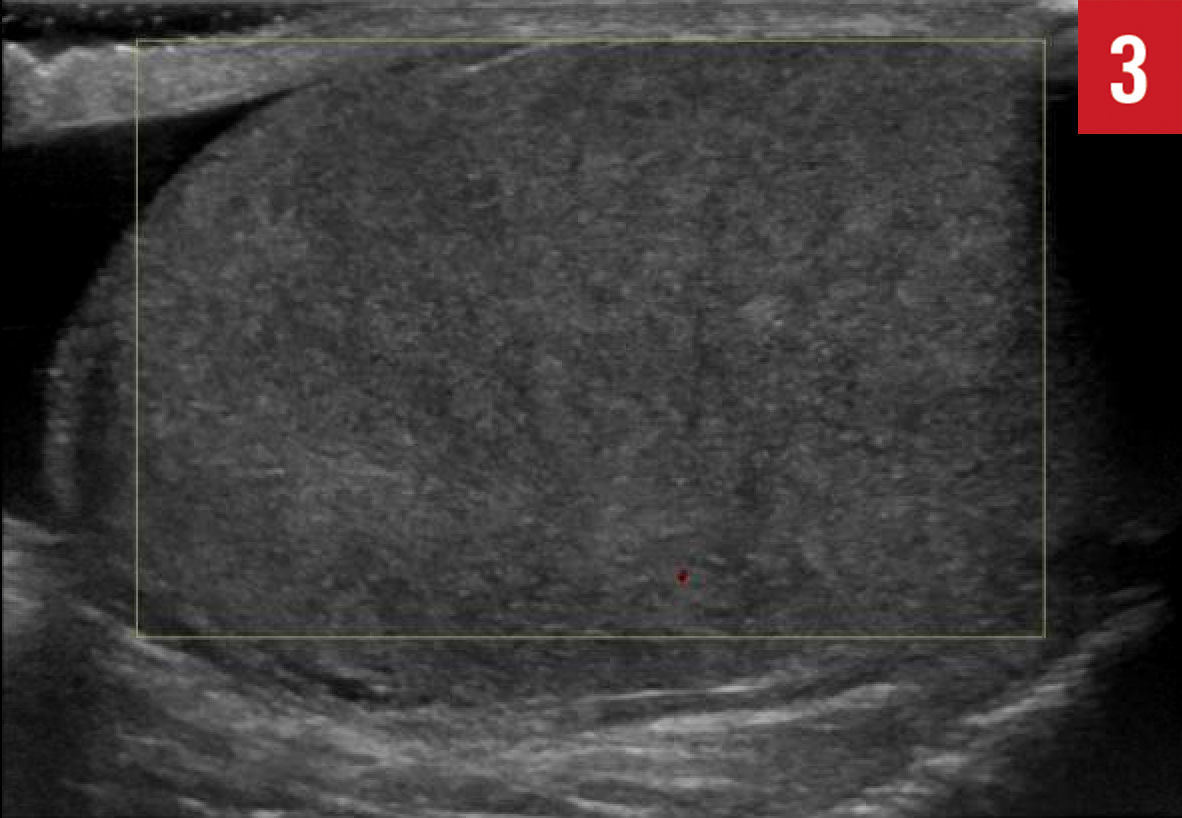 Figure 3: The left testicle was normal in size and echogenicity but had no flow. 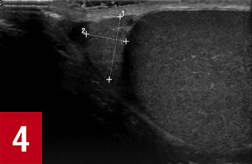 Figure 4: Right epididymis was normal in size and echogenicity. 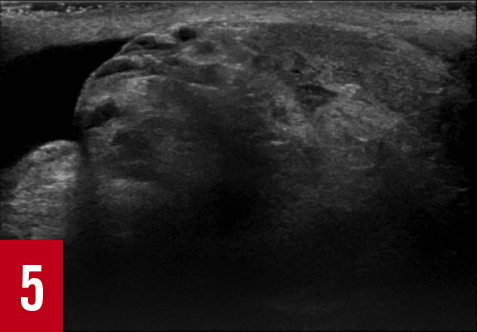 A urologist was consulted, and surgery was performed approximately 5 hours after the onset of pain. A 360° twist was found in the spermatic cord, with a resulting blue but salvageable testicle. Orchiopexy was performed, and the patent was discharged in stable condition.

Discussion. Testicular torsion is usually diagnosed using color Doppler, which has high sensitivity and specificity in detecting torsion.1 Findings on grayscale ultrasonography of the testis may be normal in the first few hours, as was the case with this patient.  The testis later develop hyperechoic, hypoechoic, or heterogeneous patterns as they become non-viable.1 The epididymis is supplied by a branch of the testicular artery and can also become avascular, enlarged, and hyperechoic in testicular torsion.1 Observation of the position and morphology of the epididymis is thus an important part of the evaluation. The whirlpool sign (twisting of the spermatic cord at the external inguinal ring) has a 100% specificity and sensitivity for testicular torsion.1

This patient’s case was unique in several respects. First, he did not report any scrotal or testicular pain during the entire episode. Second, his severe abdominal pain interfered with the detection of mild testicular tenderness at presentation; only after his abdominal pain had improved was it possible to confirm the presence of scrotal tenderness. Finally, the other signs typically associated with testicular torsion were absent, and the suspicion came solely from the presence of scrotal tenderness.

Testicular torsion is third in the list of causes of malpractice suits in adolescents aged 12 and 17 years2 and usually presents with scrotal pain. However, abdominal pain as the sole presenting feature of testicular torsion is a well known scenario, and several case reports and series in the literature illustrate this presentation. The largest retrospective study on this subject found a 10.7% incidence of solitary abdominal pain without scrotal pain in 84 patients with confirmed testicular torsion.3 The study reported that a genital examination was not performed on the initial visit in 6 of the 9 patients who presented with abdominal pain alone, and that 5 of these 6 patients needed an orchiectomy for a nonviable testis when the diagnosis was made after a mean duration of 39 hours after onset of pain. Other studies report an 11% to 12.5% incidence of abdominal pain as the sole presenting feature of testicular torsion.4-6 Presentation with abdominal pain is related to the abdominal location of the testes in the embryonic period, and the fact that the nociceptive pain fibers to the testis are derived from spinal nerves T10 and T11.3

The two main lessons to learn from this case are that it is important to perform a careful genital examination in all male patients presenting with abdominal pain and to consider a diagnosis of testicular torsion even in the absence of typical clinical signs of torsion.