A Teenager With Yellow, Atrophic, Eroded Teeth: What’s the Cause?

A 17-year-old young woman presented to the clinic with her mother for an initial sick visit. Her chief concern was stabbing back pain that radiated to her shoulders and abdomen. The back pain had started 1 week ago and had lasted for 2 days; the pain had been followed by fatigue, tiredness, and upper-body weakness for the past week. Her other concerns included a sore throat 2 weeks ago.

She had no pertinent past medical history, and she had not seen a doctor in the past few years.

On review of systems, she was generally healthy, with no other complaints except for upper-body weakness, oral tenderness, abdominal pain, and fatigue. On physical examination, she was well-developed and well-nourished, without any signs of abuse or neglect. The rest of the physical examination findings were normal, except for the oral examination. When she was asked to open her mouth, halitosis was noted, along with yellow, atrophic, and tender teeth filled with erosions.
Upon inquiry, the patient’s mother reported that her daughter’s adult teeth had erupted yellow and had always appeared this way. The mother denied having used any antibiotics during pregnancy, and she denied the intake of any antibiotics by her daughter before the age of 8. 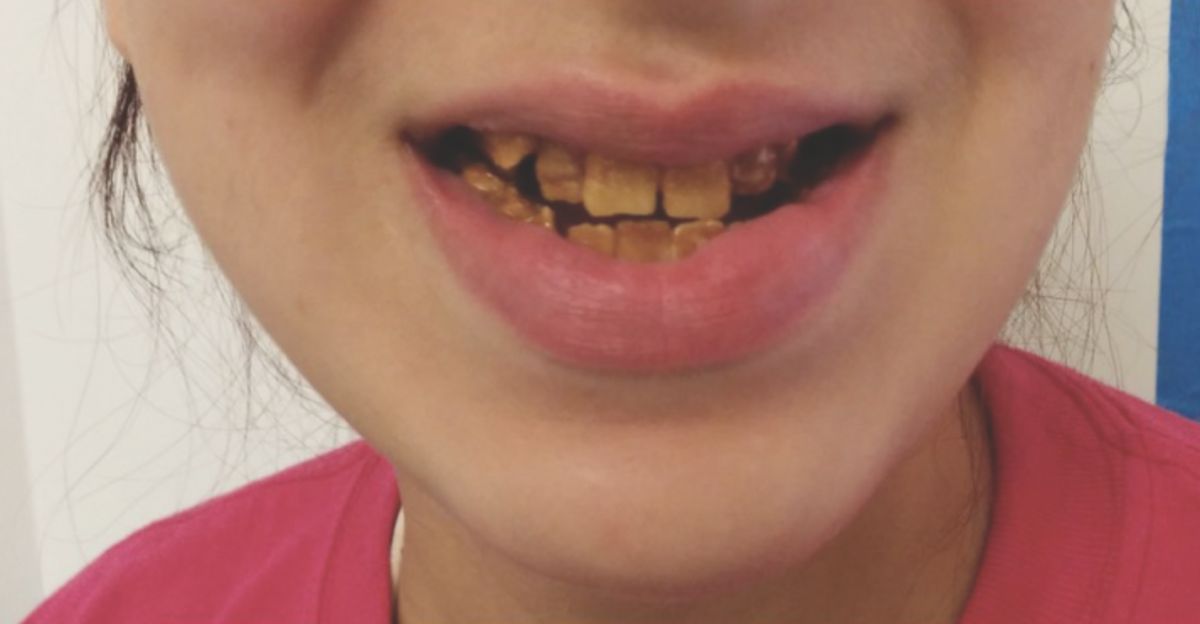 The patient denied smoking, alcohol use, and illicit drug use. She is an only child. Her mother had been adopted from Germany, with no known family history, and her paternal family is generally healthy. The mother denied any oral abnormalities in family members and was uncertain of the cause of her daughter’s oral condition.
Results of a rapid strep test were positive. Genetic testing, a complete blood count, Epstein-Barr virus testing, and a thyroid panel were ordered. Results of a Beck Depression Inventory screening test were negative.

What is causing this girl’s poor dental health?

An initial clinical diagnosis of strep throat was made with a suspicion of a simultaneous EBV infection. Antibiotics were prescribed, and the patient was sent home with strict sports restriction.

After 2 days, the laboratory test results returned positive for EBV, but with normal levels of thyroid-stimulating hormone and free thyroxine, and normal values for hemoglobin and hematocrit. However, the genetics laboratory stated that it does not perform genetic testing for AI; in fact, none of the genetics testing laboratories in United States other than research laboratories test for AI.1 Nevertheless, based on her presentation and the results of a visual examination, the girl received a clinical diagnosis of AI.

AI is a group of genetically inherited disorders that affect tooth development. The precise incidence of AI is not known, with estimates ranging 1 in 700 people in northern Sweden to 1 in 14,000 people in the United States.2

AI is classified into 4 main types based on enamel thickness, clinical appearance, pattern of inheritance, and radiographic appearance of the teeth.3

Type I, hypoplastic AI, is a milder form characterized by small teeth that are off-white to yellow in color, with slightly thin and smooth enamel. Patients also may present with ridges and pitting of enamel and with a poor bite due to misalignment of the upper and lower teeth.3

Type II, hypomaturation AI, is a mild to moderate form of the condition characterized by roughly surfaced teeth with a cream to yellow-brown appearance. Patients tend to have an open bite due to teeth misalignment, with enamel of normal thickness. However, the teeth are brittle and tender to the touch.3

Type III, hypocalcified AI, is a mild to severe form of AI with teeth that are roughly surfaced and are creamy to yellow-brown colored. Patients usually have an open bite with a substantial amount of calculi (stony white precipitates formed due to the fluids of the mouth) between their teeth. Moreover, patients’ teeth bleed easily and usually are tender and sore to the touch.3

Type IV, hypomaturation/hypoplasia/taurodontism, is a severe form of AI. Patients with type IV AI have small teeth that appear to be spotted and atrophic. The enamel usually expresses a yellow-brown discoloration with easily visualized areas of atrophy. Type IV usually is inherited in an autosomal dominant pattern.3

AI has been linked to several genetic mutations that interfere with the normal development of enamel. However, 4 genes are most commonly mutated in AI: AMELX, ENAM, FAM83H, and MMP20.4

AMELX is located on the X chromosome and encodes for amelogenin, a protein that is essential for enamel production. Enamel is composed mainly of microscopic mineral crystals structured in an organized, parallel manner to form hard bundles. Amelogenin separates these crystals as they grow and supports them during maturation. Once the crystals are strong enough, amelogenin is no longer needed and is discarded.5 However, if amelogenin is not discarded as a result of mutations in the gene, it remains between the crystals and prevents them from bundling together, causing weak and atrophic teeth with distinctive vertical grooves.6

Mutations in ENAM, the enamelin gene, can be inherited in an autosomal dominant or an autosomal recessive pattern. Autosomal dominant mutations decrease the production of enamelin, which is an extracellular matrix protein required in the formation of mature enamel. However, the autosomal dominant mutated form of ENAM does not interfere with the function of normal protein produced by the other copy of the ENAM gene. Since the other copy of ENAM is normal, it produces a normal enamelin protein, and a milder phenotypic disorder is observed, with defects in teeth comprising shallow pits or horizontal grooves.7 On the contrary, autosomal recessive ENAM mutations cause the entire production of enamelin to be abnormal. Hence, patients who have an autosomal recessive ENAM mutation present with severe teeth defects, with very thin or absent enamel.7

Mutations in FAM83H are inherited in an autosomal dominant fashion, and the AI caused by this mutation is most prevalent type of AI. The function of the protein for which FAM83H encodes is not well understood. However, all of the known FAM83H mutations produce an abnormally short form of this protein.8 Moreover, the abnormal protein is located in the nucleus of ameloblasts instead of the cytoplasm, where the normal protein usually is found. Additionally, the altered protein interferes with the functional protein produced by the normal copy of the gene, known as a dominant-negative mutation, where one mutated gene paralyzes the other normal gene.8

Mutations in MMP20, the matrix metallopeptidase 20 gene, are inherited in an autosomal recessive pattern. The gene encodes for enamelysin, a peptidase that cleaves proteins such as amelogenin and ameloblastin involved in enamel formation. If enamelysin is dysfunctional, amelogenin and other proteins are not cleaved, and enamel fails to harden, resulting in soft, discolored, damage-prone enamel.9

Early diagnosis and treatment of AI is extremely important because of its effects on a patient’s eating habits, psychological health, and social health. Because AI is an inherited disorder, it is not possible for a person to prevent passing the condition on to his or her children. Due to the unwholesome appearance of the mouth in AI, patients can become depressed and can become suicidal. Therefore, depression screening in patients with AI is essential.

After a visual examination of her teeth, our patient received a diagnosis of a type III hypocalcified AI. She had an open bite, a substantial amount of calculi between her teeth, which were sore and tender. Because her maternal family history is unknown and her paternal family history was negative for dental disorders, it is difficult to determine the inherited pattern or the genetic mutation the patient is carrying.

Mohammed A. Khan, HBSc, is a student at Ross University School of Medicine in Dominica, West Indies.

Nida Hameedi, BSc, is a student at Ross University School of Medicine in Dominica, West Indies.

Nida Blankas-Hernaez, MD, is affiliated with the Pediatric Faculty Foundation at Ann and Robert H. Lurie Children’s Hospital of Chicago. She is on staff at Advocate Lutheran General Hospital in Park Ridge, Illinois; is chair of the Pediatrics Department at Norwegian American Hospital in Chicago, Illinois; and is pediatric core director at Ross University School of Medicine.