A Teenager With Ring-Shaped Papules and Plaques on His Legs

A 15-year-old boy presented with asymptomatic, erythematous papules and plaques with an annular pattern on the legs. The lesions have been present for 6 months and have slowly increased in size. He was in good health and was not taking any medication. There was no family history of similar skin lesions.

Physical examination revealed multiple erythematous, firm, nonscaly papules and annular plaques localized to the extensor surfaces of both legs. Some of the lesions had an annular configuration with a clearer center and slightly elevated and indurated borders composed of small papules. The rest of the physical examination findings were normal. 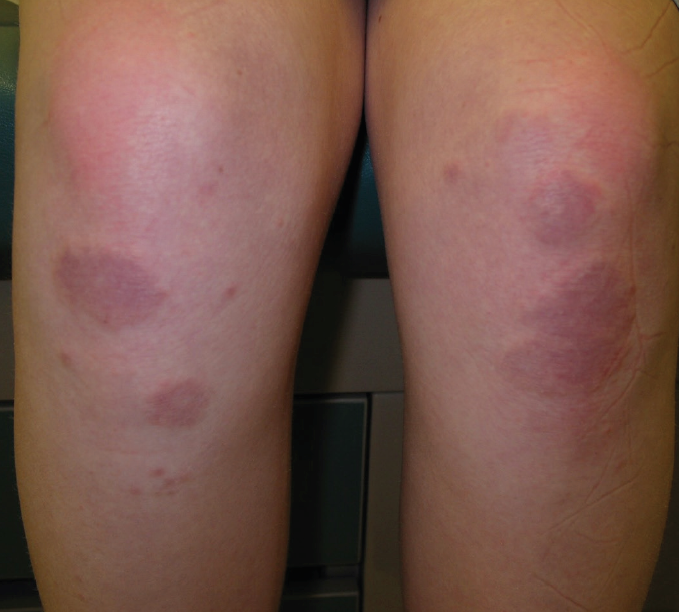 Granuloma annulare is a benign and usually self-limited granulomatous disease of the dermis and subcutaneous tissue.1 Clinically, the condition is characterized by asymptomatic, firm, flesh-colored or erythematous to brown papules, which classically are arranged in an annular, circinate configuration and which usually involve the extensor surfaces of the distal extremities.2

Although the point prevalence of granuloma annulare in the community is not known, it is estimated that 0.1% to 0.4% of new patients attending dermatologic clinics have granuloma annulare.2 There is no known predilection for race or ethnicity. Most cases of granuloma annulare occur before the age of 30 years; the condition is especially common in school-aged children.3,4 The female to male ratio is approximately 2 to 1.3

The presence of helper T cells with histiocytes in the inflammatory infiltrate in granuloma annulare suggests that a delayed hypersensitivity and cell-mediated immune response to an antigen contribute to the pathogenesis.3,5

Histologic examination of a classic lesion shows central degeneration of collagen fibers and mucin deposits surrounded peripherally by palisading histiocytes and inflammatory cells.1,5,7 The presence of mucin is a key histologic feature that helps to distinguish granuloma annulare from other noninfectious granulomatous diseases.6

Localized granuloma annulare is the most common form in children, comprising 75% of cases.2,3 The lesion starts as a ring of small, smooth, firm, asymptomatic, erythematous, violaceous, brown or flesh-colored papules.3,5 As the condition progresses, some central involution occurs.3 The ring of papules often becomes coalescent to form an annular plaque. The lesion gradually enlarges to usually less than 5 cm in diameter. Typically, lesions are solitary or few in number.7 Sites of predilection include the dorsal surfaces of the hands and feet.3

Subcutaneous granuloma annulare is diagnosed primarily in children and young adults.4,10 The lesion usually presents as solitary or multiple painless, flesh-colored, subcutaneous nodule(s) with no inflammatory appearance at the skin surface.1,10 Sites of predilection include the pretibial areas, feet, forearms, hands, fingers, scalp, and forehead.2,10

Interstitial granuloma annulare manifests as asymptomatic, erythematous or violaceous patches without scales or papules that may or may not have an annular configuration.8 Sites of predilection include the trunk and extremities.8

Perforating granuloma annulare is rare. It presents with papules that are 1 to 5 mm in diameter and occurs more often on the dorsa of the hands and feet.8,9 Characteristically, these papules have a yellowish central umbilication or crusts and are well-demarcated.8 Perforation occurs in the central portion of the lesion through which mucoid material consisting of degenerated collagen fibers is eliminated.6,9 Itching occurs in up to 25% of cases, especially when there are lesions on palms.9

The diagnosis is mainly clinical and can be aided by dermoscopy, which typically shows peripheral, structureless, orange-reddish borders.13 Skin biopsy is warranted for atypical cases or when the diagnosis is unclear, particularly to rule out other granulomatous conditions such as sarcoidosis.

Localized granuloma annulare usually resolves without scarring within 1 to 2 years.2,7 Other forms may persist for a few years or more.3 A shorter duration is associated with younger age and recent onset.10 The recurrence rate is approximately 40%.7

Most cases of granuloma annulare are asymptomatic and self-limited. As such, treatment usually is not required other than reassurance.7 For patients who insist on treatment for cosmetic or symptomatic reasons, options include potent topical or intralesional corticosteroids, cryotherapy, and pulsed dye laser therapy.3,7 Less commonly, topical imiquimod cream or topical calcineurin inhibitors (tacrolimus, pimecrolimus) are employed. Surgical removal is an option for the nodular lesion seen in subcutaneous granuloma annulare.2 Systemic therapy may be required for generalized granuloma annulare, which often is resistant to treatment.7 Interventions that have been used with varying degrees of success include phototherapy, oral corticosteroids, fumaric acid esters, dapsone, isotretinoin, hydroxychloroquine, methotrexate, cyclosporine, niacinamide, calcitriol, and tumor necrosis factor-α inhibitors (adalimumab, infliximab).3,6

This patient was treated by his dermatologist with potent topical corticosteroids applied nightly, as well as narrowband UVB phototherapy 3 times per week for just over 2 months, which resulted in complete clearance of the lesions and mild postinflammatory hyperpigmentation.