A Teenager With a Rash on Her Face, Chest, and Palms: What’s the Culprit?

A 14-year-old girl presented with a 3-month history of a rash and a sore on her tongue. She denied fever, sick contacts, or recent travel.

She visited other health care providers who had diagnosed atopic dermatitis, canker sores, and rosacea, but after treatment for these conditions, the symptoms had persisted. Her current medications included a contraceptive implant, etonogestrel. She had been sexually active for a year, had had 3 partners, and had always used condoms.

Findings on physical examination included an ulcer on the tongue, hyperpigmented plaques in the nasolabial folds and chin (Figure 1), hyperpigmented maculopapules in the lines of cleavage of the chest (Figure 2), and papulosquamous lesions on her palms (Figure 3). The rest of the examination findings were normal. 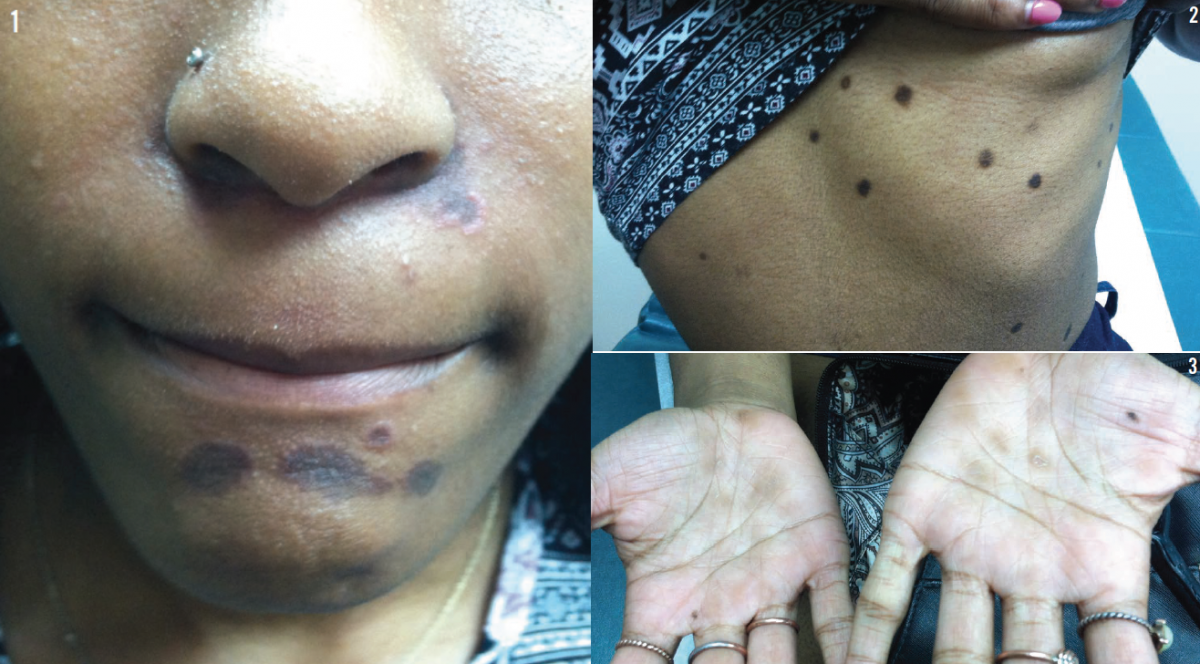 Although the prevalence of primary and secondary syphilis has decreased significantly since the mid-20th century, case counts and rates are rising.1,2 Data for sexually transmitted illnesses (STIs) begins with the 15- to 24-year-old age group, which represents a quarter of the sexually experienced population yet accounts for half of all new STIs.3 The Centers for Disease Control and Prevention does not provide data about younger adolescents and STIs.

Syphilis, caused by the spirochete T pallidum, is acquired through sexual contact. The incubation period ranges from 3 weeks to 3 months after exposure. Primary syphilis, the first of the disease’s distinct stages, is characterized by painless ulcers (chancres) at the site of contact. Because they are painless and usually occur in the vagina of female patients, they often go unnoticed and disappear in 1 to 3 months. If the condition remains undiagnosed and untreated, hematogenous spread occurs, and secondary syphilis follows.

Secondary syphilis is characterized by malaise, fever, generalized lymphadenopathy, and rashes that may be macular, papular, papulosquamous, or bullous and typically include the palms and soles. In moist areas around the vulva and anus, hypertrophic papular lesions (condylomata lata) can occur. Our patient’s oral ulcer resembled the chancre of primary syphilis; in secondary syphilis, this lesion is called a mucous patch. Diagnosis requires a reactive treponemal test and a nontreponemal titer greater than 1:4. Like primary syphilis, secondary syphilis resolves without treatment in 1 to 3 months, and individuals become asymptomatic again. 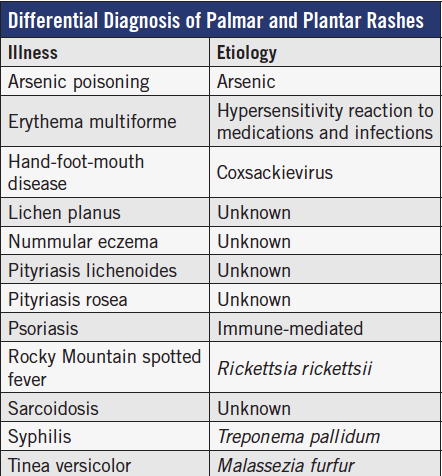 ent syphilis. The term latency of unknown duration has been eliminated.3 Tertiary syphilis occurs 15 to 30 years after infection, but neurosyphilis can complicate any stage of infection. Primary, secondary, and early-latent syphilis are highly contagious, but treatment for all is the same: a single injection of long-acting penicillin G benzathine (2.4 million units).

Our patient’s case shows that syphilitic rashes can mimic other illnesses and cause diagnostic confusion. The disease, infamously known as “the great imitator,” is one of only a few that presents with palmar and plantar lesions (Table).

Laura Rosas, BBA, is a medical student at the University of Texas Medical School at Houston.

Susan H. Wootton, MD, is an associate professor in the Department of Pediatrics at the University of Texas Health Science Center at Houston.

Lynnette Mazur, MD, MPH, is a professor in the Department of Pediatrics at the University of Texas Health Science Center at Houston.