A Teenager With Abdominal Pain After Appendectomy: What Does CT Show?

A 16-year-old boy presented to the emergency department with 2 weeks of worsening lower abdominal pain. Ten weeks ago, he had been hospitalized for a perforated appendicitis and had undergone laparoscopic appendectomy. 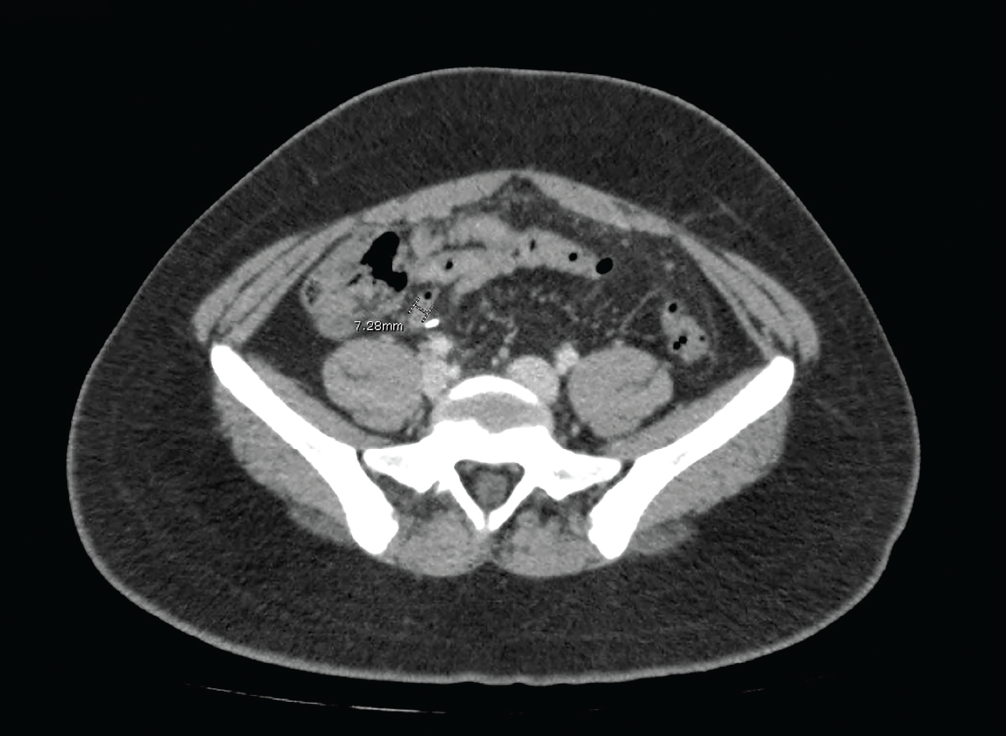 What is causing this boy’s abdominal pain?

(Answer and discussion on the next page.)

The appendix originates from the posterior-medial wall of the cecum, 3 cm distal to the ileocecal valve. As the teniae coli converge, the colon transitions to the appendix. The location of the appendix is variable and can be retrocecal, retroileal, subcecal, preilial, or pelvic.1 Although the function of the appendix is not clear, it may serve an immunologic role with its numerous lymphoid follicles.

From infancy to childhood, the appendix becomes more conical and less tubular, allowing for the lumen to become more easily obstructed.2 During adolescence, lymph nodes within the intestinal lining reach their peak size. For these reasons, the incidence of appendicitis is highest during the teenage years.2

The pathophysiology of appendicitis begins with luminal blockage from fecal matter, undigested food, lymphoid follicles, or appendiceal torsion.3 Distension of the obstructed appendix leads to mural thickening, disruption of the mucosal barrier, bacterial penetration, and ultimately, ischemia, gangrene, and perforation.3

In children, appendicitis is the most common reason for emergency abdominal surgery and accounts for 1% to 8% of cases of acute abdominal pain.4,5 The rate of wound infection or abscess after appendectomy is 1% to 5%.6 Other complications can include bleeding, incisional hernia, small bowel obstruction, and stump appendicitis (SA).1

SA is inflammation of the residual appendix following appendectomy. SA is rare and occurs in 1 in 50,000 cases after appendectomy.7 With the increased use of laparoscopic appendectomy beginning in the early 2000s, more cases have been recognized.8 Although laparoscopic appendectomy has been considered a risk factor for SA, this association has not been substantiated in the literature.8 Risk factors include incomplete removal of the appendix and insufficient inversion of the residual stump.8 In particular, a stump of greater than 5 mm is associated with an increased risk for SA.9

Timing of presentation is variable and ranges from 2 months to 50 years after appendectomy.1 Signs and symptoms are similar to acute appendicitis. Most patients present with a white blood cell count above 14,000/µL.1 CT is the imaging modality of choice. SA is associated with a 70% perforation rate, which is much higher than the rate of perforation in appendicitis (27.3%).10

Few cases of SA have been treated successfully with intravenous antibiotic therapy8; however, given the high rate of perforation, surgical removal of the appendiceal stump is the treatment of choice.

SA is a rare complication after appendectomy. Clinicians should be aware of SA so as not to exclude appendicitis as a cause of acute abdominal pain in a patient who has undergone appendectomy. Treatment of choice is surgical resection.

Our patient received a 1-week regimen of intravenous cefotaxime and metronidazole and was discharged home on oral ciprofloxacin and metronidazole for another week. He was doing well without complications at follow-up 9 months later.