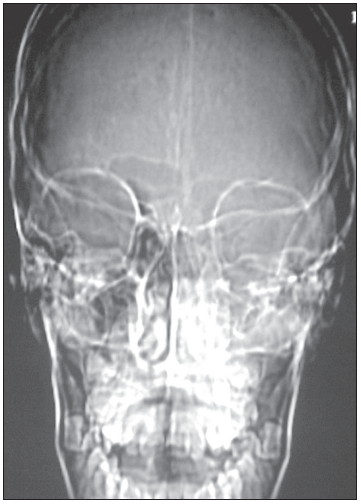 A 13-year-old boy presented with marked periorbital swelling of the left eyelid that started 12 hours earlier. His eyelashes and lid were matted with yellow discharge. He did not wear contact lenses or eyeglasses and denied ocular trauma or foreign bodies. He had been nauseated and vomited once; his mother attributed these symptoms to an antibiotic he had been taking for 5 days for a sinus infection. The medical history was noncontributory; there was no family history of ocular problems.

The patient was in moderate discomfort. He complained of blurred vision in his left eye, eye pain that worsened when he looked to the left, left facial pain, and congestion with greenish nasal discharge.

Significant proptosis of the left eye was evident when the lid was retracted, along with mild diffuse erythema and edema of the conjunctiva. No foreign 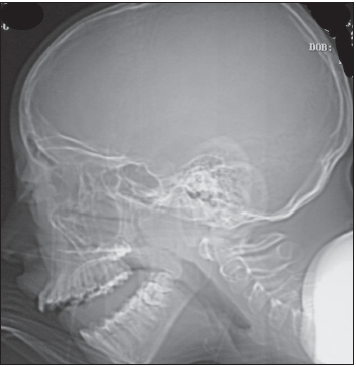 bodies were noted. The patient was unable to perform lateral gaze with his left eye. His pupils were equally round and reactive to light and accommodation. The right eye was normal.

The area over the left maxillary sinus was tender. The neck was supple, with a mild left anterior adenopathy. Heart, lungs, and abdomen were normal. The patient was alert and oriented; no sensory loss was detected in the infraorbital or supraorbital areas.

The patient was given an intramuscular injection of an antibiotic. A sample of the eye discharge was obtained for culture and an ophthalmologist was consulted. Radiographs of the sinus were ordered.

To what diagnosis do the clinical picture and radiographs point--and what further investigation is warranted? 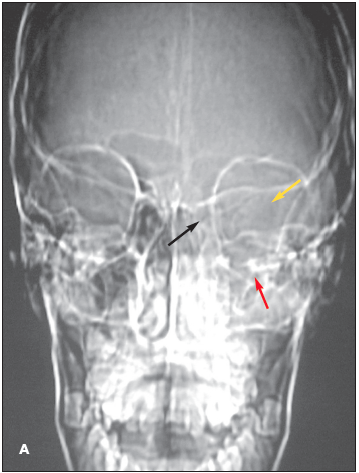 Intraorbital abscess: The radiographs demonstrate opacity of the ethmoid air cells on the left (A and B, blackarrows) with increased opacity of the left maxillary antrum, which is best seen on the frontal view (A, red arrow). The sphenoid and frontal sinuses are unremarkable. The increased density seen on the films results from the filling of the normally aerated sinuses with opaque material (in this case, mucus). 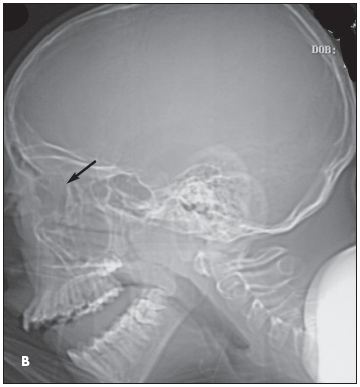 Close inspection also reveals increased density of the left orbit (A, yellow arrow). This density is attributable to edema.

Orbital cellulitis almost always results from an infectious process within the adjacent paranasal sinuses that has extended into the orbits via the valveless facial veins. The organisms typically involved are staphylococci, streptococci, and pneumococci. Potential complications include abscess formation, subdural empyema, cavernous sinus thrombosis, cerebral abscess, and osteomyelitis. 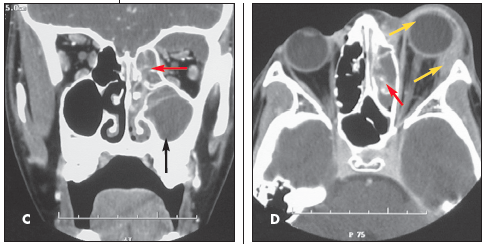 This case illustrates 3 of the 4 stages of orbital inflammation caused by paranasal sinusitis:

•Stage 2: development of a subperiosteal abscess.

•Stage 3: proptosis and impaired ocular motility from diffuse inflammation of the soft tissues within the orbits.

Stage 4 is the intraorbital abscess.

This patient was admitted for administration of intravenous antibiotics and surgical drainage of the infected sinuses and subperiosteal abscess. He was subsequently discharged from the hospital with no visual deficits. *