An 18-year-old college student presented to the emergency department (ED) with a 3-day history of cough and chest pain that had begun at rest 1 hour after having eaten dinner. The pain was mild initially but had suddenly worsened while he was walking to class. He went to the university health center, where he was observed to be diaphoretic, tachycardic, and short of breath. Electrocardiography results were unremarkable. 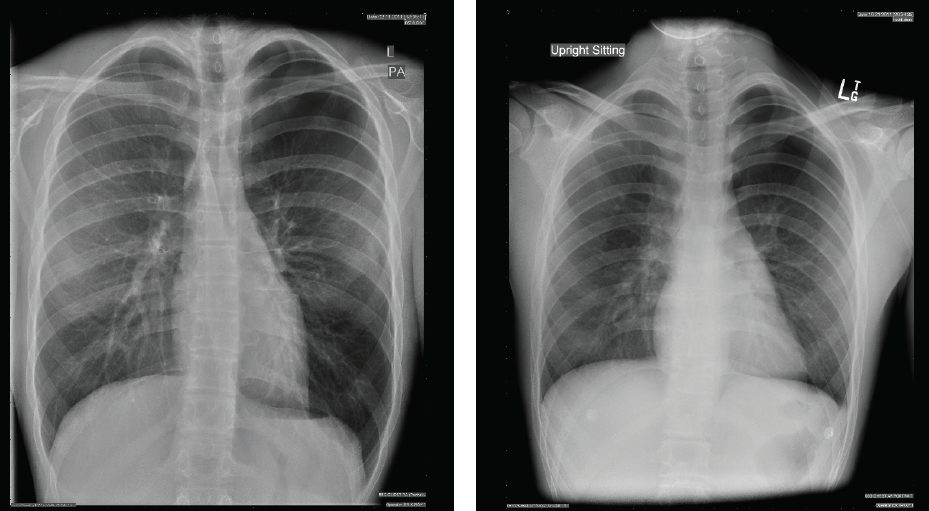 The patient had a history of asthma but had not used his inhaler for several years. He had never had an episode of chest pain similar to this one. Family history was noncontributory. He admitted to smoking 1 or 2 cigarettes per day and to smoking marijuana 1 or 2 times per week. He was a music major and played the trumpet. He did not participate in any sports.

He stated that he had sharp and constant pain in the left chest with an intensity of 7 on a 10-point scale. Auscultation revealed tachycardia without murmur, along with decreased breath sounds and hyperresonance over the left upper lung field.

Stat chest radiographs were taken in the ED and revealed the diagnosis.

How do you read these images?

The radiographs (Figures 1 and 2) revealed a moderate left apical spontaneous pneumothorax. A chest tube was placed, after which the patient’s condition improved. Chest computed tomography (CT) was performed the next day to look for blebs, and results showed no apparent lung disease (Figure 3). After 48 hours, the chest tube was removed at the bedside. Radiographs confirmed the persistence of a small left apical pneumothorax. The patient was placed on 100% oxygen by nonrebreather mask overnight and then was discharged home the next morning.

Ten days later, he returned to the ED with a recurrent moderate pneumothorax. Because this was the second occurrence, he underwent video-assisted thoracoscopic surgery with partial lobectomy and pleurodesis to prevent recurrence. Pathology results revealed congenital blebs that were too small to have been detected on CT scans.

Primary spontaneous pneumothorax in adolescents is rare, with an estimated annual incidence of 7 to 18 per 100,000 in boys and 1 to 6 per 100,000 in girls.1 Risk factors include cigarette smoking, being tall and thin, and being between 10 and 30 years of age.1 Many adolescents with primary spontaneous pneumothorax will have a recurrence within 3 years of the initial event.2 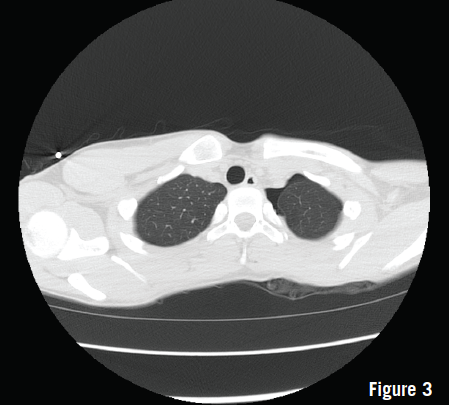 Physical examination findings may include tachycardia, respiratory distress, decreased breath sounds, hyperresonance on the affected side, and a trachea that deviates to the opposite side.2

Initial management includes 100% oxygen and chest radiography (upright or lateral decubitus) to determine the size of the pneumothorax. Chest CT may be useful to find blebs or other underlying lung disease. Small or asymptomatic pneumothoraces (less than 15% of the involved lung) can be managed conservatively or treated with oxygen washout, in which 100% oxygen is administered by nonrebreather mask. Large, symptomatic pneumothoraces require needle aspiration or placement of a chest tube or pigtail catheter.2 Definitive treatment involves removal of any damaged lung tissue and/or pleurodesis.