T-Cell Lymphoblastic Lymphoma in a Boy With a Mediastinal Mass

A 7-year-old boy presented with enlarging cervical lymph nodes and progressive dyspnea for 2 weeks. A few days prior to presentation, he had completed a 1-week course of antibiotics for suspected bacterial cervical adenitis.

On physical examination, the boy was awake and conversant. Resting dyspnea without stridor or wheezing was noted. Large, nontender, immobile lymph nodes were palpable in the bilateral anterior cervical and inguinal regions. 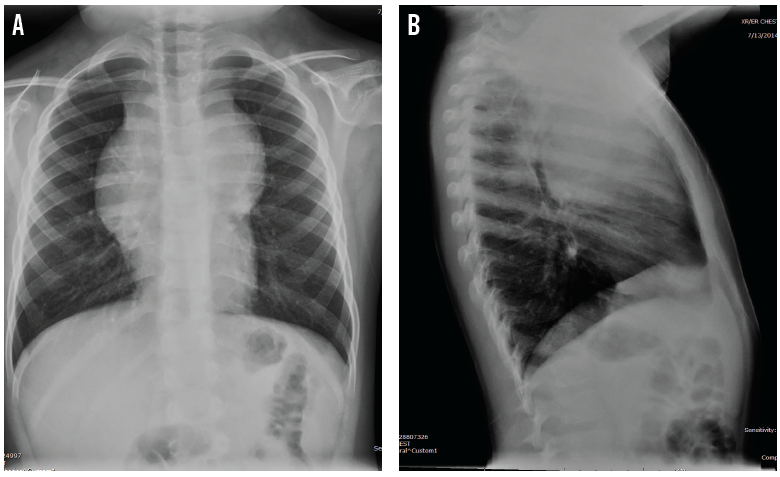 Lymph node biopsy was performed under general anesthesia. He remained intubated owing to a concern of worsening airway compromise in the setting of a suspected rapidly growing hematologic malignancy.

On postoperative day 2, the patient acutely decompensated from increased airway impingement at the tracheal carina. Prone positioning led to improvement in oxygenation and ventilation. Histopathologic examination revealed the diagnosis of T-cell lymphoblastic lymphoma.

General anesthesia and procedural sedation in children with anterior mediastinal masses can result in serious respiratory complications due to decreased lung compliance, diminished functional residual capacity, loss of bronchial smooth-muscle tone, and loss of negative-pressure effects on the airway.1 Additionally, mass effect on the heart and great vessels may lead to impaired venous return, decreased cardiac output, and cardiovascular collapse.2 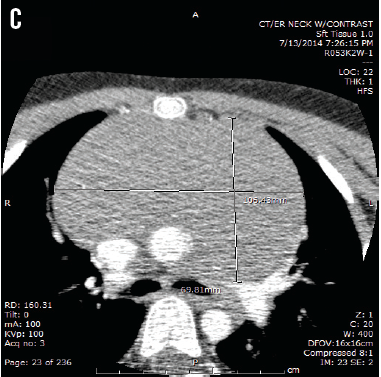 Biopsy under local anesthesia with maintenance of spontaneous ventilation and optimal positioning is preferred.1 When necessary, sedatives that maintain airway tone, such as dexmedetomidine3 and ketamine,4 should be considered. The size of the mass and the degree of tracheal compression aid in assessing the risk associated with anesthesia; however, the absence of concerning signs does not reliably exclude risk.5

In patients with significant cardiorespiratory compromise, prediagnostic treatment with corticosteroids6 or radiotherapy7 should be considered; however, histologic diagnosis, staging, and prognosis may be compromised.8 In all cases, careful preoperative planning by primary providers, anesthesiologists, oncologists, and surgeons is necessary. In patients with a high risk of complications, management in a center with extracorporeal membrane oxygenation capability should be considered.