A 3-week-old boy presented to our emergency department (ED) with a 1-day history of decreased urine output and oral intake. The boy was febrile, with a temperature of 39.5°C, though results of a physical examination were unremarkable. After a blood culture was drawn, the child’s mother left against medical advice. The next day, he was seen at an outside ED and was febrile. Blood cultures were again drawn, antibiotics were initiated, and he was transferred to our neonatal intensive care unit (NICU). Of note, the boy was born at 36 weeks gestation and mother’s prenatal history and laboratory results were unremarkable except for inadequately treated Group B streptococcus.

Blood cultures from both ED visits also returned positive for oxacillin-sensitive S hominis. Initial antibiotics were changed to oxacillin and cefotaxime to provide additional coverage for presumptive gram-negative bacteria. Two weeks into the NICU course, magnetic resonance imaging (MRI) was obtained due to the development of recurrent fevers despite targeted antibiotics. The imaging results showed microabscesses along the internal capsule and periventricular regions (Figure). By the end of 6 weeks of treatment, a repeat MRI showed significant improvement. At 9 weeks of age, the boy was discharged with unremarkable physical examination results and negative immunodeficiency studies. 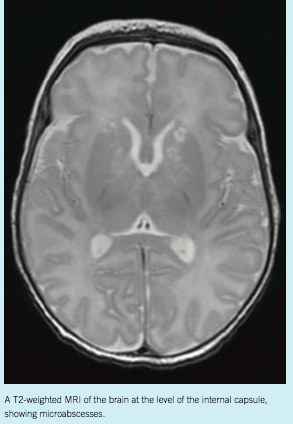 Coagulase-negative staphylococci (CoNS) are found in normal skin flora and mucous membranes of humans and animals. CoNS infections typically occur in immunocompromised patients, particularly those with indwelling devices such as intravascular catheters.1 Neonates are vulnerable to these organisms due to both the high rate of invasive procedures they undergo and the ability of the bacteria to form biofilms.2  CoNS are responsible for one-third of nosocomial infections in NICUs in the United States.3 They are the most common microorganisms causing infections associated with health care in NICU neonates.4

It is challenging to differentiate CoNS bacteremia from contamination, especially without indwelling devices. We believe our patient had clinically significant bacteremia with meningitis because he was symptomatic, had positive blood cultures before antibiotics, and had a positive CSF culture with microabscesses on MRI. After treatment, repeat blood cultures were negative, and repeat MRI showed significant improvement, which supports that this was a true infection. To the best of our knowledge, this is the first case of brain microabscesses caused by CoNS in a neonate without indwelling devices. Thus, it is important to consider CoNS as a potential pathogen in a septic newborn without indwelling lines or invasive procedures.

Alexis Phillips, DO, is a third-year pediatric resident in the Department of Pediatrics at Children’s Hospital of Michigan in Detroit.

Nischala Rajegowda, MD, and Beena Sood, MD, are with the Department of Pediatrics in the division of Neonatal and Perinatal Medicine at Children’s Hospital of Michigan and Hutzel Womens Hospital in Detroit.