Subungual Osteochondroma of the Third Toe

An 11-year-old boy presented to his pediatrician for “wart removal” from the third toe. He had had cryotherapy of this lesion on two occasions approximately 5 months earlier while living in another state. The lesion had continued to grow, and the boy complained of pain when pressure was applied to the site, particularly from footwear. There had been no bleeding from the lesion, but recently the nail of the third toe had become slightly displaced. He had no memory of trauma to the toe or left foot. His past medical history was notable for narcolepsy, which was being treated with modafinil, and sagittal craniosynostosis in infancy, which had required 2 surgeries. 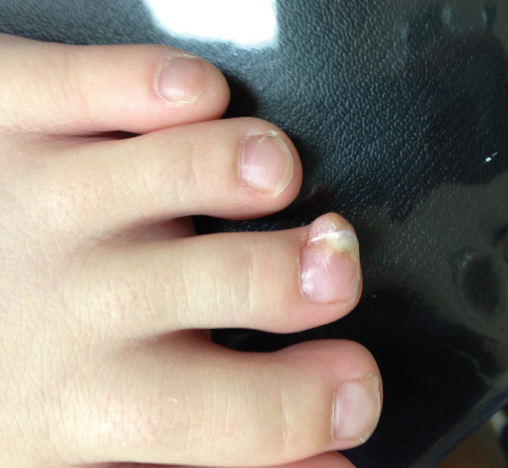 On physical examination, his vital signs were normal, his weight was 46.4 kg (87th percentile), and his height was 146.6 cm (66th percentile). The first, second, fourth, and fifth toes of the left foot were normal. The third left toe, however, had a pale, pink, hard nodule projecting from the lateral aspect of the distal phalanx, along with upward displacement of the adjacent toenail margin. The lesion was 7 mm in diameter and 5 mm in height. The patient reported tenderness on palpation. There was no surrounding skin erythema, although some tiny superficial capillaries were noted around the base of the lesion. He had normal movement of this toe and the left foot, and his gait was normal. No other skin abnormalities were noted.

Based on these findings, the boy received a tentative diagnosis of subungual osteochondroma of the third toe. The pathology report eventually confirmed the diagnosis. 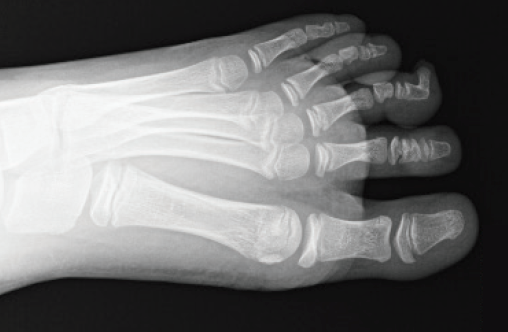 Osteochondromas are the most common benign bone tumors. They consist of cortical and medullary growth in direct extension from the underlying bony matrix, covered by a hyaline cartilage cap. The tumor can range from 1 to 10 cm in size and typically is solitary.1 Children and adolescents are disproportionately affected, with the most frequent location being the long bones of the lower extremity. About 40% of osteochondromas are located in proximity to the knee.1 Most osteochondromas are asymptomatic, although symptoms can occur if there is an associated fracture, vascular involvement, neurologic sequelae, bursa formation, or malignant transformation.

Subungual osteochondromas, in contrast, represent a rare tumor location and usually are symptomatic, with more than 90% causing pain in one series.2 The classic presentation is a firm nodule in the distal phalanx that is tender on palpation; adjacent nail deformity might also be present. As many as 90% of subungual osteochondromas occur on the toes, with hallux involvement in 80% of cases.1

The differential diagnosis includes subungual exostosis, squamous cell carcinoma, subungual fibroma, or another bony tumor. At least one other case report has noted a subungual osteochondroma that presented initially as verruca vulgaris; coincidentally, this patient’s osteochondroma also was located on the left third toe.3