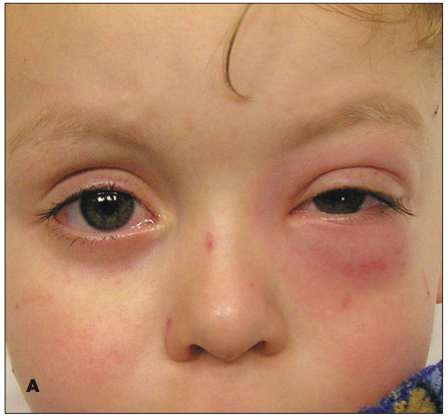 A 3-year-old boy was brought to the emergency department with left eye swelling, which had doubled in size since it appeared the day before, and purulent crusting (A). On the first day of the swelling, the child was evaluated at another facility and given the diagnosis of periorbital contusion, conjunctivitis, and left otitis media for which erythromycin ophthalmic ointment and oral cefuroxime were prescribed.

On admission, the child was afebrile. Treatment with intravenous nafcillin and ceftriaxone was started. Over the next 24 hours, the swelling and redness around the eye increased. There was slight proptosis and some limitation of all ranges of eye movement. 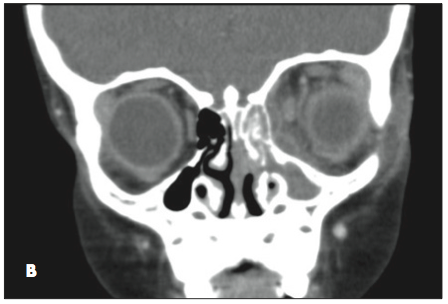 Historically, subperiosteal orbital abscesses have been treated with surgical drainage either via external approaches or endoscopically. However the majority of small subperisoteal abscesses can be treated medically with close follow-up.3,4

After surgical and infectious disease consultation, this child was treated with clindamycin and ceftriaxone (100 mg/kg/d IV). Over the next 3 days, the edema greatly decreased and extraocular movement returned to normal. At follow-up with his primary care physician 3 days after discharge, examination findings were normal. He completed 10 full days of antibiotic therapy with oral clindamycin and cefdinir.