Subcutaneous Fat Necrosis of the Newborn

An 11-day-old girl presented for a newborn checkup. She had been born to a 20-year-old primigravida mother via cesarean delivery at 37 weeks of gestation secondary to nonreassuring fetal status.

Maternal history was significant for a liver transplant 9 years prior to delivery. Maternal medications during pregnancy included prenatal vitamins, glyburide, prednisone, and cyclosporine. Standard maternal laboratory test results were normal, except for the detection of group B streptococcal (GBS) colonization, which had not been adequately treated at delivery. 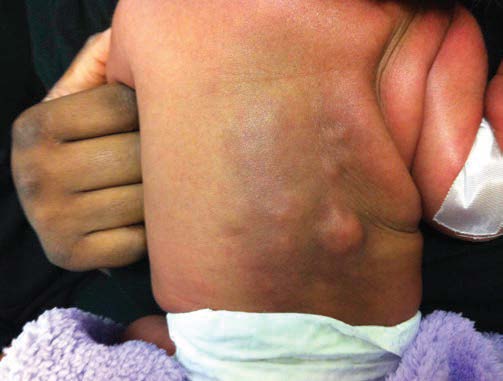 At delivery, the amniotic fluid was characterized as thick meconium. The patient was limp and did not cry. She required aggressive suctioning with a meconium aspirator followed by positive-pressure ventilation before crying spontaneously.

Her Apgar score was 4 at 1 minute, 6 at 5 minutes, and 8 at 10 minutes. After suctioning, she was intubated and transferred to the neonatal intensive care unit. There she was placed on ventilatory support for a short time, with rapid transition to a high-flow nasal cannula and then to room air within 24 hours. Given the maternal GBS colonization and the patient’s respiratory distress at birth, the neonate underwent a complete evaluation for sepsis.

Chest radiographs were unremarkable. Cerebrospinal fluid (CSF) analysis showed the presence of 4 red blood cells and 8 nucleated cells (8% lymphocytes, 92% monocytes, and no neutrophils), glucose level of 29 mg/dL, and protein level of 102 mg/dL. Results of a complete blood count included a white blood cell count of 22,900/µL (60% neutrophils, 32% lymphocytes, 7% monocytes, and 1% eosinophils), hemoglobin concentration of 16.8 g/dL, hematocrit of 50.9%, and a platelet count of 223 × 103/µL.

Her C-reactive protein (CRP) level was 53.9 mg/L at 24 hours of life. Her initial blood glucose level was 33 mg/dL; she received one bolus of dextrose 10% in water and remained normoglycemic thereafter.

Initial laboratory test results for electrolytes were normal, with a serum calcium level of 8.9 mg/dL. Placental histopathology demonstrated evidence of the early stages of acute chorioamnionitis. The newborn was treated with broad-spectrum antibiotics.

Final blood culture and CSF culture results were negative, and at 1 week of life, her CRP level had decreased to 11.5 mg/L. She was discharged home on day 10 of life and was tolerating oral feedings well, with a weight gain of 240 g.

On physical examination at the newborn checkup, her vital signs were normal. Her weight was 3,910 g (82nd percentile), length was 51 cm (49th percentile), and head circumference was 36 cm (84th percentile). A large (approximately 8 × 10 cm), lobulated, blotchy subcutaneous lesion was noted over her back. This area was rubbery in consistency and was nontender. The overlying skin was intact and mildly erythematous, and it blanched with pressure. The rest of the physical examination findings were normal.

Ultrasonography of the area showed a very ill-defined, smooth, lobulated, hyperechoic mass. The diameter of the lobulations ranged from approximately 1.3 cm to 0.6 cm and demonstrated an echotexture similar to that of the adjacent subcutaneous fat. Color Doppler ultrasonography examination did not demonstrate any flow within the mass.

(Diagnosis and discussion on next page)

Physical examination findings and imaging results were consistent with a diagnosis of subcutaneous fat necrosis (SFN) of the newborn. The patient’s mother was given appropriate guidance and education, and the patient was sent home with follow-up appointments for subsequent well-baby visits.

SFN of the newborn is a self-limited inflammatory disorder of adipose tissue. It is a relatively rare condition that usually affects term and postterm infants born with difficulty such as meconium aspiration, hypoglycemia, asphyxia, sepsis, hypothermia, macrosomia, and trauma.1-3 In fact, it has been noted as a rare complication of hypothermia treatment for birth asphyxia.4 Maternal risk factors for SFN of the newborn include gestational diabetes, chorioamnionitis, preeclampsia, smoking, thrombosis, and dyslipidemia.2,3

SFN initially presents as edema and erythema that develops into firm nodules over bony prominences, often on the back, arms, buttocks, thighs, and cheeks.1,5 The anterior trunk is not typically involved. It has a variable time to presentation and of duration, but it usually develops within 1 to 2 weeks of birth and lasts up to 6 months.

The etiology is not completely clear but likely is related to birth trauma leading to local inflammation, hypoxia, and/or hypothermia.5 Histologic examination of SFN lesions shows panniculitis with necrosis of adipocytes and inflammatory infiltrate. Adipocytes demonstrate needle-shaped clefts in a radial-type arrangement. Multinucleated giant cells and histiocytes, as well as areas of calcification, often are present.1,2,4

Rare complications of SFN can include thrombocytopenia, hypertriglyceridemia, hypoglycemia, anemia, and hypercalcemia. As such, SFN has been described as a visual marker for possible metabolic and hematologic disturbances.2 Thrombocytopenia typically develops just before the appearance of physical findings and is thought to be caused by sequestration of platelets within the subcutaneous tissue.

Interestingly, there are no reported bleeding problems in connection with SFN and thrombocytopenia. Hypertriglyceridemia also usually occurs before the development of typical lesions and may be caused by mobilization of fatty acids from necrotic adipocytes.

Hypercalcemia is the most commonly reported and the most worrisome complication of SFN, and it typically develops as the lesions begin to resolve. Reported complications from hypercalcemia secondary to SFN include lethargy, failure to thrive, vomiting, diarrhea, polyuria, polydipsia, dehydration, seizures, cardiac disturbances, and death.5

The cause of hypercalcemia with SFN has not been completely elucidated, although the most widely accepted theory is that macrophages contained within these nodular lesions produce 1,25-dihydroxyvitamin D, leading to increased intestinal absorption of calcium.1,6 Hypercalcemia secondary to SFN is treated with loop diuretics, corticosteroids, hydration, and infant formulas containing low levels of vitamin D and calcium. Secondary therapies such as calcitonin, citrate, and bisphosphonates have been used occasionally.2,3

The main differential diagnosis for SFN is sclerema neonatorum, a rare condition that presents as a rapidly spreading, diffuse hardening of skin and adipose tissue, leading to complications with feeding and breathing.1,6 The appearance of indurated skin is symmetric, and it typically starts on the legs and/or buttocks.6 Sclerema neonatorum most frequently is seen in ill preterm infants, often secondary to sepsis, congenital heart disease, or dehydration, and the condition has a poor prognosis. On histopathology examination, sclerema neonatorum shows thickened connective tissue around fat lobules and sparse inflammatory infiltrate.4,6