A 69-year-old woman with hyperlipidemia and chronic obstructive pulmonary disease presented to the emergency department with progressive, episodic dizziness. Episodes had occurred up to 10 times daily and had lasted from a few minutes to approximately an hour. She described this sensation as “the room spinning,” occasionally associated with nausea. She denied cardiac symptoms, focal weakness, changes in vision or hearing, otalgia, tinnitus, or ataxia. She had a 50 pack-year history of cigarette smoking and denied current or prior alcohol. Her medications included low-dose aspirin and lovastatin.

Physical examination. The woman was alert, oriented, afebrile, and nonobese. Her pulse rate was 78 beats/min. She had a blood pressure of 140/60 mm Hg in the right arm and 86/61 mm Hg in the left arm. The left radial pulse was notably weaker than the right. Findings of heart, lung, and ear, nose, and throat examinations were unremarkable. She had no carotid bruits. Neurologic findings, including results of cranial nerve, reflex, sensation, strength, and gait evaluations, were nonfocal.

The findings were concerning for subclavian steal with vertebrobasilar insufficiency, so cerebral magnetic resonance angiography (MRA) were performed, the findings of which were normal. Cervical MRA revealed patent carotid arteries but showed reversal of flow within the left vertebral artery associated with high-grade stenosis of the proximal left subclavian artery (Figures 1 and 2). 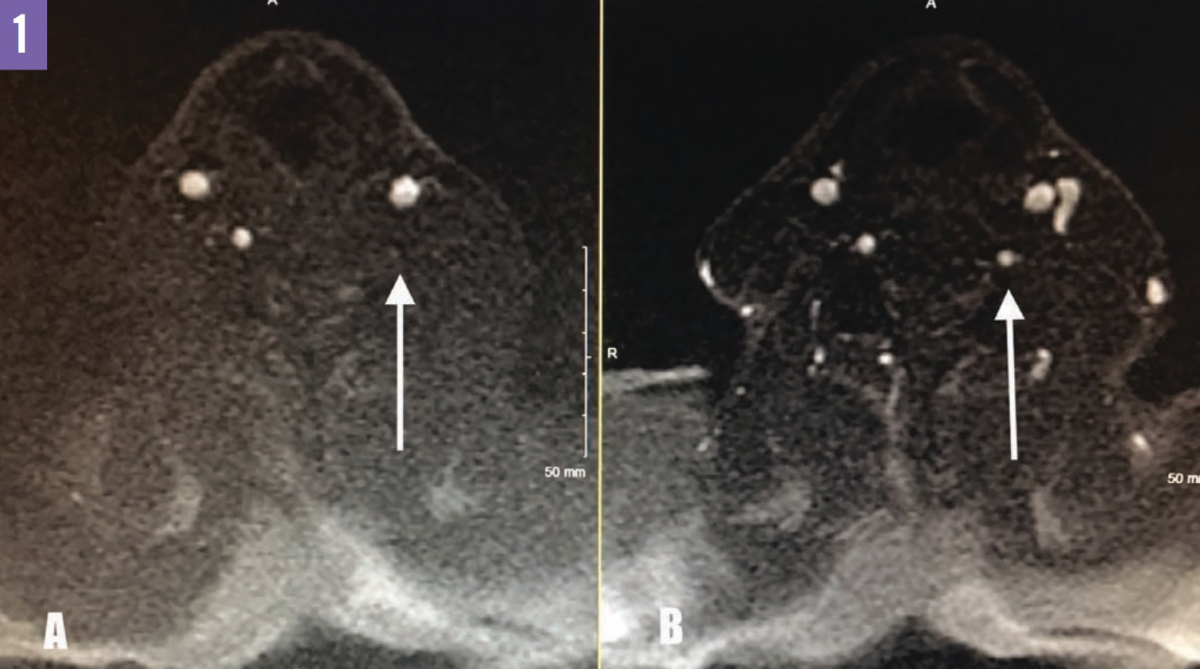 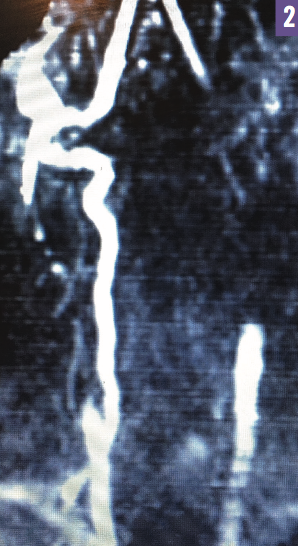 Balloon angioplasty and stenting of the left subclavian artery were performed, resulting in no residual stenosis and returning normal anterograde flow to the left vertebral artery. After the procedure, the patient’s dizziness ceased, and objective findings, including the blood pressure disparity between arms, also resolved.

Discussion. Dizziness is a symptom that often presents a diagnostic and treatment quandary. The differential diagnosis is broad, and in many cases, the underlying etiology remains unclear. Our patient’s dizziness was a result of subclavian steal syndrome (SSS) due to stenosis of the subclavian artery. Although it is an unexpected and uncommon cause of dizziness, treatment of symptomatic SSS that is amenable to vascular intervention may lead to complete resolution of symptoms.

Atherosclerosis is the most common cause of SSS, accounting for 95% of cases.1 In 80% of cases, the left subclavian artery is affected, likely due to its more acute angle of origin with more turbulent flow and to the greater atherogenic potential.2,3 Other causes of SSS include Takayasu arteritis, thromboembolic disease, congenital anatomic abnormalities, trauma, vascular changes from radiation therapy, dissecting aneurysms, and fibromuscular dysplasia.

Risk factors for SSS are those typically associated with atherosclerotic disease: hypertension, hyperlipidemia, diabetes, and smoking. Men are affected twice as frequently as women, and the average age at diagnosis is 55 years.1 The true prevalence is unknown, because many patients with reversal of flow are asymptomatic. Most studies have indicated a prevalence of between 0.6% and 6%, but the condition may occur in as many as 18% of patients with known peripheral arterial disease.4

SSS can be divided into 2 categories: cases caused by decreased blood flow to the upper extremity, leading to arm claudication manifesting as pain, fatigability, skin discoloration, and/or digital necrosis; and cases caused by steal from the posterior circulation, with vertebrobasilar insufficiency manifesting as lightheadedness, vertigo, ataxia, decreased hearing, syncope, visual changes, and/or focal seizures. Symptoms can be provoked or aggravated by exercise of the ipsilateral upper extremity. Nevertheless, most cases of SSS are discovered incidentally and remain asymptomatic due to the generous collateral circulation in the head, neck, and shoulder girdle.5

On physical examination, a systolic blood pressure differential of greater than 20 mm Hg can exist between arms.4 Many patients are asymptomatic, but as the blood pressure differential increases, the likelihood of symptomatic disease increases.3 Other findings include decreased ipsilateral upper extremity pulses, cervical or supraclavicular bruits, and disappearance of the radial pulse when the affected extremity is exercised.

Color-flow duplex ultrasonography of the carotid arteries is the radiologic diagnostic modality of choice, since it can help detect reversal of flow in the ipsilateral vertebral artery. Alternative studies include MRA or computed tomography angiography.