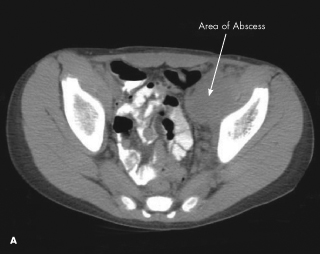 For the past 10 days, an 11-year-old boy had pain in the left side of the back and groin, with maximum severity (10/10), and difficulty in ambulation. He also had intermittent fevers (maximum temperature, 39.5ºC [103.1ºF]), chills, night sweats, and associated dysuria. He denied acute injury, nausea, vomiting, and abdominal pain. Seven days earlier, he was evaluated for similar, less severe symptoms. A radiograph of the hip and scrotal ultrasound imaging with Doppler study at that time were normal, and he was discharged home with a diagnosis of acute hip strain.

On examination, the boy was in moderate distress and afebrile, with a blood pressure of 100/72 mm Hg, heart rate of 96 beats per minute, and respiration rate of 20 breaths per minute. He sat with his left hip flexed and externally rotated. There was no leg length discrepancy; dorsalis pedis pulses were symmetrical and well palpable. He had tenderness to palpation of the left lower abdominal quadrant, without rebound, and of the anterior thigh. Pain was also elicited with hip movement, particularly extension. The remaining physical findings were normal.

Laboratory results revealed a white blood cell count of 12,100/mL, with a predominance of neutrophils; a C-reactive protein (CRP) level of 168.5 mg/L; and an erythrocyte sedimentation rate (ESR) of 94 mm/h. Results of a basic metabolic panel and urinalysis were normal. CT scans of the abdomen showed a mass with inflammatory changes in the left iliopsoas muscle (A and B). Empiric broad-spectrum antibiotic therapy with intravenous piperacillin/tazobactam was initiated along with narcotics for pain control. Surgery and orthopedic consultations were obtained, and the patient was admitted to the hospital.

An MRI scan of the pelvis revealed osteomyelitis of the left acetabulum with infectious and inflammatory changes along the course of the iliopsoas muscle tracking superiorly (C). An iliopsoas abscess within the left pelvic region was also identified. 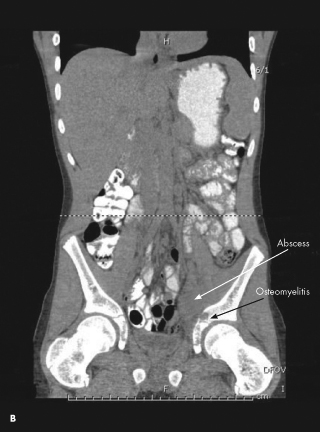 CT-guided drainage of the abscess under anesthesia was performed. Cultures of aspirated brownish pus grew Streptococcus milleri susceptible to clindamycin, vancomycin, penicillin, and cefotaxime. The patient was discharged home after 6 days with a prescription for oral amoxicillin, 1000 mg tid for 6 weeks. He completed this treatment and made a full recovery.

S milleri is a rare cause of psoas abscess.1,2 Staphylococcus aureus is the most common pathogen; Serratia marcescens and Pseudomonas have also been implicated. Primary psoas abscess is presumably a result of hematologic seeding.3 Secondary psoas abscess has a primary infectious source, most commonly intestinal disease. Up to 70% of cases are thought to be primary, with a male-to-female predominance of 3:1.4,5 Most affected patients are 30 years or younger.6,7

Diagnosis of psoas abscess is often delayed by an average of 7 to 40 days because of vague symptoms and a broad differential, which includes primary osteomyelitis of
the hip, toxic synovitis, septic arthritis, Perthes disease, and muscle strain or sprain. This patient had the classic triad of limping, back or flank pain radiating to the hip or thigh, and fever; however, this presentation is rare. Fever with or without rigors is the most common complaint with associated hip and abdominal pain. The pain is worse in supine position with the knee flexed and the hip externally rotated. Occasionally, flexion deformities may occur but often without a limp. In unusual cases, a palpable mass and swelling may be appreciated on examination. Nausea and weight loss have also been reported. 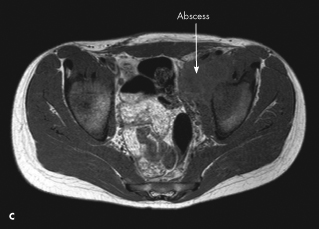 Radiographs and ultrasound imaging can identify psoas abscesses; however, CT and MRI have much greater sensitivity and specificity. The laboratory workup may reveal leukocytosis and an elevated ESR and CRP level. Mild hematuria may be present secondary to inflammation of the ureters.

Treatment consists of drainage and an extended course of antibiotics. The less invasive CT-guided aspiration with drainage is preferred to open surgical drainage. Empiric antibiotic therapy must cover S aureus until culture and sensitivity results are available.