Streptococcus anginosus Bacteremia and Pyomyositis in a Healthy Child

A 7-year-old boy presented with a 3-day history of swelling of the left gluteal region, fatigue, and high-grade fever. One day prior to admission, he also had developed difficulty walking. The boy’s mother mentioned having seen a small “bite mark” on the boy’s left buttock 3 days prior to admission that had resolved by the time he came to the hospital.

On physical examination, the boy was in distress due to pain and was unable to bear weight on his left leg. His temperature was 40°C, and his vital signs were otherwise stable. On physical examination, he was found to have a 12.5 × 8.5-cm erythematous induration at the left hip/gluteal region with significant tenderness. No obvious bite marks were observed, and findings from examinations of other systems were unremarkable.

An ultrasonogram of the hip showed edema around the hip joint but no effusion. Magnetic resonance imaging (MRI) revealed findings consistent with extensive myositis involving multiple left hip muscles, as well as pyomyositis with associated intramuscular abscesses involving the left gluteus maximus muscle (Figures 1 and 2). There was no evidence of septic arthritis or osteomyelitis. The patient was started on a regimen of intravenous clindamycin and vancomycin. 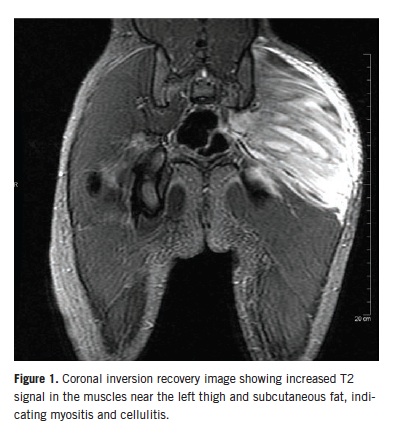 An orthopedic surgeon was consulted on day 1 of admission. Incision and drainage of the area was performed, and 60 mL of purulent fluid was drained and sent for culture tests. The boy continued to have a high-grade fever with no improvement in the swelling and tenderness of the left gluteal region. Wound debridement and irrigation was done on day 3 of admission. A negative-pressure wound therapy vacuum was placed, and cultures were sent for testing. He initially was continued on intravenous clindamycin and vancomycin, but as the wound culture from the second drainage began to grow Gram-negative bacilli, cefepime was added to the regimen.

The boy improved significantly after debridement, with resolution of fever and improvement of the pain and swelling. His first blood culture grew penicillin-sensitive Streptococcus anginosus, which responded to antibiotic treatment, with clearance of bacteremia on subsequent blood cultures.

His first wound culture grew 2 different groups of viridans group streptococci (VGS), and the second wound culture grew numerous organisms including Eikenella, Prevotella, and Peptostreptococcus in addition to VGS. The VGS species could not be further identified because of inadequate bacterial growth. The patient’s antibiotic regimen was changed to ceftriaxone and clindamycin in accordance with the sensitivity of the microorganisms.

The boy improved and was discharged to complete 6 weeks of intravenous clindamycin and ceftriaxone. At a follow-up visit at the infectious diseases clinic after having completed the antibiotic treatment, he showed resolution of all symptoms.

S anginosus belongs to the viridans group of streptococcus bacteria. VGS are Gram-positive, catalase-negative cocci appearing in chains on light microscopy. The organism is difficult to classify and generally is considered to be of low pathogenic potential. It is categorized into 5 subgroups on the basis of RNA gene sequencing (anginosus, mitis, salivarius, mutans, and bovis).1

The S anginosus group (SAG) is further divided into 3 subgroups: S anginosus, S intermedius, and S constellatus.2,3 SAG bacteria usually are harmless commensals that frequently are found in the oropharynx and the gastrointestinal and genitourinary tracts. They often cause various invasive pyogenic infections, including intra-abdominal abscess, lung abscess, and brain abscess, along with other superficial and deep infections.4 Moreover, co-infection of SAG bacteria with other bacteria, such as Eikenella corrodens and anaerobes, can cause rapid proliferation of streptococci, leading to more extensive disease.5,6 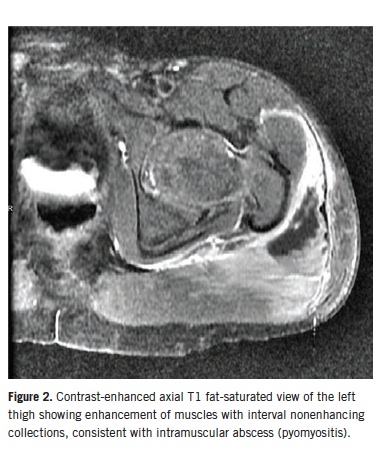 A PubMed search of the literature for pyomyositis caused by S anginosus yielded only one report of a 50-year-old patient with HIV who presented with fever, chills, right thigh pain, and no history of trauma.7 MRI of the right thigh showed extensive myonecrosis of the vastus lateralis and vastus medialis muscles, which required extensive surgical debridement. Blood cultures remained sterile, but wound cultures grew S anginosus. Brain MRI showed multiple ring-enhancing lesions. No other focus of infection was found, and the authors presumed that transient bacteremia led to seeding of infection to the right thigh muscles and possibly to the brain. The patient’s right thigh infection had completely healed after 2 weeks of intravenous ampicillin followed by 2 weeks of oral amoxicillin-clavulanate. However, residual right-sided lower-limb weakness developed due to the extent of muscle involvement and debridement. Subsequent brain MRI showed complete resolution of brain lesions.

Our patient had a history of a human bite on the left buttock a few days before admission. Wound culture results indicated bacteria originating in the oral cavity. The bite could have inoculated oral bacteria into the soft tissue, leading to cellulitis of the left thigh with resultant S anginosus bacteremia and subsequent pyomyositis.

S anginosus has a unique propensity for causing invasive pyogenic infections, especially in the presence of other microorganisms. Pyomyositis from S anginosus is exceedingly rare, with only a single report in an immunocompromised adult. Our patient’s case highlights the fact that infection with this organism also can lead to cellulitis and bacteremia with severe muscle infection in an immunocompetent pediatric patient.

Maheshwar Mahaseth, MD, is a resident in the Department of Pediatrics at Wayne State University School of Medicine, Children’s Hospital of Michigan, in Detroit.

5. Shinzato T, Saito A. A mechanism of pathogenicity of “Streptococcus milleri group” in pulmonary infection: synergy with an anaerobe. J Med Microbiol. 1994;40(2):118-123.