A 3-year-old girl who had a recent immunization presented to the emergency department (ED) with a 2-day history of worsening rashes of the body with peeling of the skin, mouth sores, bilateral conjunctivitis, and concomitant fever to 38.3°C. Rashes, which were blistering and filled with clear fluid, began on her abdomen and spread over her body. There was no history of recent travel, contact with sick individuals, or antibiotic use prior to the onset of symptoms.

The girl was seen in the ED 2 days previously for the same rashes and received a diagnosis of an allergic reaction to the vaccine, which was administered 2 days prior to the onset of symptoms. In addition, she had an ongoing productive cough for 5 days. Results of chest radiography were unremarkable.

The patient appeared well hydrated with some distress due to the painful rashes. Vital signs were notable for a temperature of 38°C. She was in no respiratory distress. A productive cough was noted, and erythematous patches were observed on the face bilaterally. Her eyes were notable for scleral injection and nonpurulent lacrimation. The oral mucosa appeared swollen and erythematous with sores and drooling (Figure 1). The skin of her arms, abdomen, and back showed erythematous macules with target appearance (Figure 2). There was peeling of the rash noted on the left arm (Figures 3 and 4). The genitalia showed erythematous eruptions with no vaginal discharge.

The patient was started on intravenous (IV) fluids as tolerated pending transfer to the intensive care unit (ICU) at another hospital for wound management. A subsequent blood test for Mycoplasma pneumoniae cold agglutinins was positive. The girl received a diagnosis of Stevens-Johnson syndrome (SJS) associated with M pneumoniae.

SJS and TEN very rarely occur without any medication use. In fact, medications are the leading trigger of SJS in both children and adults. However, the drug history may only reveal a long-term medication use, which cannot be considered to be the cause of the adverse reaction.2

The most commonly implicated medications in children who develop SJS include sulfonamide antimicrobials, phenobarbital, carbamazepine, and lamotrigine. There has also been some association between acetaminophen use in children and SJS.1

M pneumoniae is the most common infectious agent associated with SJS in children. Oftentimes M pneumoniae-associated SJS cases are distinct in that they are more likely to have absent-to-sparse skin involvement with moderate-to-severe involvement of 2 or more mucosal sites. However, it is uncertain whether this presentation represents an atypical SJS variant or is a distinct entity.1 Vaccinations, systemic diseases, contrast medium, external chemical exposure, herbal medicines, and foods have been associated with SJS, but these are rare associations.

Although the pathogenesis is not fully understood, recent studies showed that SJS might be the result of cell-mediated immune response to antigenic stimulus activating the cytotoxic T cells. This results in apoptosis of the keratinocytes.3

Influenza-like symptoms and fever tend to precede the development of mucocutaneous lesions by 1 to 3 days. Conjunctivitis with itching or burning, and photophobia, may be the early symptoms of mucosal involvement. Most patients experience myalgia, malaise, and arthralgia.1

The skin findings tend to begin with exanthematous eruptions that are ill-defined. The lesions start on the face and thorax before spreading to other areas of the body symmetrically. Later, vesicles and bullae form, and the skin begins to slough. Touching the skin often elicits pain out of proportion to the cutaneous findings.1

Currently, there are no universally accepted diagnostic criteria for SJS. The diagnosis is often based on clinical history. The diagnosis of SJS would be appropriate in a patient with the following clinical features: history of drug exposure prior to symptoms; a prodrome of acute febrile illness with malaise; erythematous macules or target lesions progressing to vesicles and bullae; painful oral, ocular, and/or genital lesions; and necrosis or sloughing of the epidermis.1 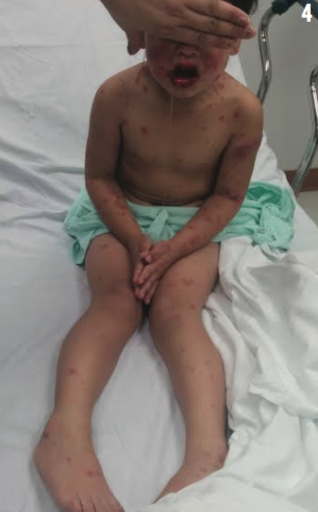 Management of the disease involves treatment of the symptoms. If a drug is suspected to be the offending agent it should be withdrawn immediately. Supportive care is the mainstay of treatment and includes wound care, fluid and electrolytes, nutritional support, temperature management, pain control, and monitoring/treatment of superinfections. Depending on the degree of skin involvement and necrosis, patients may need to be managed in the burn unit.

Transfer to the ICU is recommended in hemodynamically unstable patients. Specialized care is critical for affected mucosal surfaces, as overlooked mucosal lesions can lead to lifelong problems. If the eyes are involved, ophthalmologic consultation is essential. Daily eyelid care with anti-inflammatory eye drops several times a day is recommended.2 Early gynecologic examination should be performed in all female patients with SJS to prevent/decrease the formation of adhesions, labial agglutination, and vaginal adenosis.5

The use of systemic corticosteroids has been controversial, but recent studies suggest that a short course of moderate-to-high dose of systemic corticosteroids for 3 to 5 days may be beneficial if given within 24 to 48 hours of symptom onset. IV immune globulin was initially proposed based on the hypothesis that Fas ligand was the main mediator of the keratinocyte apoptosis. It is now widely accepted that granulysin, a cytotoxic protein found in cytotoxic T cells, is the predominant mediator.5

Patients should be advised to avoid all contact with the drug that was thought to be the cause of the SJS reaction.5