An 18-year-old gravida 1, para 1 woman presented 3 months after delivery with worsening dull headaches that had started at the end of her third trimester.

History. Initially, she had experienced some nausea and few episodes of vomiting associated with the headaches. After delivery, she began to have intermittent horizontal diplopia and visual changes that she described as flashes. Additionally, she noted the onset of dizziness, face numbness, and intermittent ataxia a few weeks prior to presentation. She had no family history of von Hippel-Lindau (VHL) disease.

Physical examination. The patient’s left eye was unable to fully deviate laterally, with worsening diplopia on left lateral end gaze. These findings were consistent with left sixth cranial nerve palsy. The rest of the neurologic examination findings were otherwise intact. 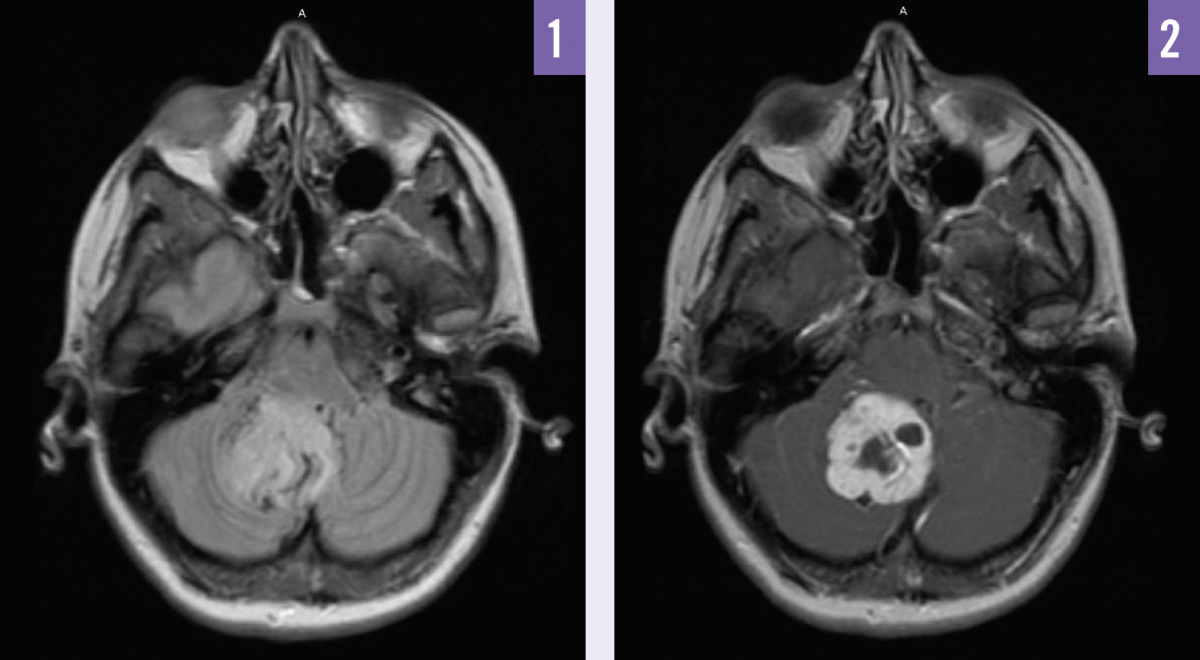 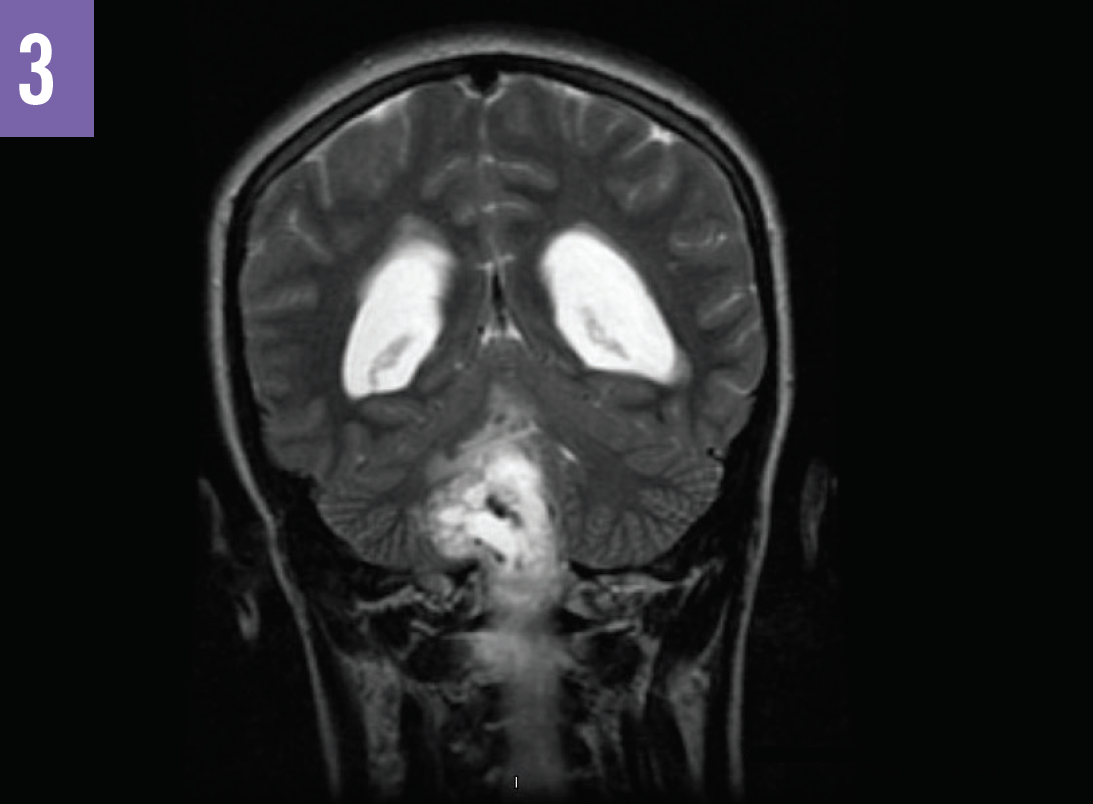 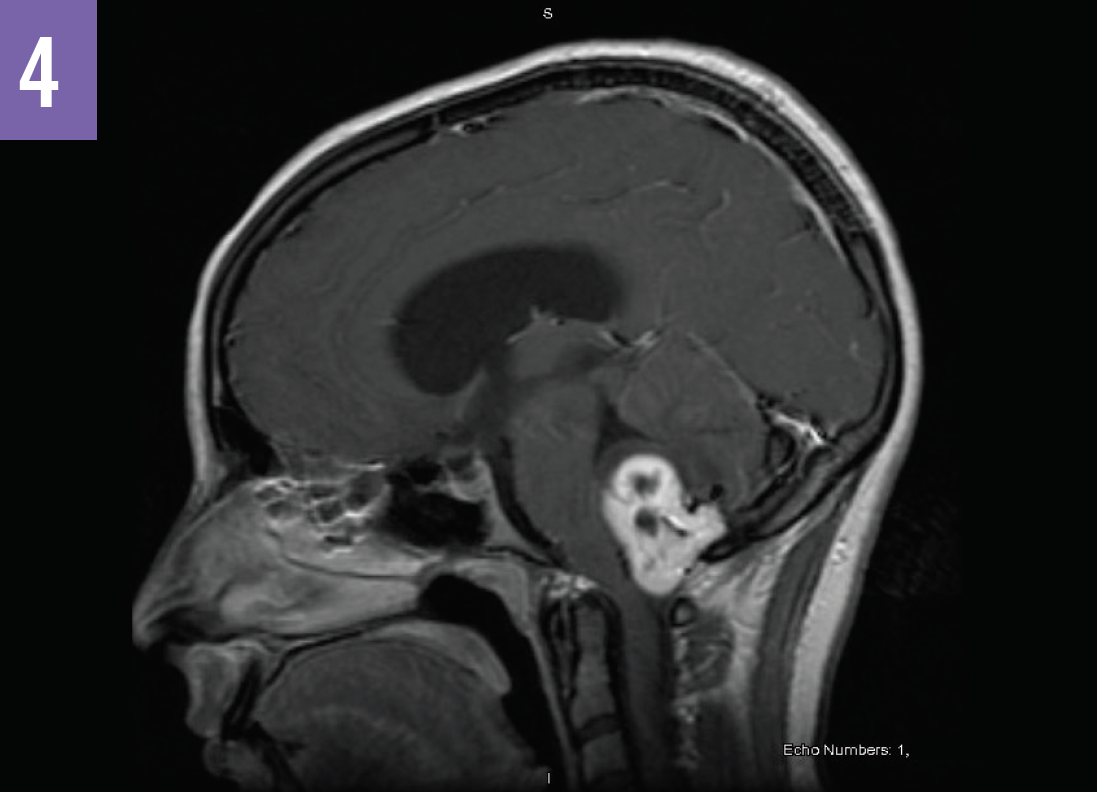 During the subsequent hospital admission, chest, abdominal, and pelvic computed tomography scans ruled out metastasis or any other extracranial manifestation associated with the tumor. The patient had a 6-vessel angiogram that showed a highly vascular tumor with the blood supply arising exclusively from the posterior inferior cerebellar artery.

The patient received a diagnosis of sporadic cerebellar hemangioblastoma.

Treatment. Considering the highly vascular nature of the tumor as evidenced in the angiogram, a decision was made to perform a presurgical transarterial tumor embolization via the posterior inferior cerebellar artery using ethylene vinyl alcohol copolymer embolization, which was successful and reduced the tumor blood supply by 80%.

After the embolization, the patient underwent surgical resection of the tumor, with a ventriculostomy placement to reduce the elevated intracranial pressure.

Outcome of the case. The patient tolerated the procedure well. She did have moderate cerebrospinal fluid drainage from the ventriculostomy initially, but the output decreased gradually to minimal levels, allowing discontinuation of the ventriculostomy before discharge. The patient was then discharged home, and she remains in good health to date, with resolution of the sixth cranial nerve palsy. Genetic test results for VHL were negative.

VHL disease is an autosomal dominantly inherited cancer syndrome with a penetrance of more than 90%.7,8 It manifests with CNS hemangioblastomas, retinal angiomas, renal cell carcinomas, pancreatic or hepatic cysts, pheochromocytomas, and papillary cystadenomas of the epididymis or broad ligament.6,8 We present a case of a symptomatic solitary sporadic cerebellar hemangioblastoma in a postpartum woman; very few cases of sporadic hemangioblastoma in pregnancy or in postpartum patients have been reported in the literature.

Headache is one of the most common complaints in primary care and affects approximately 50% of the general adult population at any given time.9 Primary care providers must recognize the characteristics of the different headache types. It is critically important to identify warning signs that may suggest underlying causes of headache requiring further investigation. Some of these warning signs are headaches aggravated or relieved by assuming an upright or supine position; intracranial hemorrhage; headaches provoked by a Valsalva maneuver; sudden onset of headache; onset of headache after 50 years of age; papilledema; the presence of focal or lateralizing neurologic signs; and recent pregnancy.9 In our patient’s case, sixth cranial nerve palsy was a red flag; in fact, retrospective studies show that up to 39% of sixth nerve palsies are associated with neoplasms.10

Evidence from other case reports suggests that during pregnancy, these tumors tend to undergo rapid expansion, with acute worsening of the symptoms.1 This progression should be taken into account when managing pregnant patients, and frequent monitoring may be warranted. Considering that 30% of all cases of hemangioblastoma are associated with VHL disease, screening for it is recommended.6,7

Due to the autosomal dominant nature of VHL disease, the patient’s relatives should be screened to detect the manifestations at an early stage and prevent complications.11,12 The diagnosis is established through genetic testing, the sensitivity and the specificity of which are nearly 100%.8