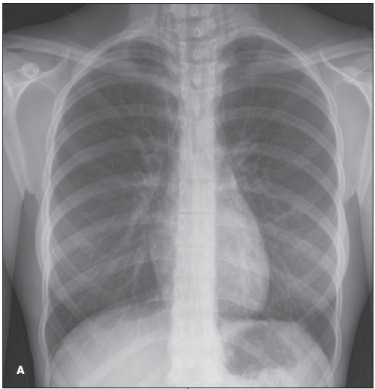 A 16-year-old girl presented to the emergency department with substernal chest pain exacerbated by deep inspiration, throat pain, difficulty in swallowing, and pain when turning her head to the side. She had no shortness of breath. The pain began suddenly the day before without any clear precipitating event. She denied similar symptoms in the past. She had no history of asthma, recent respiratory illnesses, cough, trauma, air travel, scuba diving, playing wind instruments, or use of drugs. She played volleyball and ran daily.

On examination, the calm, polite patient was at the 15th percentile for weight and 80th percentile for height. Respiration rate was 18 breaths per minute, with 100% oxygen saturation on room air. The trachea was midline, with bilateral anterior neck crepitus. Lungs were clear to auscultation, without respiratory distress. Heart rate and rhythm were regular, with no abnormal sounds.

A chest radiograph revealed linear streaks of lucencies, representing free air in the mediastinum and in the neck soft tissue (A). There is also gas outlining the superior surface of the diaphragm and separating it from the heart, known as the continuous diaphragm sign.

A chest CT scan showed air around the mediastinal structures, consistent with pneumomediastinum (B). A neck CT scan showed superficial and deep subcutaneous emphysema (C). The patient was treated with supplemental oxygen via a simple nasal cannula for comfort. Her symptoms gradually resolved, and she was discharged from the hospital the following day. She was advised to avoid strenuous activities over the next few weeks.

Spontaneous pneumomediastinum, unlike secondary pneumomediastinum, is not associated with a precipitating event, such as blunt or penetrating trauma, surgical procedures, mechanical ventilation, or underlying lung disease. The generally accepted pathophysiology of the condition involves a sudden increase in intrathoracic pressure that results in increased intraalveolar pressure. This leads to free air escaping from ruptured alveoli and tracking along peribronchial vascular sheaths toward the lung hilum and into the mediastinum. Air can then move into the neck, retropharyngeal space, submandibular space, pericardium, or even into the abdomen.1-3

Spontaneous pneumomediastinum was first described as a complication of childbirth in 1617 by Louise Bourgeous, the midwife to the Queen of France.2,3 The prevalence of spontaneous pneumomediastinum in children has been reported to range from 1 per 800 to 42,000 among those who present to emergency departments with chest pain or dyspnea.4,5 There is a bimodal distribution in age of incidence, with peaks in children younger than 7 years (who are thought to have had respiratory infections) and in adolescents.5

In pediatrics, the most common predisposing diagnosis is asthma, followed by respiratory infections and vomiting. Other precipitants include strenuous exercise, hyperpnea associated with diabetic ketoacidosis, valsalva maneuvers (ie, straining to stool, weight lifting, childbirth, blowing up balloons, shouting, playing wind instruments), and drug inhalation (commonly cocaine, marijuana, or ecstasy).3-6 It is estimated that one of these triggers for spontaneous pneumomediastinum can be found in 70% to 90% of cases.4,5 Although the reason is unknown, a tall, thin body habitus is thought to be a risk factor for spontaneous pneumothorax, and this has been generalized to spontaneous pneumomediastinum.6 Males are more commonly affected than females.7

The most frequently reported symptom is chest pain, characteristically described as stabbing, retrosternal, and worse with deep inspiration or leaning back. The pain may radiate to the back, shoulders, or arms. Other common symptoms are dyspnea, cough, and dysphagia.1-4,6,7 The triad of chest pain, dyspnea, and subcutaneous emphysema occurs in about 40% of cases.4

Cervical subcutaneous emphysema is the most common finding on examination.1,2,7 The classical Hamman sign—a mediastinal crunch or crepitation heard over the precordium during systole—is accentuated during expiration and in the left lateral decubitus position. It is almost pathognomonic for pneumomediastinum; however, it can be mistaken for the friction rub heard with pericarditis.1-5

It is also important to evaluate for signs of an asthma exacerbation or other underlying causes. Esophageal rupture should also be considered in patients with pneumomidiastinum after forceful vomiting. It can be associated with a left-sided pleural effusion on chest radiography and is diagnosed with a contrast esophagogram.1,3-5

The use of 100% oxygen as therapy for asymptomatic or minimally symptomatic patients remains controversial and is typically reserved for patients with symptoms that are not severe enough to necessitate surgical intervention.3-5

In general, spontaneous pneumomediastinum is a benign condition that resolves without complications in 3 to 15 days.4,5 Treatment is usually limited to analgesia, management of any identified underlying conditions, rest, and avoidance of valsalva maneuvers.2-5 Air travel is discouraged until the pneumomediastinum has resolved, and scuba diving is contraindicated.8,9 A follow-up radiograph should be obtained if the patient’s clinical status worsens or is unimproved.5 Any morbidity is usually linked to the underlying trigger. Spontaneous pneumomediastinum can be associated with pneumothorax and more rarely with tension pneumomediastinum.1,3,4 The rate of recurrence is reported to be 0% to 8%.7