An 8-year-old boy presented to the emergency department (ED) with a several day history of back pain and a 1-day history of bilateral arm pain. He rated his pain as being 10 of 10. He also complained of generalized weakness of the arms and legs, and he had difficulty with ambulation. 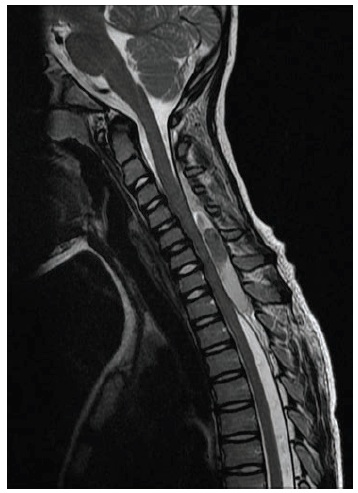 There was no history of trauma. He had no history of fevers, but he did have a mildly elevated temperature (38.0°C) in the ED at presentation.

On physical examination, the patient was in significant distress secondary to pain. He kept his neck in a flexed position. He had some tenderness to pain over the midline lower neck and upper back. He had no signs of trauma or deformity to the back, neck, or extremities. Generalized weakness was noted in the upper and lower extremities, with 4/5 strength at the biceps, triceps, grip, hip flexors, and dorsiflexion/plantar flexion. He had no tenderness to palpation anywhere in his extremities.

Magnetic resonance imaging revealed an epidural fluid collection extending from the third cervical vertebra to the third thoracic vertebra, suggesting the presence of an epidural hematoma or epidural abscess. The lack of significant fever or elevation of inflammatory markers made a hematoma more likely; nevertheless, there was no history of trauma.

The patient was taken to the operating room, where a cervical laminotomy with laminoplasty was performed. A large hematoma was evacuated. He required 2 more surgeries to evacuate reaccumulations of blood in the epidural space.

All evaluations for bleeding disorders or vascular anomalies of the epidural space have been negative to date. He has made a near-full recovery, although he still requires extensive physical therapy and occupational therapy.

Rapid decompression of the spinal cord is essential to the outcome of children with epidural hematomas. With early diagnosis and intervention, the outcome is guardedly favorable.3 In a 1993 Japanese review,4 nearly two-thirds of patients achieved a return to normal function, and one-fourth returned to near normal function.