A 5-year-old previously well boy was referred to the emergency department after a week of intermittent fever along with progressive left back and leg pain and refusal to bear weight. He reported that the pain had started in his left hip and over several days had proceeded to involve his left flank and lower back.

He had a loose stool on the day of presentation but otherwise had no emesis, abdominal pain, or changes in bowel or bladder habits.

On physical examination, the patient’s temperature was 38°C and his pulse rate was 99 beats/min. He was in obvious discomfort, refusing to bear weight. There was no skin change or swelling over the left leg or hip. He had full range of motion and strength in the extremity, with normal coordination, but he demonstrated pain on passive hip flexion and hyperextension. There was tenderness to palpation over the left paraspinal area at the L3-L4 level.

Laboratory studies revealed a white blood cell count of 17,200/µL, a platelet count of 581 × 103/µL, an erythrocyte sedimentation rate of of 115 mm/h, and a C-reactive protein level of 210 mg/L. Results of plain radiographs of the abdomen, hips, and lumbar spine were normal. Computed tomography scans of the abdomen and pelvis showed a mildly thickened psoas muscle without obvious abscess, a finding that was concerning for psoas muscle inflammation. 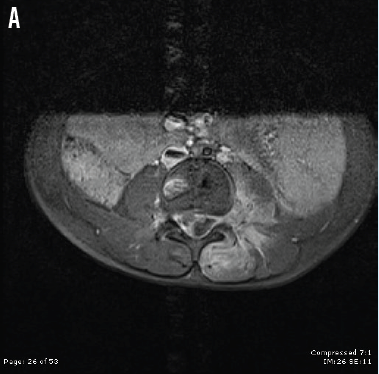 Magnetic resonance imaging (MRI) with and without contrast of the lumbar spine and pelvis, obtained to further evaluate the psoas, revealed a lumbosacral epidural abscess with inflammatory changes of the left psoas and left posterior paraspinous musculature (A and B). Also present was marrow signal abnormality at the involved levels of L5-S1, suggestive of osteomyelitis or reactive edema.

The patient was admitted and began empiric intravenous antibiotic therapy. A neurosurgeon was consulted, and an urgent L2-L3 through S1-S2 laminectomy with abscess evacuation was performed. Blood cultures were negative for pathogenic bacteria. Abscess cultures grew methicillin-sensitive Staphylococcus aureus. The patient eventually was discharged home with a peripherally inserted central catheter to receive a total of 6 weeks of cefazolin therapy.

Two months later, the boy’s condition had returned to baseline, and he was active with no restrictions. A follow-up MRI scan confirmed that there had been no epidural abscess recurrence. Ongoing signal intensity and enhancement involving the left-sided posterior elements of L5 and S1 were hypothesized to be reactive change resulting from the previous infection and subsequent laminectomy.

Epidural abscess is a rare cause of back pain in children that can have serious complications if not promptly recognized and treated. Epidural abscess most often results from the extension of infection from adjacent structures such as the psoas. It also can arise from the extension of osteomyelitis in a vertebral body or from direct inoculation during an epidural anesthetic procedure.1,2 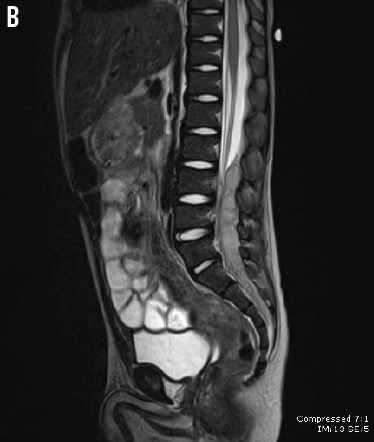 The psoas arises from the transverse processes of T12 through L5, inserting into the lesser trochanter of the femur to form the main flexor muscle of the hip. Consequently, identification of a psoas infection should prompt evaluation of the adjacent vertebral structures, epidural space, and hip. Patients with a psoas abscess frequently present with a positive psoas sign, where extension of the leg against resistance while lying on the unaffected side results in pain, indicating inflammation of the muscle.3

The prognosis depends on the timing of intervention and is more favorable if surgical drainage is performed within 24 hours of the development of neurologic symptoms.4