A mother brought in her 11-month-old daughter for evaluation of a mark on her left lateral eyebrow. The mark had been present since birth, and the mother had noted intermittent swelling of the eyelid occurring approximately once a month and forming what resembled a blister. The swelling typically lasted for several hours before resolving completely. When it did occur, the swelling usually was severe enough to result in almost complete closure of the left eye and subsequent loss of vision in it. The swelling did not appear to be painful or bothersome to the girl, and it did not appear to correlate with certain activities, foods, or exposures.

The girl was otherwise healthy, with normal development and growth. On review of systems, there were no other complaints other than occasional dry skin, for which the mother used an over-the-counter soap for sensitive skin. There was no family history of similar lesions. 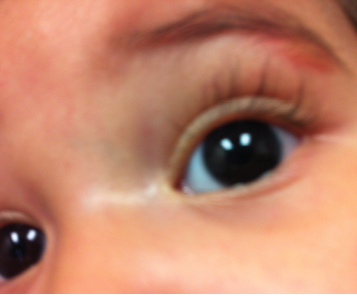 At presentation, the child was alert, interactive, and behaving appropriately for her age. Her growth was within normal limits. Physical examination findings were normal, with the exception of the skin lesion at the lateral aspect of her left eyebrow. The lesion was a solitary, relatively well-defined, light tan, mildly erythematous nodule (Figure 1). The nodule was round and had a diameter of approximately 1.5 cm. It was soft and was noted to enlarge slightly when stroked lightly (Figure 2). No similar lesions were observed elsewhere on her body. The lesion regressed slowly during the course of the visit.

Based on this presentation, the child received a diagnosis of a solitary mastocytoma with no systemic involvement.

Mastocytosis is a group of rare disorders characterized by an abnormal accumulation and growth of mast cells in in one or more organ systems. Mast cells are multifunctional hematopoietic cells that originate from bone marrow progenitor cells. Although they primarily are involved with allergic reactions and anaphylaxis, they also serve an immunoprotective role. Mature mast cells are concentrated in the skin around peripheral nerves and adjacent to blood and lymphatic vessels. When activated by immunoglobulin E or other stimuli, mast cells release preformed mediators of inflammation, leading to acute and delayed hypersensitivity reactions. The release of these mediators also results in the cutaneous and systemic manifestations of mastocytosis. For example, histamine release leads to vasodilation, erythema, edema, pruritus, and urticaria, as well as increased gastric acid production and intestinal cramping.1 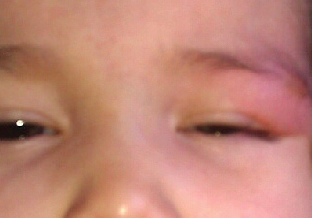 In childhood, mastocytosis invariably is cutaneous, and the systemic forms are rare. In contrast, mastocytosis cases in adults typically are systemic.4 However, in some pediatric cases and most adult cases, cutaneous lesions are the first sign of systemic disease.

Mastocytomas are relatively rare and present as solitary, flat, brownish red macules that urticate after rubbing. They appear at birth or in early infancy and usually resolve by adolescence or earlier. Mechanical irritation of lesions leads to a release of mast cell mediators and resultant reddening and urticarial swelling. This reaction is known as the Darier sign, and it is pathognomonic for all forms of cutaneous mastocytoma.5

Systemic mastocytosis can involve any organ system, even those in which mast cells normally do not accumulate, such as the spleen, the liver, the nervous system, the gastrointestinal tract, the heart, and the lymph nodes.

Since mast cells play a role in allergic reactions, the symptoms of mastocytosis often are similar to those of an allergic reaction correlating to the involved organ system. These symptoms can include fatigue, syncope, abdominal discomfort, nausea, vomiting, diarrhea, flushing, anaphylaxis, hypotension, myalgia, bone pain, headache, ocular discomfort, and gastrointestinal malabsorption.

Most mastocytosis cases have a good overall prognosis and are characterized by low mast cell burden, particularly at the early stages of the disease with limited or no systemic involvement. In most cases, only yearly checkups are necessary, and no treatment is required; preventive recommendations are warranted in individuals with systemic disease and constitutional symptoms.6

There is no cure for more severe forms of mastocytosis, but a number of pharmacologic treatments can minimize symptoms. These include antihistamines, leukotriene inhibitors, mast cell stabilizers, proton pump inhibitors, epinephrine, salbutamol, corticosteroids, and antidepressants.

The solitary cutaneous mastocytoma seen in our patient was a benign lesion, without evidence of systemic involvement on review of systems or physical examination. Because there was no evidence of multiple lesions, obtaining a serum tryptase level to establish the diagnosis was not indicated.

Most solitary cutaneous mastocytomas have a benign course, and approximately 90% of cases resolve by 7 years of age; thus, the patient’s mother was reassured as to the benign nature of the lesion and the high likelihood of spontaneous resolution.

The patient will be followed up closely to monitor for the development of additional lesions.

Cameron Rosenthal, MD, is a pediatric resident at the University of Florida College in Gainesville.

Maria Kelly, MD, is an associate professor of pediatrics at the University of Florida College of Medicine in Gainesville.

Sanjeev Y. Tuli, MD, is a professor of pediatrics and chief of the Division of General Pediatrics at the University of Florida College of Medicine in Gainesville.

Sonal S. Tuli, MD, is an associate professor of ophthalmology at the University of Florida College of Medicine in Gainesville.