In the United States, 99% of snake envenomation cases are from members of the Crotalinae (pit viper; formerly Crotalidae) subfamily of the Viperidae (viper) family, which includes copperheads, rattlesnakes, and cottonmouths (water moccasins).1 According to the National Poison Data System, a database maintained by the American Association of Poison Control Centers cataloging every call to U.S. poison control centers, 1,766 cases of copperhead snake envenomation were reported in 2012, of which 382 occurred in patients 19 years or younger.2

The risk of significant morbidity and mortality is higher in children than in adults because of their smaller body size in relation to the dose of venom.3 We present 2 pediatric case reports of suspected venomous bites.

An 8-year-old boy was playing in the grass in the yard of his home at approximately 7:15 pm when he felt a bite on his right thumb. He did not see an animal or an insect, and he went inside to tell his mother. Bleeding, swelling, and bruising of the boy’s thumb began immediately following the bite. After giving him a dose of diphenhydramine, the boy’s mother used a stick to look into the bushes, where she found a copperhead snake, Agkistrodon contortrix (Figure 1). A family member killed the snake, and they brought it with them to the hospital for identification. 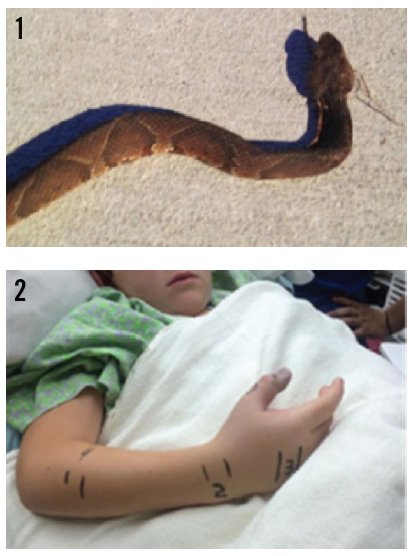 One vial of Crotalidae polyvalent immune Fab antivenin (CroFab) was administered at a local emergency department (ED). Swelling and joint pain over the boy’s right thumb worsened (Figures 2 and 3), and he was transferred to a metropolitan pediatric ED. The remaining 3 vials of the recommended dose of CroFab were administered there.

The patient had known allergies to ants and to amoxicillin, resulting in hives. His immunizations were up to date. His current medications were an epinephrine pen as needed for allergic reaction to ants, and loratidine 5 mg as needed. 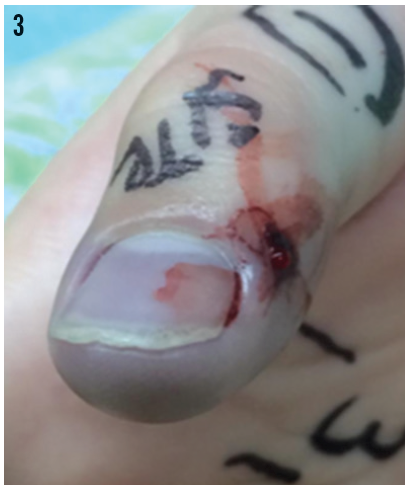 Coagulation studies were repeated frequently after antivenin administration. Results showed a low level of fibrinogen at 182 mg/dL. Follow-up test results were within the normal reference range, with fibrinogen increasing to 212 mg/dL approximately 8 hours later. The patient was discharged.

He presented to the clinic for follow-up visits at 1 week (Figure 4) and at 2 weeks (Figures 5-7). Because swelling and bruising still were present 2 weeks after the envenomation, debridement of the wound was recommended.

A 9-year-old boy was fishing with his father from the back of a truck at approximately 6:00 pm. He reached for his fishing pole and noticed a sharp, stinging sensation on the lateral aspect of his left hand.

Although the wound resembled a bite, no animal or insect was seen. Bleeding initially was minimal, but bruising and swelling developed, extending up to the elbow. 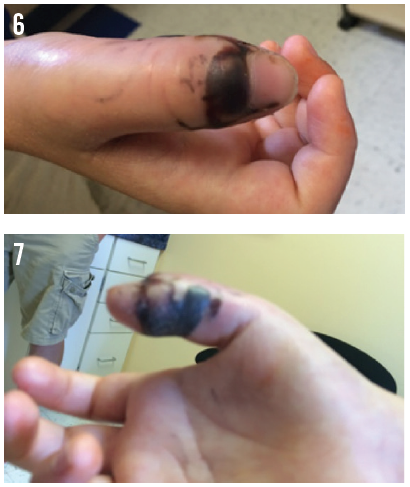 The patient presented to the local ED and was transferred to a metropolitan pediatric ED as the swelling progressed (Figures 8 and 9). A puncture wound was visualized on the boy’s left lateral hand at admission to the pediatric ED. Laboratory test results showed his D-dimer level to be elevated at 7 µg/mL and his fibrin split products level to be elevated at 40 µg/mL; other laboratory test values were within normal limits.

The patient was allergic to amoxicillin, with the reaction of hives. His immunizations were up to date.

He was given 2 mg/kg of methylprednisolone sodium succinate for injection, and a pediatric orthopedic surgeon was consulted. Laboratory test results were within normal reference ranges the following day, and the patient was discharged home. The swelling continued to decrease, and debridement was not necessary for the patient’s recovery.

Swelling was minimal when the patient presented to the pediatric clinic for a follow-up visit 3 weeks after the incident (Figure 10).

Although the presentation and progression of this boy’s symptoms mimicked a venomous snake bite, no snake was found at the scene of the incident. Therefore, the patient was treated symptomatically. His systemic signs did not warrant CroFab administration. 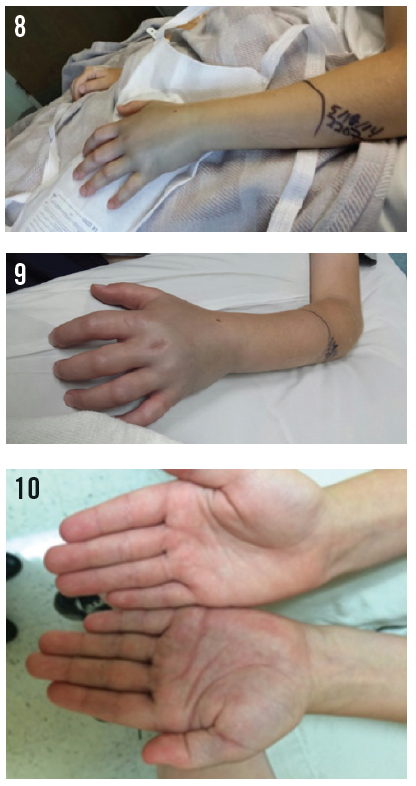 Pediatric CroFab dosages are the same as adult dosages, because dosage of antivenin reflects the venom load, not a patient’s size. It is suggested that administration of CroFab occur within 6 hours of envenomation.5 The usual initial dose is between 4 and 6 vials; after initial control of the envenomation is established, additional 2-vial doses may be administered every 6 hours for up to 18 hours (3 doses).5

Anaphylactic reaction to CroFab is uncommon, but patients should be monitored for a minimum of 8 hours after CroFab administration.5 Serum sickness, a delayed reaction to the antivenin, can occur 7 to 21 days following treatment. The first sign of serum sickness usually is urticaria or pruritus.

Ashley Morton, BS, is a second-year medical student at the Florida State University College of Medicine in Tallahassee, Florida.

Joseph Peter, MD, is on the faculty at the Florida State University College of Medicine in Tallahassee, Florida, and is a pediatrician at Crestview Pediatrics and Adolescent Center in Crestview, Florida.