A  20-month-old uncircumcised boy with no past medical history was brought to the emergency department (ED) by his mother with a complaint of a “white bump” on his penis. His mother had noticed the bump the day before when changing his diaper. She denied any trauma or any previous similar symptoms in the boy, and she reported no changes in his urinary habits, no blood in his urine, no penile swelling or discharge, and no other masses in the genital area.

The boy was born full-term and was delivered vaginally with no complications. The review of systems was negative for any recent illness, fever, vomiting, diarrhea, extremity edema, or swollen glands. In addition, his mother reported no history of urinary tract infections, genital infections, trauma, or abnormalities. The boy had no previous surgeries or procedures performed, and he had no known drug allergies. His vaccinations were up to date, and he was not currently taking any medications. His family and social history were unremarkable.

On physical examination, the patient’s vital signs were normal and stable, with a heart rate of 122 beats/min, respiratory rate of 24 breaths/min, temperature of 37°C, and blood oxygen level of 99% on room air. The rest of the examination results were unremarkable except for examination of the genitals, which showed an uncircumcised penis with nonretractile foreskin, a supple preputial orifice without scarring or induration, along with a 5 to 6 mm white, nodular, freely mobile mass located under the foreskin on the ventral aspect of the penis (Figure).

There was no penile discharge seen, and there was no erythema or edema of the penis or scrotum, no signs of infection, and no other masses or lesions noted. The boy’s testicles were descended bilaterally, and there was no apparent tenderness to palpation. Urinalysis was completed (clean catch) to rule out urinary tract infection, and results were negative. The patient was discharged home with a referral to urology, general instructions regarding foreskin care, and instructions to return to the ED if the current symptoms worsened or new symptoms developed. The urologist agreed with our diagnosis of smegmoma. 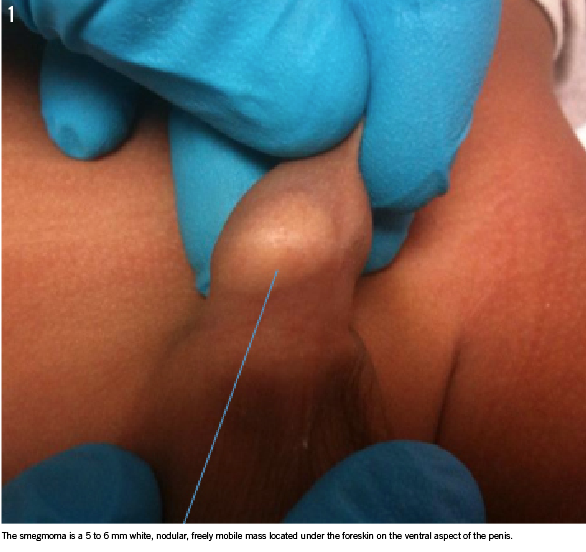 In uncircumcised boys with nonretractile foreskins, smegma collects under the foreskin. These collections often appear as white or yellowish lumps visible beneath the prepuce and may be incorrectly labeled as cysts.1,2 These collections are completely benign and are considered part of the natural process of the separation of the prepuce from the glans.3 Smegmomas are a normal occurrence that requires no treatment.4 Ultrasonography or painful procedures such as biopsy are not necessary and only watchful observation is needed. Smegmomas will be released as the foreskin separates and becomes more retractile.5

Other differential diagnoses include sebaceous cysts, epidermal inclusion cysts, and dermoid cysts. Although sebaceous cysts, which are also known as epidermal or epidermoid cysts, are the most common cutaneous cyst,6 penile sebaceous cysts are very rare.7 One case study describes an epidermal inclusion cyst in a circumcised boy that possibly developed from the circumcision itself.8 Other penile cysts are rare as well. Median raphe cysts are congenital cysts that can be fairly easily recognized by the history and location along the penile raphe.9 Dermoid cysts of the penis are even rarer, with the first, to our knowledge, described in 1997.10