A previously healthy 34-year-old woman with no past surgical history presented to the emergency department (ED) reporting abdominal pain.

History and physical examination. The patient stated that she had been in her usual state of health but while resting overnight had developed discomfort localized to the periumbilical region, which she described as sharp and stabbing. She denied radiation of pain elsewhere. The pain was not associated with nor aggravated by meals; however, she did admit to exacerbation of pain with any body movement, relieved by lying completely still in her bed.

The patient was afebrile at presentation, and her vital signs were stable. 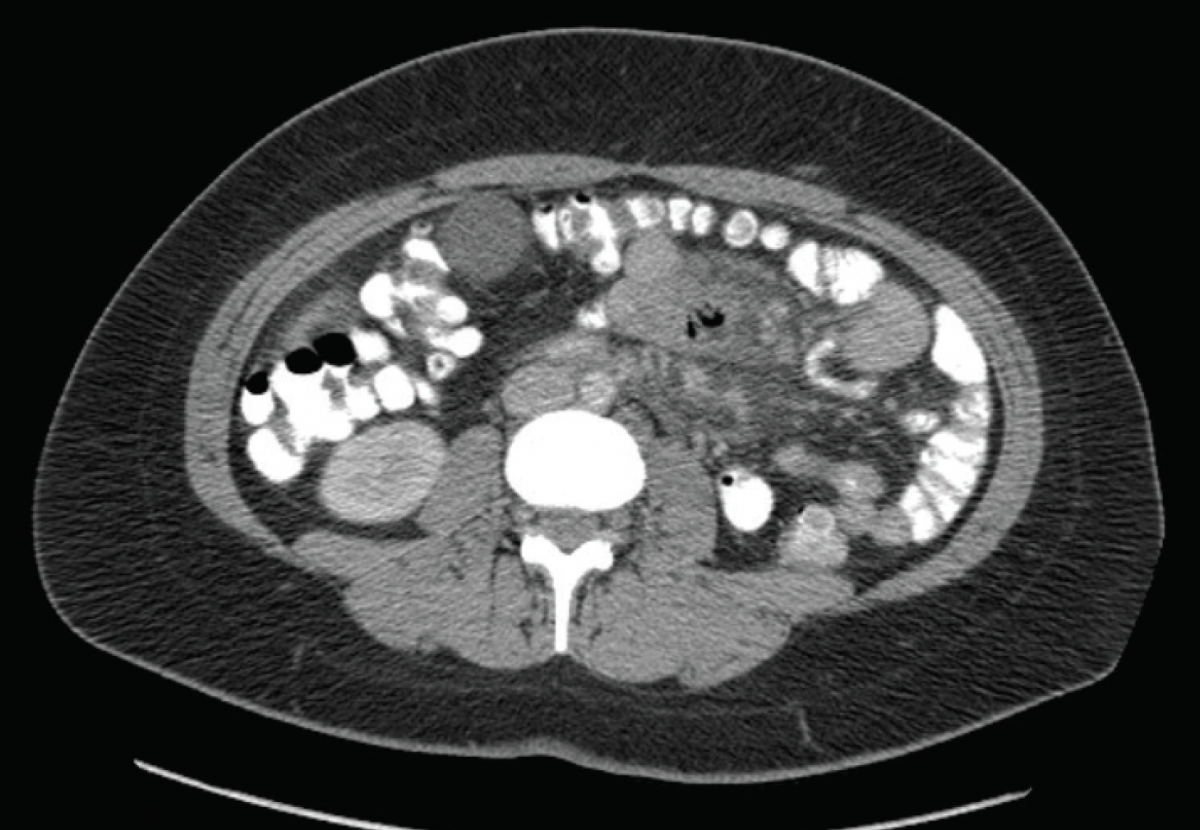 Outcome of the case. The remainder of her hospitalization was uncomplicated, and the patient was discharged 3 days later following clinical improvement in her symptoms.

Discussion. Abdominal pain is one of the most common presenting complaints in emergency medicine, comprising 7% to 11% of all ED visits.1,2 The differential diagnosis for cases of  undifferentiated abdominal pain is vast; left lower quadrant pain alone can manifest with gastrointestinal, urinary, mesenteric, vascular, or musculoskeletal mechanisms.2 Careful evaluation and recognition of less common presentations is therefore important. Diverticular disease, for example, tends to involve the sigmoid colon and presents with tenderness in the left lower quadrant on evaluation in the majority of cases; however, diverticular disease also can involve the small bowel in rare instances,3 such as in our patient’s case.

Diverticulosis and diverticular disease are common causes of abdominal pain, and its incidence is increasing worldwide.3 The mechanism is controversial but is thought to involve acute inflammation of the diverticulum from retained fecal material and fecal microbiota, with resultant abscess formation and microperforation.3 Diverticulitis of the small bowel, however, is an uncommon presentation of diverticular disease, with a prevalence ranging from 0.06% to 1.3%.4 The majority of reported cases describe duodenal involvement (79%), followed by jejuno-ileal involvement (18%).4

Potential complications include perforation with peritonitis, although this is thought to be rare. Surgical management with resection is a consideration in cases of severe disease; however, long-term resolution of symptoms has been described with intravenous antibiotics alone.6

As demonstrated in our patient’s case, small bowel diverticulitis can present with minimal clinical symptoms, and laboratory test results can often be unremarkable.6 Imaging studies along with high clinical suspicion are the mainstays of ED diagnosis, particularly in patients younger than 40 years.

Medication
Medication
Heat-related Myocardial Infarction May be Associated With Cardiovascular Medications
Previous research has suggested that heat exposure may increase the risk of acute myocardial infarction. In this study, researchers examined the impact of certain medication usage on the relationship...
Insulin Management
Insulin Management
High Insulin Doses in People With Type 1 Diabetes Linked to Cancer Risk
A higher incidence of certain cancers has been previously reported among individuals with type 1 diabetes. In this study, researchers examined daily insulin dosages as a potential risk factor for cancer...
Viral Disease
Viral Disease
Monkeypox Declared a Global Outbreak With Defined Symptoms
Researchers aimed to establish common symptoms associated with monkeypox virus infection to assist in minimizing the spread of the infection, and bringing awareness to clinicians and the public.
Health Care Disparities
Health Care Disparities
Racial, Ethnic Disparities in ICU Oxygen Supplementation
Researchers determine the racial and ethnic differences in patients that receive supplemental oxygen in the intensive care unit.
Orthopedic Surgery
Orthopedic Surgery
Total Knee Arthroplasty Without Tourniquet Does Not Increase Risks
The researchers evaluated the postoperative clinical outcomes and complications of TKA with and without the use of a tourniquet during surgery.