Skin Lesions Erupt Across a Teenager’s Upper Back

A 17-year-old obese Caucasian female presented with an asymptomatic, brownish eruption on the upper back of approximately 1 year’s duration. The lesions started off as small brownish macules that slowly increased in size and coalesced to form patches with a reticulated pattern over time.

She was in good health and not on any medication. There was no family history of similar skin lesions. 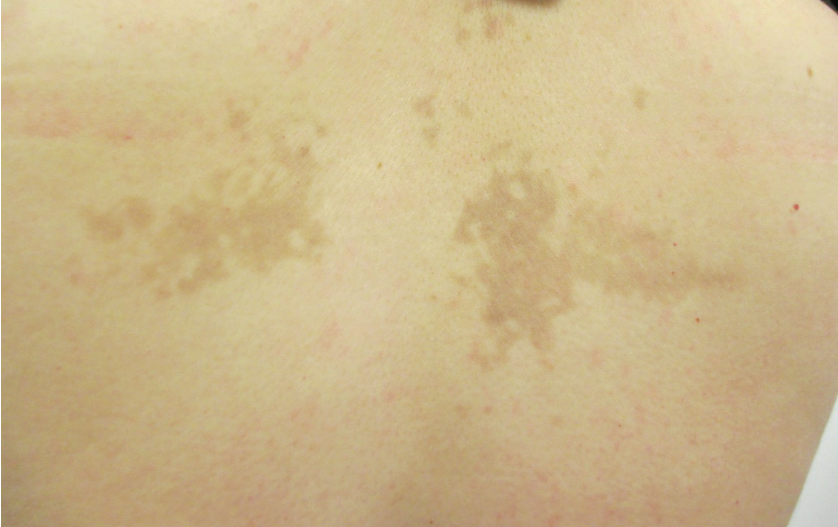 Physical examination revealed multiple, well-demarcated, brownish, confluent and reticulated macules and patches localized to the upper back. Her height was 168 cm, weight 92 kg, and body mass index 32.6 kg/m2 (normal value <25 kg/m2). The rest of the physical examination was normal.

Confluent and reticulated papillomatosis is an uncommon condition; the exact prevalence of it is not known. Typically, the condition begins in the late teens or young adulthood, with a mean onset age of 15 years.4,5 There is no known predilection for race or ethnicity.6

The condition is slightly more common in females than males, except in Japan where the reverse is true.7 The majority of cases are sporadic but familial cases have been reported.1

The exact etiopathogenesis is not known. There are several hypotheses about the etiopathogenesis of this condition. Confluent and reticulated papillomatosis may result from an endocrine disturbance because the condition is more commonly seen in patients with obesity, diabetes mellitus, Cushing’s disease, hirsutism, menstrual irregularities, thyroid disorder, and pituitary disease.7

The condition may be a disorder of keratinization, as increased transition cell layers and lamellar granules in the stratum granulosum—along   with increased involucrin, keratin 16, and Ki-67 expressions—have been demonstrated in affected patients.8-10 Some authors suggest that the disease is an abnormal host response to Malassezia species or Actinomyces dietzia.1 There may be a genetic predisposition, as evidence has shown a familial occurrence in some cases.1

Initially the lesions present as small, round, erythematous, flat-topped, hyperkeratotic or verrucous papules or macules.5,6 These papules or macules gradually enlarge to 4 to 5 mm and coalesce to form confluent, slightly scaly patches or plaques centrally and a reticular pattern peripherally.5,6

Over time, the color of the lesions become brown or dull brown.5 In rare cases, the condition can manifest as rippled reticulated erythema, vertically rippled and keratotic plaques, or as atrophic macules with a shiny quality or a surface change resembling cigarette paper.6,10

Sites of predilection include the neck, interscapular region, intermammary area, and epigastric area.7 Other areas—such as the face, neck, shoulders, axillae, breasts, flanks, lower abdomen, pubic area, and groin—may also be affected.6 The palmoplantar and mucosal areas are usually spared.7 The lesions are usually asymptomatic and occasionally pruritic.10 There can be a marked xerosis.5

The diagnosis is mainly clinical and can be aided by dermoscopy, which typically shows brownish pigmentation with poorly defined borders covered with white scales (corresponding to basal layer hyperpigmentation, parakeratosis, compact hyperkeratosis) and a pattern of labeled “sulci and gyri” (corresponding to papillomatosis).7

A potassium hydroxide wet-mount examination of skin scrapings can be performed to rule out a fungal infection. Other laboratory investigations are usually not necessary in an otherwise healthy individual. Skin biopsy is warranted for atypical cases or when the diagnosis is unclear.

Confluent and reticulated papillomatosis does not lead to any systemic disease. It is, however, socially embarrassing because of the cosmetic disfigurement.

Confluent and reticulated papillomatosis tends to run a chronic course, with exacerbations and remissions. The condition rarely spontaneously resolves with time.11

Underlying causes, such as obesity and endocrine disorders, should be treated if possible. For patients desiring treatment for cosmetic or symptomatic reasons, oral antibiotics such as minocycline, doxycycline, erythromycin, clarithromycin, and azithromycin have been used with success.1  Minocycline, in particular, is the treatment of choice in children over 8 years of age and those with permanent teeth.1,5,10