The Sign of Leser-Trélat in Advanced Extrapulmonary Small Cell Carcinoma

A 70-year-old man presented to the emergency department with a history of right-sided chest pain of several weeks’ duration. He described the pain as sharp right upper quadrant (RUQ) abdominal pain that was provoked by food ingestion and lasted for about an hour after eating. The patient revealed that he had started experiencing dysphagia and had an unexplained weight loss of at least 23 kg over the past year or so. 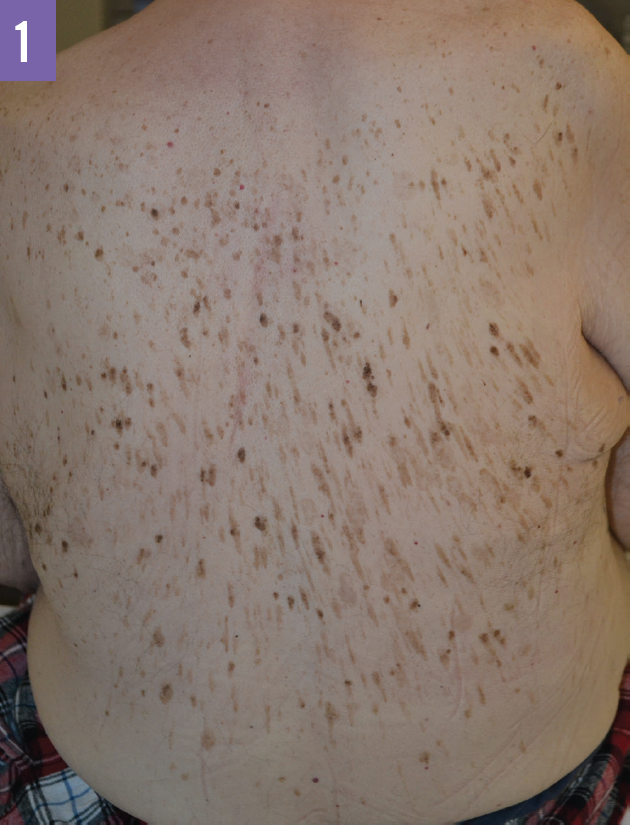 Physical examination. A careful physical examination revealed numerous plaques on the patient’s back with a hyperpigmented, pearly, “stuck-on” appearance in a “raindrop” distribution (Figure 1). The patient disclosed that these “skin tags” had spontaneously appeared on his back about 2 years ago. Given the location of the lesions, he was unsure of the exact time of their onset and had only noticed them after visiting an outpatient dermatology clinic for treatment of a sebaceoma on his nose. Records from these dermatology clinic visits showed that he had undergone cryotherapy resection of multiple inflamed seborrheic keratoses on his back. At the time, the patient had been reassured that the lesions on his back were benign. According to the man’s recollection, hundreds of these lesions then reappeared after the initial removal.

Laboratory testing. Computed tomography scanning of the chest, abdomen, and pelvis showed an 8.8 × 7.3-cm mass filling the gastrohepatic space (Figure 2). Multiple hypodensities in the liver were consistent with hepatic metastasis. No disease processes were found in the chest cavity. Esophagogastroduodenoscopy confirmed a malignant-appearing mass in the gastroesophageal junction and submucosal nodules in the esophagus. Biopsies of these lesions revealed small oat cell histology that stained positive for synaptophysin (Figure 3, left) and chromogranin A (Figure 3, right), findings consistent with small cell carcinoma arising at the squamocolumnar junction of the upper gastrointestinal tract. 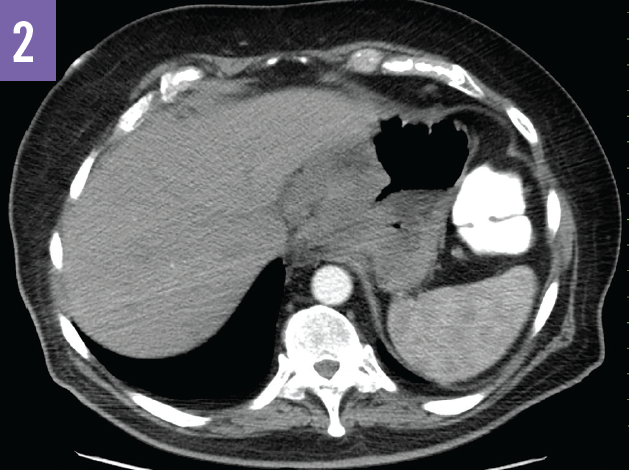 Diagnosis. Based on the histopathologic and radiologic findings, the diagnosis of stage IV extrapulmonary small cell carcinoma was made.

Discussion. The sign of Leser-Trélat is a well-described paraneoplastic syndrome characterized by sudden eruption of multiple inflammatory seborrheic keratosis associated with underlying malignancy. This sign is most commonly associated with visceral malignancies,1,2 but it also has been described in other neoplastic conditions such as metastatic melanoma,3 extrapulmonary small cell carcinoma, and small cell carcinoma of the lung.4,5

At the time of our patient’s presentation, several clinical signs pointed to an underlying malignant condition: the RUQ abdominal pain associated with food intake, the seborrheic keratosis found on his back, and the history of dysphagia and unexplained weight loss. Among these signs, the cutaneous lesions were the earliest to be documented. Even though the sudden eruption of multiple seborrheic keratoses presenting initially on the trunk and subsequently on the extremities and face and its association with gastrointestinal tract malignancies is well documented, the diagnosis of small cell carcinoma of the gastroesophageal junction was made more than 1 year after the first skin biopsy.

Because paraneoplastic syndromes may precede the clinical manifestations of the underlying malignancy, clinicians should be cognizant of the physical examination findings suggestive of these syndromes. Early intervention could lead to better outcomes. What makes our patient’s case unique is the association of explosive seborrheic keratosis with gastroesophageal small cell carcinoma, which to our knowledge has not been reported in the literature.

Outcome of the case. Our patient underwent chemotherapy and radiation therapy. However, his condition progressively deteriorated.

He was admitted to hospice and died 7 months after the initial diagnosis of small cell carcinoma.