Short Stature and Failure to Thrive— Is It Celiac Disease?

A 4 ½-year-old white girl with short stature, a long history of failure to thrive, and suspected refractory celiac disease presented for a presurgical evaluation before placement of a gastrostomy tube.

History. The child was born at full term with a birth weight of 3.2 kg. At age 2 months, her length and weight were at the 25th percentile and head circumference was at the 97th percentile. Her weight and length decelerated and were below the 3rd percentile at age 9 months (Figure 1). However, no workup was done. 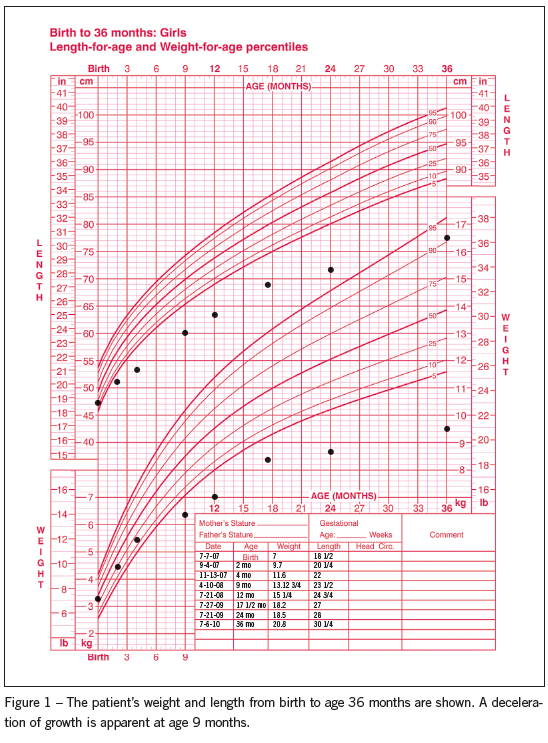 After 2 years, the child’s height and weight remained below the 3rd percentile, with head circumference at the 75th percentile (Figure 2). Refractory celiac disease was considered, and corticosteroid treatment with gastrostomy tube placement was recommended. The parents requested a second opinion before the surgery.

The majority of patients with celiac disease (92% to 96%) carry the HLA DQ2 gene, and most of the rest (6% to 8%) carry HLA DQ8, which gives the test very high negative predictive value. The results can be useful in excluding celiac disease in cases in which histology is not pathognomonic, or the diagnosis is in doubt. On the other hand, 30% to 40% of white patients carry either HLA DQ2 or HLA DQ8, but celiac disease will develop in only 1%. Although having the right gene makes the patient susceptible, it is not enough to cause celiac disease.

This patient had negative celiac serological titers and persistent failure to thrive despite adhering to a strict gluten-free diet. This suggested that an endocrine etiology rather than celiac disease was the true cause of her persistent failure to thrive. MRI of the brain showed an area of T1 hyperintensity in the upper pituitary stalk and hypoplastic pituitary stalk and gland, with absence of the posterior pituitary bright spot (Figure 3). Findings were consistent with posterior pituitary gland ectopia.

Results of a GH stimulation test confirmed the deficiency, and replacement therapy was started. 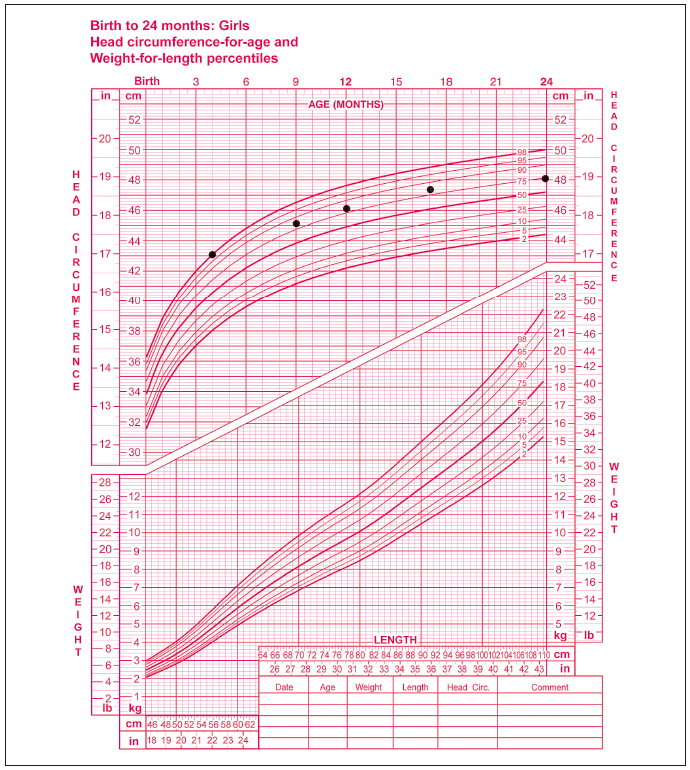 A RARE CAUSE OF GH DEFICIENCY

There have been many reports of GH deficiency in association with posterior pituitary gland ectopia. There is no clear etiology for the condition; data suggest a pathogenesis similar to that of septo-optic dysplasia.1,2 Possible theories are defective neuronal migration during embryogenesis and transection of the pituitary stalk followed by hypertrophy of the proximal axons with subsequent reorganization. Whatever the origin,
releasing factors of the hypothalamus only reach the anterior pituitary lobe via general circulation. This results in frequent GH deficiency and, in some instances, panhypopituitarism.3

Diagnosis is usually made by brain MRI that shows high T1 signal at the median eminence (floor of the third ventricle) and absent normal posterior pituitary bright spot.4

No treatment is required for the ectopic pituitary per se, but the frequently associated GH deficiency, or less frequently panhypopituitarism, is managed with replacement therapy. 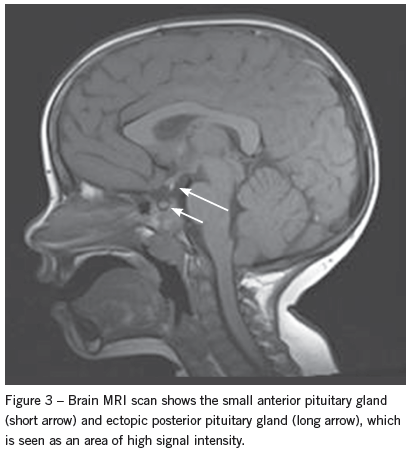 A child with celiac disease or other form of malnutrition typically has a drop-off in weight first followed by a drop-off in height later. This child seemed to have a length drop-off first, and the weight for height looked relatively normal. In addition, the child’s parents were not short (mother’s height was 158 cm and father’s height was 176 cm). Thus, the child’s growth curve suggested short stature due to an endocrine problem rather than a malnutrition problem, and referral to a pediatric endocrinologist was warranted at 9 months.

If the patient’s parents were of short stature, familial short stature would be another consideration. However, in this case, MRI revealed posterior pituitary ectopia, which led to the correct diagnosis of GH deficiency.