A 32-year-old pregnant woman presented to her obstetrician with 1 week of loose, bloody bowel movements up to 7 times per day, along with lower abdominal cramping and urgency. The gravida 2, para 1 woman was at 30 weeks of gestation. She had ulcerative colitis (UC) that was in clinical remission, and she was on mesalamine extended-release, 1.5 g/day. 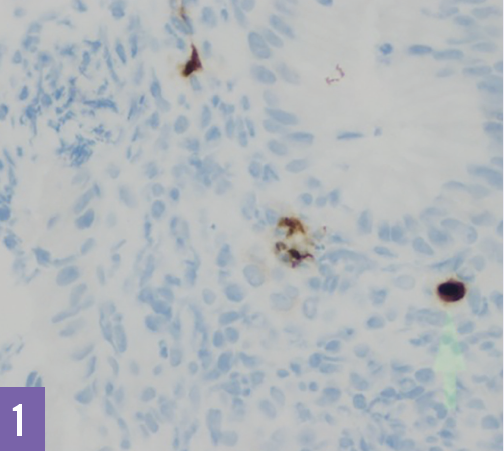 History. Since her diagnosis 11 years previously, her UC had been reasonably controlled on oral 5-aminosalicylate drugs. She had experienced 5 flares requiring oral corticosteroids, with the last having occurred 5 years prior. 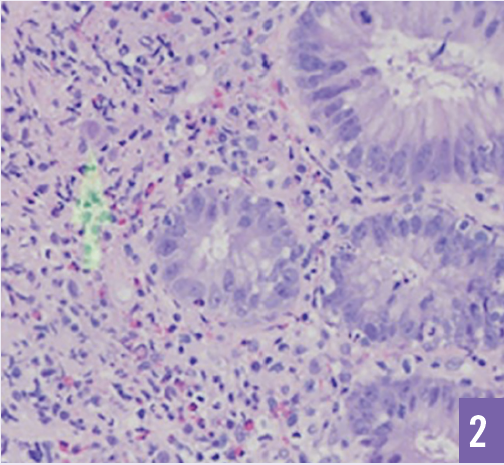 Discussion. Inflammatory bowel disease (IBD) is a chronic inflammatory condition with a waxing and waning clinical course. Pregnant women with IBD can have a variable clinical course with two-thirds having persistent or worsening symptoms during pregnancy and the potential for clinical deterioration.1 Active disease can alter the course of pregnancy with a risk of low birth weight, preterm labor, spontaneous abortion, and deep vein thrombosis.2

The goal of therapy is to maintain remission throughout pregnancy and prevent disease-related complications.

CMV is a common infection that affects 40% to 90% of adults worldwide.3 Primary infection tends to present with mononucleosis-like symptoms; however, in some patients, infection can be clinically silent. CMV is the most common cause of congenital infection in the United States and affects more children than other conditions such as spina bifida and Down syndrome, with an estimated annual health-related cost of between $1 billion and $2 billion.4

Corticosteroids are an essential part of IBD therapy, but 15% of UC cases and 20% of Crohn disease cases are corticosteroid-resistant, and these patients carry a higher risk of complications requiring surgical intervention.5 Several mechanisms have been implicated in corticosteroid-resistant disease, including concomitant infectious colitis.5 In patients with corticosteroid resistance, the prevalence of CMV disease is estimated to be between 21% and 36%.6 The clinical significance of CMV infection in IBD has been a matter of debate, with some studies suggesting that CMV is a bystander in severe disease, especially in immunosuppressed patients, while other studies implicate CMV in the genesis of flares and active infection. There are no large, randomized, controlled trials discussing the impact of the CMV diagnosis or CMV therapy in patients with IBD flares. We believe that patients who do not respond to corticosteroid therapy should be tested for CMV colitis with tissue biopsy, and treated if the results are positive.

In CMV disease, symptoms are detected at the target organ, whereas CMV infection is detected by way of the presence of antibodies or antigens in the blood.7 In cases of suspected CMV disease, the diagnosis should be made with tissue PCR or immunohistochemistry using monoclonal antibodies against CMV immediate early antigen.8 Coupling CMV immunoglobulin M with immunoglobulin G avidity assays is well supported in clinical screening algorithms for primary CMV infection in pregnant patients with unknown immune status.8,9 Serologic conversion may help direct the need for procedures and tissue biopsy.10

The pharmacotherapy of choice for CMV disease is IV ganciclovir, 5 mg/kg, for 2 to 3 weeks. After 3 to 5 days, a switch to oral valganciclovir for the remainder of the course may be considered. In cases of ganciclovir resistance or intolerance, foscarnet (for 2-3 weeks) can be used.11 Ganciclovir and valganciclovir are in pregnancy category C; however, several case reports have shown promising results with no complications in the fetus or mother.

Outcome of the case. We discussed with the patient the risk of preterm labor, CMV translocation to the fetus, and her clinical status before starting therapy. IV ganciclovir was initiated at 5 mg/kg twice daily, resulting in rapid response and clinical remission. Corticosteroid taper was completed in conjunction with a 21-day course of IV ganciclovir. She maintained clinical remission and delivered a healthy boy without major complications. No CMV was detected in the newborn.

In the case of our patient, who was in the third trimester of pregnancy, timely diagnosis and treatment of CMV colitis helped attain remission and avoid the possible complications of disease flare.

The diagnosis of CMV colitis must be considered in patients with severe colitis flare that is not responding to corticosteroid therapy. This is imperative before the initiation of salvage immunosuppressive therapies or surgical procedures.