In recent years, the use of psychotropic medications such as antidepressants and benzodiazepines has increased, particularly notably in military and Veterans Affairs health facilities, treating veterans and active-duty members mostly associated with the wars in the Persian Gulf, Iraq, and Afghanistan. With the increased use of such medications, the risk of adverse effects and medication-medication interactions rises proportionally.

A 30-year-old man with a past medical history significant for anxiety, depression, and chronic low back pain presented to the emergency department (ED) with a 24-hour history of altered mental status, along with tremors in the bilateral upper and lower extremities and facial twitching. Because of the patient’s intermittent confusion, his spouse provided most of his history. He was a military veteran who had been deployed to Iraq twice and was being followed by a mental health provider for depression and other service-related conditions. His prescription medications included citalopram, metaxalone, and tramadol.

The patient lived with his wife. He had worked as a public accountant but had been laid off several months ago. His wife denied any known tobacco smoking or illicit drug use history. He drank 4 to 5 glasses of vodka per week, and maybe more since the loss of his job. His wife denied his using any over-the-counter medications except occasional diphenhydramine to help with insomnia. He had been on multiple psychotropic medications in the past, and his citalopram dosage had been increased recently to better treat his depression.

The patient’s vital signs included a heart rate of 115 beats/min and an oral temperature of 38.1°C. He was not oriented to self, place, or time. He was diaphoretic. His pupils were 8 mm and were both sluggishly reactive to light. He had unprovoked twitching of the muscle fibers on both sides of his face. His lungs were clear to auscultation. He was tachycardic, with no murmurs, rubs, or gallops. High-frequency tremors were present in all extremities but were more pronounced in the lower extremities. Inducible clonus was present bilaterally in his lower extremities. His muscle tone was increased throughout.

Initial laboratory test results were remarkable for a creatinine kinase level of 722 U/L and a lactate level of 23.4 mg/dL. Results of a comprehensive metabolic panel showed an elevated serum creatinine level of 1.25 mg/dL and slightly elevated levels of alanine aminotransferase (49 U/L) and aspartate aminotransferase (41 U/L). The serum alcohol level was 10 mg/dL, and a urine drug screen was positive for tricyclic antidepressants. Results of urinalysis, a thyrotropin test, and a complete blood cell count were unremarkable. He was HIV-negative.

A chest radiograph showed a normal cardiac silhouette with no infiltrates or masses. A computed tomography scan of the head performed in the ED showed no acute abnormalities.

The patient received a diagnosis of serotonin syndrome, given that he met the triad of clinical criteria: neuromuscular excitation, autonomic stimulation, and altered mental status, while concomitantly using a causative agent.

Serotonin, produced by the decarboxylation of l-tryptophan, is a neurotransmitter discovered in the 1940s that has a significant role in many physical and mental conditions. Serotonin toxicity, also known as serotonin syndrome (SS), refers to the clinical effects of excess serotonin on the central and peripheral nervous system. Serotonin quantities are tightly regulated by various mechanisms in the body, including reuptake mechanisms and various enzymes. There are 7 serotonin receptors, with multiple members, but no single receptor appears to be involved in the development of SS. Some research suggests that the 5-HT2A receptor may have a major role in development of SS.1-3

SS is a potentially life-threatening adverse drug reaction. It can result from therapeutic drug use, drug interactions, and intentional self-poisoning. Excess stimulation of serotonergic receptors produces the wide range of clinical manifestations, which can range from mild to sometimes lethal.1,2

The incidence of SS has gone up with the increasing number of serotonergic agents used in clinical practice.1,2 The syndrome occurs in 15% of persons who overdose on selective serotonin-reuptake inhibitors (SSRIs).1,2 The diagnosis is often based on the patient’s presenting symptoms along with a history of taking the culprit medications.1,2 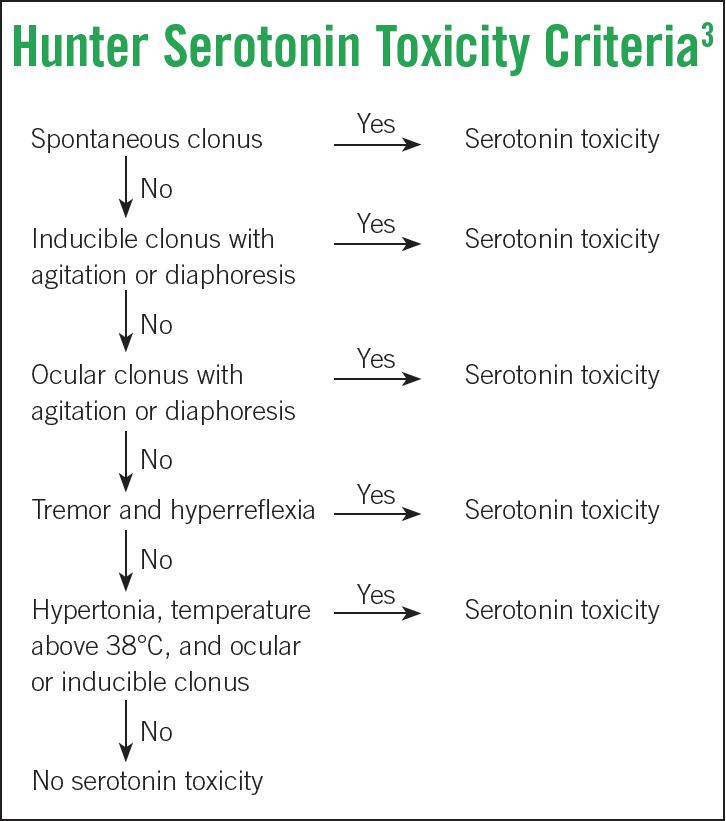 The Hunter Serotonin Toxicity Criteria represent a sensitive and specific method of diagnosis (Figure). This method uses a small, specific number of clinical features for a more accurate diagnosis: clonus (inducible, spontaneous, or ocular), agitation, tremor, hyperreflexia, and diaphoresis. Use of a serotonergic agent within the past 5 weeks of presentation is necessary for diagnosis.1-4

Among the medications that can cause SS are SSRIs, monoamine oxidase inhibitors (MAOIs), tricyclic antidepressants, opioid analgesics, cough suppressants, antibiotics, antimigraine agents, lithium, and herbal remedies. MAOIs have been implicated in severe cases of SS. The syndrome is independent of the dosage, given that a single therapeutic dose of an SSRI has been known to cause SS.1,2,4

No laboratory test can confirm the diagnosis of SS, but some common laboratory abnormalities include metabolic acidosis, rhabdomyolysis, elevated serum aminotransferases, disseminated intravascular coagulation, and kidney failure. Many of these abnormalities result from the poorly treated hyperthermia often seen in such patients.1,2,4

Management of SS includes the timely removal of the offending agent, supportive care with intravenous fluids, and the control of agitation, usually with benzodiazepines. Hyperthermia and muscle rigidity are common, and supportive therapy to prevent secondary complications is crucial, including a patent airway and neuromuscular paralysis. The administration of 5-HT2A antagonists such as cyproheptadine and chlorpromazine remains controversial. No controlled trials have documented their effectiveness, but there are numerous case reports of patients improving after the administration of such agents. Cyproheptadine, the most widely used 5-HT2A antagonist, can cause sedation, which can be useful in the overall treatment of SS. However, cyproheptadine usually is taken orally, and its effects can be hindered with the concomitant use of activated charcoal. An initial dose of 12 mg should be considered, followed by an additional 2 mg every 2 hours if symptoms continue. The maintenance dosage is usually 8 mg every 6 hours. Chlorpromazine can cause hypotension and hence patients benefit from volume loading.1,2,4

Activated charcoal can also be effective but only if given within the early hours of SS. Benzodiazepines are used to control agitation and have been shown to improve survival in animal models by blunting the hyperadrenergic response in SS. Interestingly, antipyretic agents have no role in the management of SS. Most patients improve after 24 to 72 hours of ingestion of the serotonergic medication.1,2,4

Our patient was managed supportively, with intravenous fluids, benzodiazepines, and cyproheptadine. His mental status dramatically improved within 12 hours of presentation. He was strongly counseled on avoiding the use of multiple medications that could have contributed to his presentation and eventually caused death. He was also counseled on the use of alcohol. He was discharged with instructions to follow up with his primary care provider and his mental health provider within 1 week for better management of his psychotropic medications.

Mazyar Malakouti, MD, is an internist at the University of Texas Health Science Center at San Antonio.

Sayed K. Ali, MD, is a faculty member in the Department of Medicine at the Orlando Veterans Affairs Medical Center in Orlando Florida.