A Series of Cases Involving Cardiometabolic Disease and Related Conditions

A 66-year-old African American man was referred to the cardiology clinic by his primary care physician for abnormal electrocardiography (ECG) findings. His past medical history was significant for hypertension, dyslipidemia, and gastroesophageal reflex disease.

History and physical examination. The patient had been experiencing urinary tract symptoms and had been scheduled to undergo a prostate biopsy but required a preoperative clearance. Findings of a review of systems were positive for dyspnea on exertion (DOE). On physical examination, his blood pressure was 135/70 mm Hg, his heart rate was 82 beats/min, and his respiratory rate was 14 breaths/min. He had normal S1 and S2 and had no murmurs. His lungs were clear to auscultation.

Diagnostic tests. As a part of the preoperative workup, the patient underwent a cardiac stress test, given that his initial ECG findings (Figure 1) were consistent with inferolateral ischemia and left ventricular hypertrophy (LVH). Nuclear medicine treadmill stress test results showed a reversible perfusion defect in the inferior and lateral walls. 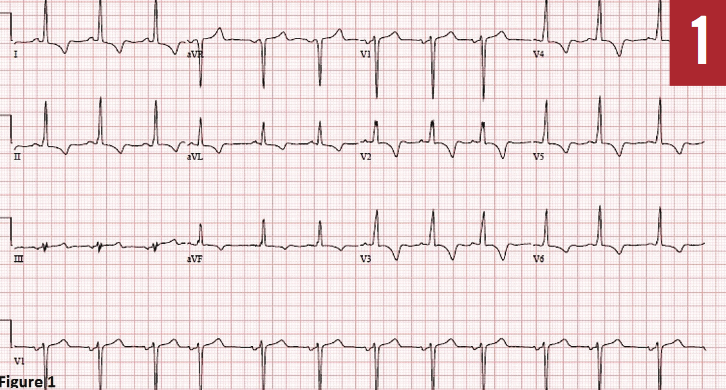 During a subsequent office visit, an ECG showed no new changes compared with the previous ECG. His echocardiography findings showed an ejection fraction of 50% to 55% and mid-left ventricular obstruction, with late-peaking systolic flow from the neck and paradoxical early diastolic flow from apex to base, suggesting left ventricular apical aneurysm. 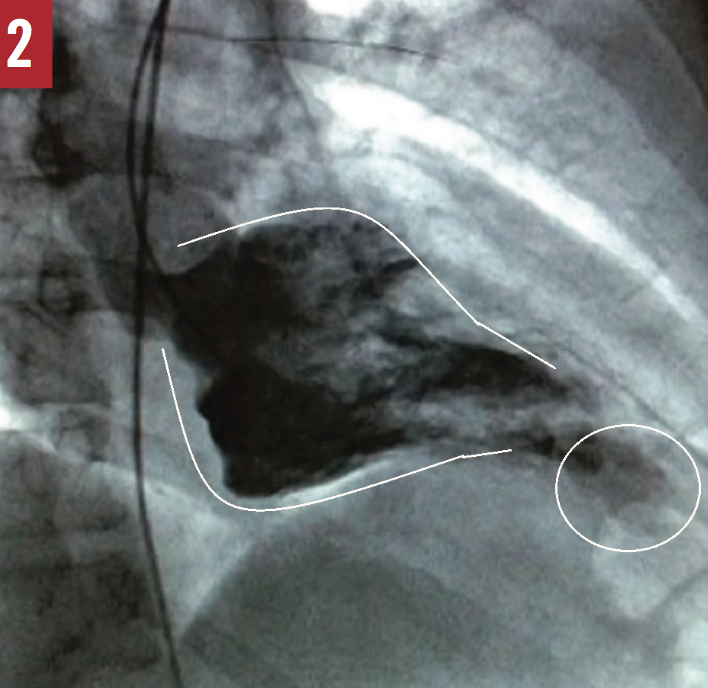 Figure 2: Spade-like appearance of the left ventricle in end-diastole (lines), with delineation of apical aneurysm (circle) during LHC.

Treatment. The patient was started on a regimen of aspirin, a statin, lisinopril, and hydrochlorothiazide. He was eventually discharged from the hospital in stable condition and was scheduled for outpatient follow-up.

Discussion. Yamaguchi syndrome, also known as apical hypertrophic cardiomyopathy (AHC), is a rare variant of hypertrophic cardiomyopathy. It most commonly presents in the Asian population, particularly in the Japanese population.1 The occurrence rate of this syndrome in the Western population is approximately 3%,2 compared with as high as 25% in the Japanese population.3 Only a very small number of cases have been reported in the African American population, and perhaps none with the presence of an apical aneurysm.

Yamaguchi syndrome is a relatively benign apical variant of hypertrophic cardiomyopathy. The first constellation of characteristic diagnostic ECG findings of Yamaguchi syndrome was reported in 1976, when Sakamoto and colleagues1 described a peculiar ECG finding of localized T-wave inversions in patients with hypertrophic cardiomyopathy. However, the ventriculographic features described by Yamaguchi and colleagues3 in 1979 set the foundation for diagnosis of this condition. Further classification of this syndrome, based on the characteristic morphologic appearance of the heart on echocardiography, includes pure apical, distal-dominant, and basal hypertrophy.4

Symptoms such as angina (16%), atypical chest pain (14%), and palpitations (10%) comprise the majority of subjective complaints and are related to the demand ischemia of the cardiac muscle; other symptoms such as presyncope and syncope (6%) and dyspnea (6%) are caused by low cardiac output as a result of the shortening of diastole in the setting of an increased heart rate.5

The initial nonspecific diagnostic test for this condition is ECG. No strictly defined ECG criteria have been established for the diagnosis of AHC; however, there is a well-recognized pattern of “giant” T-wave inversions in precordial leads, most commonly in V3 through V5, as well as LVH. On echocardiography, the ratio of apical to posterior wall thickness must be 1.3 or more, as well as the apical wall thickness of 15 mm or more during diastole.6 However, echocardiography may not be the best modality for evaluation of the apical portion of the heart; echocardiography with contrast yields better specificity and sensitivity. The widely recognized ventriculographic feature of AHC is a spade-like appearance of the left ventricle during end-diastole.3 More recent studies indicate that cardiac magnetic resonance imaging (MRI) should be the diagnostic gold standard due to the better visualization it affords of the heart apex, facilitating evaluation of thickness and the presence of aneurysms, fibrosis, and thrombi, which often are obscured on echocardiography, especially in people with certain body habitus and anatomical position of the heart in thoracic cavity.7

There appears to be no clear recommendation about the appropriate time for initial and subsequent follow-up among patients with Yamaguchi syndrome. At our institution, we recommend follow-up between 1 and 6 months depending on severity at initial presentation. Despite that MRI is the gold standard, echocardiography is the first diagnostic modality we opt for at the initial follow-up visit.

One retrospective study5 showed a relatively benign prognosis with respect to cardiovascular mortality, with no apparent association between sudden cardiac death and AHC in the North American population; however, these patients were at risk for stroke, arrhythmias, and myocardial infarction.5

In our patient’s case, the initial ECG showed LVH and T-wave inversions in V2 through V6 with negative deflection in V3. However, the diagnosis of apical hypertrophic variant was confirmed during LHC and with ventriculography showing the classic spade-shaped left ventricle and apical aneurysm during end-diastole. Apical aneurysm can occur in patients with hypertrophic cardiomyopathy and is associated with an increased risk of cardiovascular morbidity and mortality such as sudden cardiac death10; however, no data exists to support this association in patients with AHC.

Outcome of the case. At a follow-up visit 3 weeks after his initial presentation, the patient denied having any new symptoms and reported that his DOE had improved slightly. He now has a scheduled follow-up visit every 6 months and has continued to be symptom-free. He likely will undergo placement of an implantable cardioverter defibrillator for primary prevention in the near future.

A 59-year-old woman presented to the emergency department with left-sided weakness, left facial droop, slurred speech, loss of balance, and headache that had begun at 5 pm the previous day. After her symptoms had started, she had fallen multiple times as a result of the left-sided weakness and dragging of her left foot. She denied having chest pain, dyspnea, lightheadedness, syncope, or head trauma.

History. The patient’s past medical history was significant for hypertension, hyperlipidemia, depression, and chronic pain. She was a daily smoker with a 40 pack-year history. She denied any alcohol or drug use. She had not had any recent hospitalization or illnesses.

Physical examination. The patient had a blood pressure of 223/101 mm Hg. The rest of her vital signs were normal. Neurological examination findings were as follows: she was awake, alert, and oriented to person, place, time, and events; cranial nerves II through XII were grossly intact; speech was normal; deep-tendon reflexes were 2+ (normal) bilaterally; there were no sensory deficits and no hemispatial neglect; left upper- and lower-extremity strength was mildly decreased (4/5); right upper- and lower-extremity strength was normal; and her National Institutes of Health stroke scale score was 4 points. The patient’s facial droop and slurred speech had resolved. The rest of the physical examination findings were unremarkable.

CT angiography of the head and neck (Figure 4) demonstrated a thrombus completely occluding the proximal right common carotid artery and 40% to 50% stenosis of the left proximal internal carotid artery. Results of echocardiography were normal, with an ejection fraction of 65% to 70%. 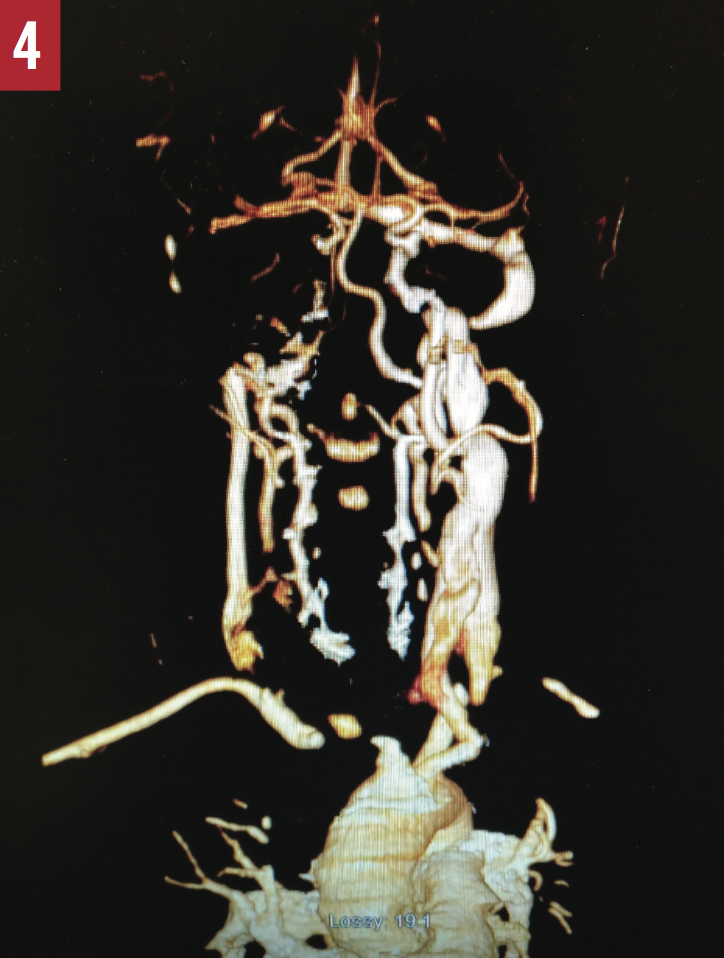 Discussion. A stroke or cerebrovascular accident is an abrupt onset of a neurologic deficit that is attributable to a focal vascular cause. The 2 types of stroke are hemorrhagic and ischemic. The latter is caused by reduced or complete lack of blood flow to the brain, which results in tissue damage. Ischemic stroke can be classified based on the underlying cause, such as large-artery atherosclerosis, cardioembolism, small-vessel occlusion, and undetermined etiology.1 A large-artery atherosclerotic stroke occurs when a blood clot forms on an atherosclerotic plaque within the artery and blocks blood flow to a part of the brain. Determining the cause and type of stroke influence the choice of treatment plan.

According to American Heart Association/American Stroke Association guidelines,2 the first-line treatment for a patient who has an acute ischemic stroke is intravenous thrombolysis with alteplase within 3 to 4.5 hours of the onset of symptoms. In addition to thrombolytic therapy, other interventions are the addition of aspirin within the first 48 hours of stroke onset, prophylaxis for deep-vein thrombosis, high-intensity statin therapy, blood pressure reduction after the acute phase of ischemic stroke has passed, and lifestyle modifications.3,4 Smoking cessation is among the most important behavioral interventions, along with exercise and weight reduction in obese patients. Eligible patients with a large-artery occlusion presenting within 6 hours of symptom onset should receive endovascular thrombectomy.5,6

The use of anticoagulation therapy after an ischemic stroke has been controversial. Long-term anticoagulation was shown to be beneficial as secondary prevention in patients who had chronic nonvalvular atrial fibrillation and who had an ischemic stroke. However, other than the exception of atrial fibrillation, randomized clinical trials have demonstrated that anticoagulation is not more efficacious than antiplatelet therapy.7 The use of anticoagulation therapy within 24 hours of symptom onset was evaluated in the TOAST trial. The results demonstrated that, when compared with placebo, low-molecular-weight-heparin danaparoid use was not correlated with any improved outcome after 3 months. However, a subgroup analysis showed higher rates of positive outcomes in patients treated with anticoagulation who had a large-artery atherosclerotic stroke.8

A cardiovascular surgeon was consulted and deemed that surgery was not indicated. The patient had significant improvement of her left-sided weakness. We strongly advised her to stop smoking. She was discharged to home and instructed to continue physical therapy with home health services. She also was instructed to follow up with her primary care physician with a plan to consider switching to the combination of aspirin and dipyridamole after the 3 months on warfarin.