Staphylococcus aureus is the leading cause of pediatric endocarditis, bone and joint infections, and deep soft-tissue infections. Septic pulmonary embolism is well recognized in association with right-sided bacterial endocarditis, septic thrombophlebitis, and deep soft-tissue infections in adults,1 but it is rare in children.2-4 We report 2 pediatric cases of community-acquired S aureus bacteremia associated with deep soft-tissue and musculoskeletal infection complicated by septic pulmonary emboli. Neither patient showed evidence of right-sided endocarditis or thrombophlebitis. While these cases were clinically similar, they differed in the sensitivity pattern of causative S aureus: one involved methicillin-sensitive S aureus (MSSA) and the other methicillin-resistant S aureus (MRSA).

A 6-year-old boy with an unremarkable medical history presented to the emergency department 5 days after falling and twisting his right ankle. His complaint was pain in the right lower leg and left groin. He looked ill and was febrile, with a temperature of 40.2°C (104.4°F). Physical examination revealed warmth, swelling, redness, and tenderness in the right calf, as well as decreased range of internal rotation and abduction in the left hip. The rest of examination was unremarkable.

Magnetic resonance imaging (MRI) and a 3-phase bone scan (Figure 1) revealed effusion in the left hip joint with adjacent myositis, a large collection of fluid in the right calf, and bone marrow edema in the right tibia. 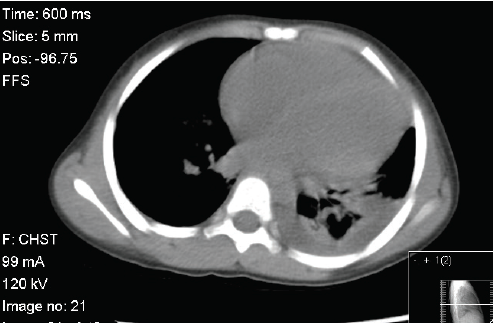 The white blood cell (WBC) count had increased from 21,400/µL to 32,300/µL despite 5 days of treatment with clindamycin and cefazolin. The C-reactive protein (CRP) level was 212.65 mg/L, and the creatine kinase (CK) level was 127 U/L. Blood cultures on the first 3 consecutive days grew MSSA. An echocardiogram revealed minor pericardial effusion but no vegetations. A Doppler ultrasonography study of the right leg was negative for thrombosis.

On day 3, the patient abruptly developed abdominal pain, tachypnea, increased work of breathing, hypoxemia, and rales at the base of the left lung in the absence of cough. Chest radiography showed left lower lobe infiltrate, and computed tomography (CT) of the chest showed consolidation in the left lower lobe, small left-side effusion, and scattered cavitating nodules of less than 1 cm in both lung fields in a fanlike distribution suggestive of septic emboli (Figure 2).

During surgery, 50 mL of pus was drained from the right calf. The tibia showed periosteal elevation but was not drilled. A small amount of pus was drained from the left hip synovial cavity. Surgical drains were placed at both sites. Both intraoperative cultures grew MSSA with the same sensitivity pattern as that of the blood isolates. The left hip was débrided again on day 12 despite antibiotic coverage appropriate to the pathogen’s sensitivity, and an intraoperative synovial culture again grew the same pathogen. The wound drains were removed on postoperative day 2. The fever had resolved on day 21, and the CRP had decreased to 25.26 mg/L on day 34. Treatment included vancomycin for 16 days and cefazolin and clindamycin for a total of 6 weeks. At the follow-up visit 13 months later, the patient was asymptomatic, with full range of motion and no limping. 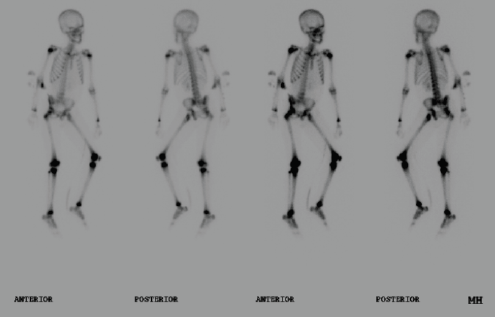 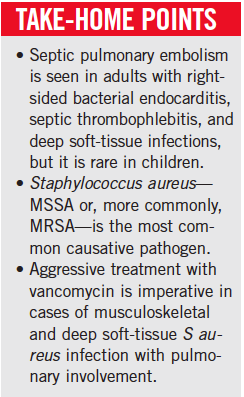 A 9-year-old girl with an unremarkable medical history presented to the emergency department with a 6-day history of left shoulder pain and a 2-day history of fever after having been hit with a fist. At presentation, she was febrile with a temperature of 39.4°C (102.9°F), appeared sick, and had a large area of cellulitis over the left acromial process, with limited range of motion in the left shoulder. No skin break was noted.

On the second day of empiric treatment with cefazolin and clindamycin, the patient developed respiratory distress and hypoxia, with decreased air entry and rales over the left lung field. Chest CT revealed multiple areas of bilateral alveolar consolidation with cavitations (Figures 3A, 3B, and 3C). Doppler ultrasonography of the left shoulder and neck was negative for thrombosis; MRI of the left shoulder showed no bone or joint abnormalities; and an echocardiogram was normal. A blood culture grew MRSA. The WBC count had decreased to 7,400/µL, with 51% neutrophils and 26% bands, and the platelet count was 124 × 103/µL. The prothrombin time and partial thromboplastin time were normal, but the D-dimer level was 4,610 ng/mL.

The patient had required oxygen supplementation via bilevel positive airway pressure respiratory ventilation for 6 days and then had been weaned to room air on day 9. Her fever had resolved on day 8, and she underwent treatment with vancomycin and rifampin for 13 days. She also had received 2 doses of granulocyte colony-stimulating factor. A repeated blood culture was negative. Treatment was completed with oral linezolid. The total duration of treatment was 4 weeks. At a follow-up visit 6 weeks after discharge, the patient was completely asymptomatic. 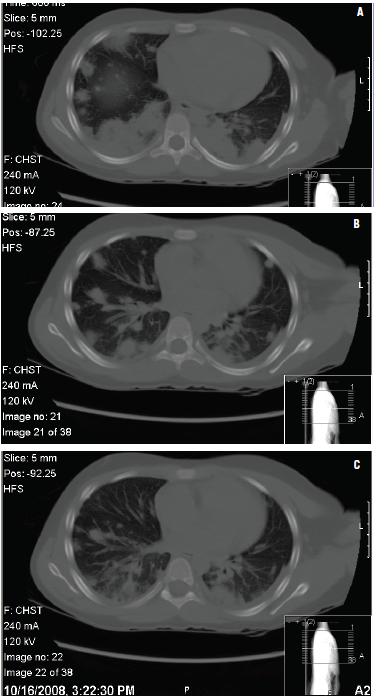 Figures 3A, 3B, and 3C – Chest CT scans of a 9-year-old girl presenting with a fever 6 days after left shoulder trauma show multifocal pulmonary consolidation with cavitations consistent with septic emboli, and subcutaneous cellulitis overlying the left shoulder and extending to the base of the neck.

In both of our patients, infection had developed shortly after trivial mild closed trauma with no skin break—a fall in one case and a contusion sustained by a punch in the other. In both patients, staphylococcal bacteremia with early metastatic foci had developed in the lungs (on day 3 in the first case and on day 2 in the second) with cavitations. Neither patient had evidence of deep venous thrombosis on Doppler ultrasonogram, and neither had positive findings on echocardiogram.

Pulmonary emboli associated with S aureus bacteremia due to infection of the soft tissue, bone, or joint is rare in the pediatric population. In 2 case series, one from Taiwan5 and one from Texas Children’s Hospital in Houston,6 a total of 24 patients aged 7 to 16 years had septic pulmonary emboli with primary S aureus infections (eg, pyomyositis, soft-tissue abscess, septic arthritis, osteomyelitis). Neither of the 2 case series described Doppler studies, and the patients who had echocardiography had no evidence of endocarditis.5,6 The Texas investigators noted that 8 of the 14 children in their study also had sustained mild blunt trauma.

In 2 other reports, both from Turkey, cases of septic pulmonary embolism similarly were associated with previous mild blunt trauma.7,8 In the 2 patients, aged 8 and 15 years, respectively, the primary focuses were cellulitis and septic arthritis, both with S aureus bacteremia. Neither of the patients had a Doppler study for deep venous thrombosis; results of an echocardiogram were normal for one patient8 and not reported for the other.7

One of our patients had infection with MRSA and the other with MSSA. In the reports in the literature cited here, most cases of septic pulmonary emboli were associated with MRSA infection; several of those cases were fatal.6,8 Treatment was successful in both of our patients, and neither had sequelae.

In an era of high prevalence of MRSA in the community, bacteremic S aureus musculoskeletal and deep soft-tissue infection with pulmonary involvement must be treated aggressively with a vancomycin-based antibiotic regimen.