Scurvy in a 4-Year-Old Boy

A 4-year old boy was recently seen at an outside hospital and diagnosed as having a stress fracture of his left femur. The boy also had congenital hydrocephalus, epilepsy, spastic quadriparesis, dysphagia, and developmental delay. He was fed exclusively through a gastrostomy tube with a homemade formula consisting of cooked beef broth, blenderized squash, carrots, and avocado. He was admitted to our facility with fever and fussiness.

Physical examination results revealed that he had right parietal scalp hematomas; swollen, bleeding gingiva; and loose dentition. He was febrile, tachycardic, and tachypneic, and he became agitated when moved, particularly with diaper changes. He also had ecchymoses on both thighs. Radiographs of his femurs revealed osteopenia with metaphyseal excrescences, corner fractures, and peripheral sclerotic epiphyseal rings (Figure). A chest radiograph revealed scorbutic rosary. Based on the radiograph and physical examination results, the patient was diagnosed as having scurvy.

Scurvy, a disease caused by vitamin C deficiency, is rare in developed countries and in the pediatric population. However, children with psychiatric or developmental disorders are at risk for scurvy due to dietary restriction.1 Undersupplied diets lead to rapid development of deficiency because vitamin C is an essential vitamin with a short half-life. Our patient was fed a home-prepared formula that was relatively poor in vitamin C. His parents were unaware that boiling his food would diminish the already low levels of vitamin C.

Vitamin C is a cofactor in collagen synthesis, and vitamin C deficiency prevents self-assembly of collagen molecules into more stable triple helices.2 Unstable collagen is likely responsible for the bleeding gums, brittle bones, impaired wound healing, and intramuscular or subperiosteal hemorrhage found in scurvy.3-5 Follicular hyperkeratosis and perifollicular hemorrhage and coiled hairs are the most specific signs of scurvy. 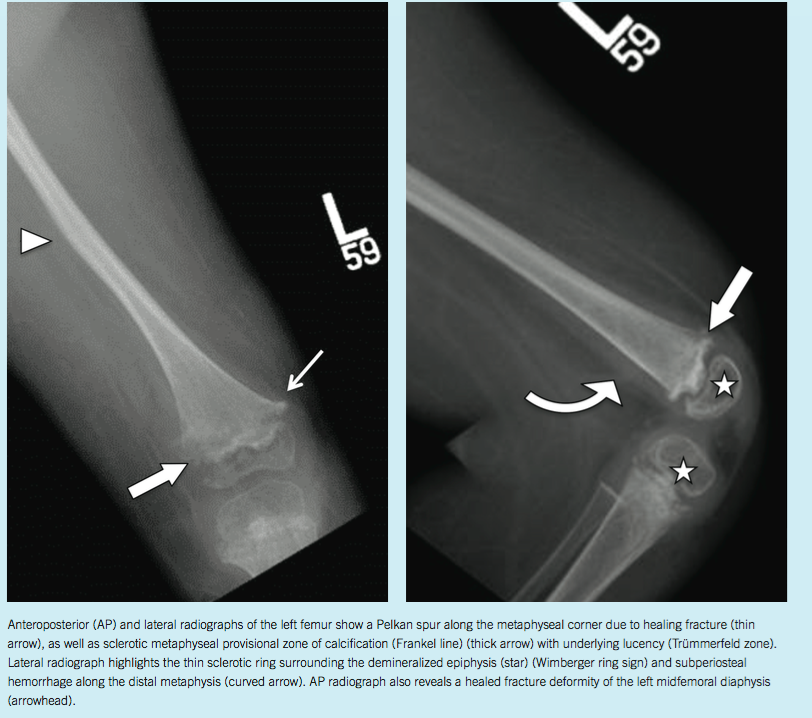 Radiologic manifestations of scurvy are more common in children and are often seen in the long bones around the knee. Radiographic findings include generalized osteopenia with cortical thinning and occasionally pathologic fractures. Subperiosteal hemorrhage often manifests as periosteal reaction or periosteal new bone formation. At the metaphysis, findings include widening and increased density in the provisional zone of calcification (Frankel line), as well as the presence of a lucent line (Trümmerfeld zone) on the diaphyseal side of the Frankel line due to unorganized osteoid.6

Other metaphyseal findings include beaking of the metaphyseal corners (Pelkan spur) from healing fractures as the displaced epiphysis and dense zone of provisional calcification project peripherally beyond the rest of the shaft. In the epiphysis, the Wimberger ring sign reflects a thin sclerotic rim surrounding the demineralized and osteopenic epiphysis. Rounded, knob-like expansion of the costochondral junctions of the first 6 to 8 thoracic ribs is occasionally noted from fracture of the zone of provisional calcification during normal respiration.7,8 This appearance is opposite that of rickets, in which the peripheral ring is lost with relative sparing of central trabecular bone.9

The differential diagnosis of the radiologic findings includes rickets, hematologic malignancies, metastatic diseases such as neuroblastoma, therapeutic drug-induced conditions such as those resulting from antiepileptic medications, and nonaccidental trauma.9

For children, treatment is administration of 100 mg ascorbic acid given orally 3 times daily for 1 week, then once daily for several weeks until the patient has completely recovered. Underlying conditions that led to the vitamin C deficiency should also be addressed.8 Our patient was given an equivalent dose of vitamin C intravenously and made a full recovery. He has since been receiving vitamin C through his gastrostomy tube.