Screen Time and the Sandman

Top Papers Of The Month
Articles You Don't Want To Miss

The sleep duration of young people has declined over the last 100 years, and numerous problems have been linked to this decline, including poor academic performance, a lack of coordination, and increased aggression, hyperactivity, and obesity.1 This decrease in total sleep has been attributed to later bedtimes rather than earlier wake times. Electronic media use immediately before sleep has been hypothesized to affect sleep patterns through time displacement, depression of melatonin, and cognitive arousal.1 This study aimed to describe the most popular activities in the 90-minute period before sleep onset in preadolescents and adolescents. It also examined the relationship between presleep activity and sleep onset, particularly as it relates to electronic media use. 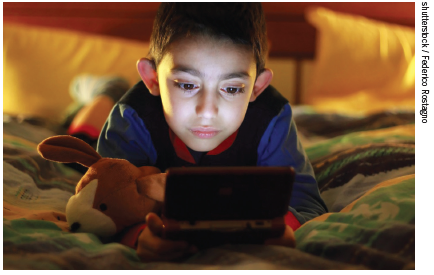 Among the study’s limitations, as noted by the authors, were the following:

•The study had a 45% nonparticipation rate despite having used a large, nationally represented sample.

•The study’s cross-sectional design prevented direct causality from being demonstrated.

•Although self-report tools such as the MARCA have been shown to be psychometrically sound, they can be associated with error due to memory bias or social desirability bias.

•The study focused on time of sleep onset but not on sleep duration.

•The setting of participants’ presleep activity was unknown; the assumption was that the child was at home.