Mr. F is a 78-year-old white man who presented for evaluation of an umbilical hernia. Other than the hernia, the patient felt well and reported no abdominal pain, change in bowel habits, fevers, chills, or weight change. Medical history was significant for coronary artery disease status post stent placement to the left anterior descending artery, hypertension, atrial flutter status post ablation, gout, osteoarthritis of the bilateral hips, and Paget’s disease. Mr. F is a social drinker and has a 40 pack-year smoking history.

On initial presentation, the patient was afebrile and hemodynamically stable. Abdominal examination revealed normal bowel sounds and a reducible umbilical hernia. No masses, tenderness, or guarding were found. A computed tomography (CT) scan of the abdomen and pelvis revealed a mesenteric lesion with spiculated margins. The lesion was centrally calcified and appeared to be engulfing the superior mesenteric vein (SMV) and superior mesenteric artery (SMA), and resembled a metastatic carcinoid tumor versus a desmoid tumor or metastasis from another primary neoplasm. A positron-emission tomography (PET) scan revealed mild-to-moderate metabolic activity of fluorodeoxyglucose (FDG) in the 7×9-cm ill-defined lesion. An Indium-111-labeled octreotide scan was performed, which demonstrated slight-to-mild radiotracer uptake in the midabdomen, corresponding with the region of the ill-defined mesenteric mass, although the intensity of the radiotracer uptake was the same as the adjacent normal bowel and was less intense than what would be expected with a neoplasm such as a carcinoid tumor. An upper gastrointestinal series with small bowel follow-through showed normal-appearing bowel, with normal filling and transit time. There was some subtle tethering of the small bowel loops in the region of the mesenteric mass. Tumor markers, including carcinoembryonic antigen, carbohydrate antigen 19-9, 5-hydroxyindoleacetic acid, and prostate-specific antigen, were all within normal limits. Mr. F underwent exploratory laparotomy, during which a portion of the small bowel was resected and the mesenteric mass was biopsied in multiple areas. Microscopic pathology revealed mesenteric fat necrosis with extensive fibrosis, sclerosing lipogranulomas, and calcifications consistent with a diagnosis of sclerosing mesenteritis (Figure).

Sclerosing mesenteritis is chronic inflammation and fibrosis of the mesentery of unknown etiology. Fewer than 200 cases have been reported in the literature, although this is in part due to the plethora of names given to this poorly understood disease; such nomenclature includes mesenteric lipodystrophy, mesenteric panniculitis, and idiopathic primary inflammation and fibrosis of the mesentery.1,2 Sclerosing mesenteritis is itself non-neoplastic, but it is often associated with an underlying malignancy.

Epidemiology
Previously thought to be a rare condition, approximately 1% of all autopsies reveal sclerosing mesenteritis.3 It has been reported that the median age of diagnosis is 65 years, with most cases presenting during the sixth and seventh decades of life.2,4 For unknown reasons, men are afflicted at at least twice the rate of women.2,4

Causes
The etiology and pathophysiology of sclerosing mesenteritis are not well understood, but some type of inflammatory and/or traumatic mechanism is thought to be the inciting factor for disease development. Some reports suggest that 40% of cases are due to prior abdominal trauma or surgery.4 Patients who are genetically predisposed to poor connective tissue healing following surgery are more likely to develop sclerosing mesenteritis than those with excellent wound healing.

Underlying malignancy is found in 1% to 70% of patients who have received a diagnosis of sclerosing mesenteritis, suggesting that it may be a paraneoplastic syndrome (although the pathogenesis of this phenomenon has not been clearly delineated) or perhaps a nonspecific marker of cancer.2,5,6

Clinical Manifestations
There is a wide variability of patient presentations. The most common symptom is abdominal pain, which is present in 35% to 75% of patients.2,4,7 Change in bowel habits, especially the onset of diarrhea, is also common. Constitutional symptoms such as fevers, chills, and weight loss occur in approximately 25% of patients.4 Occasionally, patients present with a palpable abdominal mass, while some, as in the case patient, are entirely asymptomatic. One recent case report discussed a patient with sclerosing mesenteritis who presented with chylous ascites,8 while another recent case report discussed a case of sclerosing mesenteritis presenting as pneumoperitoneum.7 Onset of symptoms can range from 24 hours to over a decade.2

Diagnosis
Presentation is varied as discussed earlier. Physical examination may reveal a palpable abdominal mass in up to 50% of patients.2 Laboratory tests are nonspecific and vary depending on mode of presentation.

Radiography is usually the most sensitive modality for initial diagnosis of sclerosing mesenteritis. CT scans are the most widely reported imaging studies used for diagnosing sclerosing mesenteritis, and usually reveal a soft tissue mass in the small bowel mesentery. Calcifications and/or lymphadenopathy may be present in approximately 20% of patients, although both of these findings are not specific to sclerosing mesenteritis.9 Perhaps the most specific CT findings are the “fat ring” sign and “tumor pseudocapsule,”9 which have not been reported in other mesenteric diseases such as lymphoma or sarcoma. As with the case patient, there is often extensive vascular involvement, such as vascular displacement, encasement, or thrombosis. Vascular involvement often translates into a poorer prognosis, as the patient’s lesion is unlikely to be surgically resectable.

Tissue biopsy, usually acquired via laparoscopic abdominal surgery, can help confirm the diagnosis. Gross pathology is classified into three types, as reported in a study by Kipfer et al6: type I (42% of cases) is characterized by diffuse mesenteric thickening; type II (32% of cases) shows a single discrete mass; and type III (26% of cases) shows multiple discrete mass lesions. Microscopic pathology for the case patient can be viewed in the Figure. 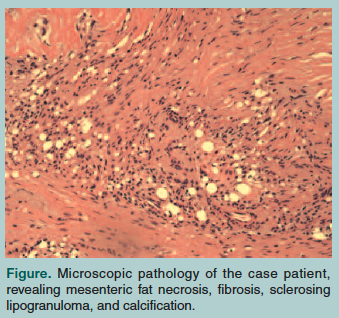 Natural History
Because of the wide array of nomenclature used in the literature, it has been difficult to ascertain the natural course of this disease. Sclerosing mesenteritis generally has an indolent benign course, and there is occasionally spontaneous regression.5 Cases of sclerosing mesenteritis that are associated with underlying malignancy eventually result in cancer-related death. Otherwise, the most likely cause of death is intestinal obstruction.11

Management
Because the etiology and pathogenesis of sclerosing mesenteritis are so obscure, treatment options are varied and a standardized treatment is still unclear at this point. Surgical resection is usually only an option for the one-third of patients with type II sclerosing mesenteritis who present with a discrete mass. Likewise, radiation therapy has a limited role.

Anti-inflammatory medications for the management of sclerosing mesenteritis have been tried in several case reports. Patients who present with inflammatory symptoms such as fevers, malaise, elevated erythrocyte sedimentation rate (ESR), and extensive inflammation on microscopic pathology are most likely to respond to anti-inflammatory agents. Corticosteroids alone and in combination with azathioprine, colchicine, or tamoxifen have been considered4,12,13; cyclophosphamide has been tried in two patients with success.14 One study showed successful maintenance with colchicine after induction with corticosteroids.15 Thalidomide has been tried in five patients, who reported subjective improvement and were found to have decreases in ESR and C-reactive protein after 12 weeks of therapy.16

Hormonal therapy may be considered. Progesterone appears to downregulate fibroblasts and fibrogenesis, although its mechanism is poorly understood. Nonetheless, progesterone therapy has been used with success in one case report.17 Tamoxifen has also been used with some success.18

Mr. F continues to be asymptomatic after his hernia repair and diagnostic laparotomy. Because his disease is multifocal (type III) with local SMA and SMV invasion, surgical removal was not an option. Medical treatment options were discussed, including a trial of steroids or tamoxifen, but the patient has declined treatment until his symptoms progress. He is currently doing well.

Sclerosing mesenteritis is a rare, idiopathic disorder that is characterized by chronic inflammation and fibrosis of the small bowel mesentery. The etiology and pathogenesis of this benign disease are poorly understood. People with this condition often present with vague symptoms such as abdominal pain, diarrhea, fever, chills, or weight loss. Imaging studies and tissue biopsy help confirm the diagnosis. Although there are no standardized treatments for sclerosing mesenteritis, several reports suggest that anti-inflammatory agents, corticosteroids, colchicine, immunosuppressive agents, and/or hormonal therapy are helpful in relieving symptoms.