What Is This Extremely Pruritic Rash With Nighttime Intensity?

An 8-year-old boy presented with an extremely pruritic rash, especially on his distal limbs. The rash was of 6 months’ duration, and it had itched most intensely at night, to the extent that the itching interfered with sleep. The boy was treated with various topical corticosteroids and showed modest improvement. The child was otherwise healthy and had no recent sick contact. There was no personal or family history of atopic dermatitis, but his 12-year-old brother had a similar rash. 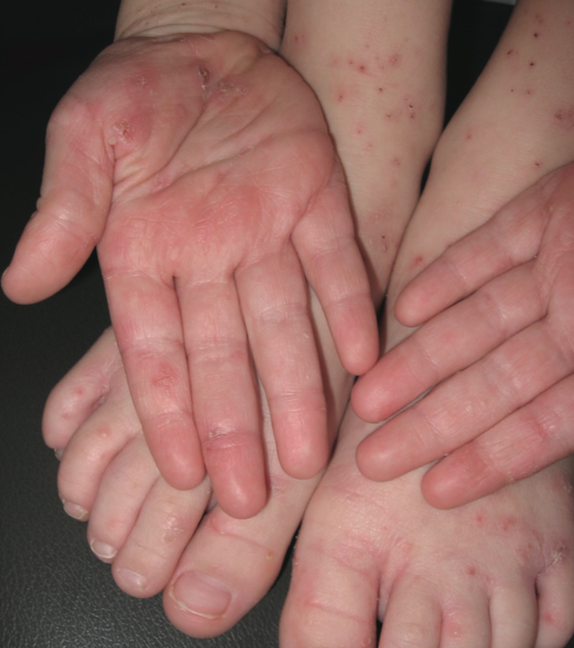 On examination, the child was afebrile and alert. There were  multiple,  erythematous papules and scabs on his hands, wrists, ankles, and feet. The rest of the physical examination results were unremarkable.

Human scabies is a skin infestation caused by the parasite mite Sarcoptes scabiei var hominis that results in an intensely pruritic eruption with a characteristic distribution pattern.1,2 The word “Sarcoptes” is derived from the Greek words “sarx,” which means “flesh,” and “koptein,” which means “to smite or to cut.” The word “scabiei” is derived from the Latin word “scabere,” meaning “to scratch.” The condition was first described by Aristotle as “lice in the flesh.” Scabies is host-specific. As such, mites from animals are not a source of human infestation.1

S scabiei var hominis, an obligate human parasite, has 4 pairs of legs and is tan-brown.3 The organism usually does not survive more than 36 hours off the host, even under optimal conditions.2,4,5

Female mites measure 0.3 × 0.4 mm and are considerably larger than male mites.2,6 Once on human skin, male mites search for unfertilized female mites and die after mating.6,7 Female mites usually live 4 to 6 weeks.6 Fertilized female mites dig tunnel-like burrows in the stratum corneum with their strong mandibles. This process usually takes less than 30 minutes and is facilitated by the secretion of proteolytic enzymes that dissolve the stratum corneum.3,6 Fertilized female mites lay 0 to 4 eggs per day for up to 2 months.7 The eggs are deposited in the burrowed tunnel and hatch in 2 to 4 days.4 The larvae molt 3 times, mature into adults in 10 to 17 days, and emerge onto the skin surface.7 The adult mites then reinfest the host at a different site or infect another host. Mites can crawl at a rate of 2.5 cm/minute on warm skin but cannot fly or jump.1,6,7 Once dislodged, mites use odor and heat to find a new host.

On average, fewer than 10% of the eggs will develop into adult mites.7 The average burden on a normal host is 10 to 12 mites.6 The likely explanations for this number of mites despite so many eggs being laid are mechanical removal of the mites by scratching and host immune response.6

The worldwide prevalence of scabies is around 300 million persons.1,8,9 Community-wide outbreaks have occurred in hospitals, child-care settings, and long-term care facilities.4 Predisposing factors include poverty, overcrowding, homelessness, poor hygiene, malnutrition, reduced access to health care, indiscriminate sexual contact, dementia, and immunodeficiency.4,10 The condition is more prevalent in tropical regions.3 In temperate climates, the incidence is higher in winter than in summer.2,6 Scabies is more common in young children (younger than 2 years) and the elderly.10 There is no gender predilection.6,10

Human-to-human transmission usually occurs after close prolonged skin contact, such as from parents to children.2,8 In young adults, the mode of transmission is usually sexual contact.2,6,8 The risk of transmission increases with the duration and frequency of direct skin-to-skin contact. Rarely, scabies can be transmitted by fomites such as clothing and linens.1,2

Histologic examination of a classic lesion shows Sarcoptes scabiei mites, eggs, and scybala (feces) within the epidermis and eosinophils in the underlying dermis.11

Children become symptomatic 4 to 6 weeks after an initial infestation.3 Symptoms develop in previously infested persons 1 to 3 days after re-exposure to Sarcoptes scabiei.2,4 Scabies is characterized by burrows, erythematous papular eruption, and intense pruritus.3,4 Burrows, which are pathognomonic of the disease, appear as serpiginous grayish, whitish, reddish, or brownish lines several millimeters long in the upper epidermis.3,7 Sites of predilection include the interdigital web spaces, flexor aspects of the wrists, lateral aspects of the fingers, extensor surfaces of the elbows, axillae, belt line, thighs, navel, abdomen, buttocks, genitalia in males, and periareolar area in postpubertal females.3-5,9 The back is rarely involved, and the head and neck are usually spared, except in very young children and immunocompromised individuals.2,6 However, in infants and toddlers, lesions may occur in areas usually spared in older children and adults, such as the scalp, face, neck, and palmoplantar skin.7,12

The pruritus is usually generalized, intense, and intractable with nocturnal predominance.1,10 Itching of scabies results from a delayed type IV hypersensitivity reaction to the mite, its saliva, eggs, or scybala.2,13 Papules caused by a hypersensitivity reaction to the mite are erythematous, and usually 1 to 2 mm in diameter.3 Some of the papules are excoriated, crusted, or scaling.3 In children younger than 2 years, the eruption may be vesicular or papulopustulovesicular.3

Nodular scabies, a clinical variant, is characterized by pruritic reddish to brown nodules that persist even after treatment of scabies.14 Sites of predilection include the elbows, axillae, penis, scrotum, groin, and buttocks. These nodules do not contain mites and do not necessarily indicate active infestation.6,7 Rather, they represent a hypersensitivity reaction to retained mite parts.7,14

Crusted scabies, also known as Norwegian scabies, is a highly contagious variant of scabies characterized by profuse proliferation of mites in the skin and widespread, crusted, hyperkeratotic papules, plaques, and nodules.4,15 Itch may be absent or minimal.2,4 Predisposing factors include physical debilitation, malnutrition, mental retardation, and immunodeficiency.4,15

Bullous scabies, another clinical variant, occurs mainly in the elderly population.9,10 The condition is characterized by a bullous eruption accompanied by papules with nocturnal itching. It mimics bullous pemphigoid clinically.6 Sites of predilection include the trunk and extremities.10

The diagnosis can be made on the basis of the history (eg, severe pruritus with nocturnal exacerbation, concurrent infestation among family members and close contacts) and clinical findings (eg, skin burrows, erythematous papules in characteristic locations). Finding the mite, ova, or fecal pellets on microscopic examination of scrapings taken from lesions with a scalpel or curette confirms the diagnosis.3 Mineral oil applied to the skin facilitates collection of scrapings. Repeated tests in different areas are often needed for a conclusive diagnosis.5 Since an average of 10 to 12 female mites live on a infested host, failure to find a mite is common and does not rule out a diagnosis of scabies.7,16,17

An alternative method to microscopy is the burrow ink test.7 Dermoscopy is also a valid tool for diagnosing scabies.5,11 The dermoscopic pattern of scabies consists of small dark-brown triangular structures (“delta wing jet” sign) located at the end of whitish, structureless, wavy lines, which corresponds to the pigmented anterior part of the mite and the burrow, respectively.11 Other noninvasive techniques for scabies diagnosis include videodermoscopy, reflectance confocal microscopy, and optical coherence tomography.5 Referral to a dermatologist should be considered for any rash where the diagnosis is unclear.

Scratching can lead to secondary bacterial infection, including impetigo and cellulitis by Staphylococcus aureus or group A streptococci.4,7 Poststreptococcal glomerulonephritis and potentially rheumatic heart disease may follow group A streptococcal infection.4.17,18 Scratching may lead to excoriation and also increase the severity of existing skin conditions, such as atopic dermatitis and psoriasis. Itching may lead to sleep disturbance, reduced ability to concentrate, somnolence, and tiredness.18 The disease can also lead to stigmatization and depression and can have an adverse effect on the quality of life.4,17,19

The drug of choice for the treatment of scabies is 5% permethrin cream, which has a 95% to 98% success rate when used appropriately.1,4,8 The cream should be applied overnight and washed off 8 to 12 hours after application and the process repeated 7 to 10 days later. Topical permethrin has an excellent record of safety and low toxicity and is well tolerated.8 Oral ivermectin, 200 µg/kg as a single dose to be repeated after 1 to 2 weeks, is a reasonable alternative.2,4,8,16 However, the medication is not approved for use in children under the age of 5 years or in women who are pregnant or breastfeeding.4,17

Other treatment options include topical application of 10% to 25% benzyl benzoate, 10% crotamiton, 1% ivermectin, 1% lindane, 0.5% malathion, and 8% to 10% sulfur in petrolatum.2,8,16 Simultaneous treatment of all close contacts, even if asymptomatic, is important to avoid transmission and reinfestation.1,4,7 Oral antihistamines can be used to alleviate pruritus.4,20 Clothes and bed linen used within several days before treatment and until the treatment course is completed should be machine washed with hot water and dried to minimize transmission of the disease.2

Scabies is still a major public health and endemic problem in many developing countries.16 A recent study showed that mass drug administration, particularly the administration of oral ivermectin, is an important strategy for scabies control in countries where the disease is endemic.7,18 Mass drug treatment should also be considered in community-wide or institutional outbreaks.4

The prognosis is excellent with proper treatment unless the patient is immunocompromised or institutionalized. Most recurrences are the result of reinfestation from untreated contacts. n

Alexander K.C. Leung, MD, is a clinical professor of pediatrics at the University of Calgary and pediatric consultant at the Alberta Children’s Hospital in Calgary, Alberta, Canada.

Kam-Lun Ellis Hon, MD, is a professor of pediatrics at the Chinese University of Hong Kong in Hong Kong.