A 55-year-old man with a history of pulmonary sarcoidosis presents to the dermatology clinic with “spots” on his neck that started in 1991 (Figure 1). Initially, these spots were only on his neck but they have spread to his trunk and arms. The areas are nonpainful and nonpruritic. He has not tried any medications. He denies any cough, shortness of breath, eye, chest, or bone pain. He has a history of pulmonary sarcoidosis that has resolved according to his most recent chest x-ray. Physical examination demonstrates several 2 cm to 12 cm well-demarcated hypopigmented firm plaques on the nape of his neck, upper posterior arms and lower trunk. His face and scalp are spared. A punch biopsy showed histology consistent with sarcoidosis and the patient was prescribed fluocinonide 0.05% cream to apply twice daily to the affected areas. He was referred to ophthalmology for a baseline eye exam, which was within normal limits. At 4 months of follow-up, his plaques were 50% thinner but persistently hypopigmented.

Discussion. Sarcoidosis is a noninfectious granulomatous disease that involves the skin and other internal organs. The course can be acute or chronic. It was first described in 1875 by Sir Jonathan Hutchinson and cutaneous sarcoidosis in 1889 by Besnier.1 In addition to the skin, which is affected in roughly 1 out of 4 cases, other sites include the lungs, mediastinal lymph nodes, kidney, phalangeal bones, myocardium, and CNS.2 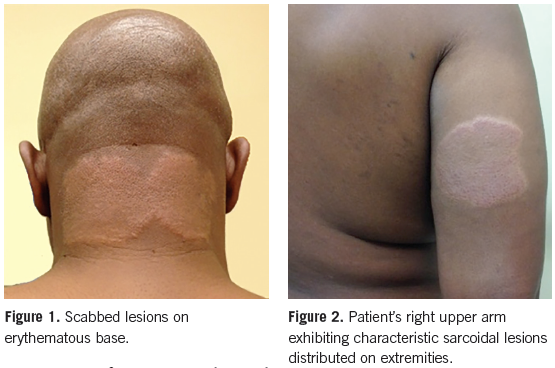 Cutaneous involvement occurs in up to 25% to 30% of patients who have systemic sarcoidosis and in some instances is the initial manifestation of the disease.4 Skin findings can also provide clues to prognosis, clinical course, and guide therapeutic decision-making. Although the relationship between cutaneous findings and systemic disease has not been fully elucidated, studies have suggested associations between specific lesions and various organ involvement or disease course. For example, papular sarcoidosis is often an acute form of sarcoidosis that disappears within 2 years, while the plaque variant is associated with a chronic course and extra-thoracic involvement.4 By identifying the variant of cutaneous sarcoidosis, dermatologists can determine which tests are necessary to diagnose potential extracutaneous involvement.

Clinical presentation. Sarcoidal skin findings are typically divided into 2 categories: those specific to sarcoidosis that are marked by granulomatous infiltrates in the skin and the nonspecific lesions that result from the systemic immune response.4 Specific sarcoidal lesions often appear as violaceous to reddish brown flat-topped papules or plaques that are distributed symmetrically on the face, neck, upper trunk, and extremities (Figures 1 and 2).4 Diascopy may reveal a yellow to brown or apple-jelly color. This is more easily appreciated on plaques and papules in patients with lighter skin color.5 Sarcoidal lesions may also occur in preexisting scars or sites of prior trauma. For example, old tattoos and areas with foreign body material tend to become infiltrated by characteristic sarcoidal granulomas.5 Typically, the skin lesions lack secondary change but occasionally scale or ulcerations can occur. Other less encountered varieties of cutaneous sarcoidosis include psoriasiform, hypopigmented, lichenoid, ichthyosiform, ulcerative, and subcutaneous.2

Darier-Roussy disease and lupus pernio are other variants of sarcoidosis that have specific cutaneous findings. In Darier-Roussy sarcoidosis, the disease is limited to the subcutaneous tissue and patients can have multiple asymptomatic to slightly tender, firm nodules without epidermal change that are most commonly found on the extremities.5 Lupus pernio presents with papulonodules and plaques along the nose, ears, lips, and cheeks and should be recognized early because in 75% of cases it is accompanied by chronic fibrotic sarcoidosis of the upper respiratory tract and lungs.3,5

Erythema nodosum (EN) is the most common nonspecific skin finding in sarcoidosis and develops in up to 25% of cases. Histologically, EN lacks sarcoidal granulomas. EN has been shown to have prognostic significance in sarcoidosis and is associated with subacute or transient disease that usually does not require therapy.4 Conversely, when EN is absent, patients are at an increased risk of chronic disease.1 EN manifests as red, warm, tender nodules on the anterior shins and is seen most frequently in young women. When EN is associated with hilar adenopathy, fever, polyarthralgias, uveitis, and fatigue, the constellation of symptoms is referred to as Löfgren syndrome. Recent genetic studies have noted certain HLA-DRB1 alleles that affect disease prognosis in patients with Löfgren syndrome. For example, DRB1*03 positive patients are more likely to have spontaneous resolution compared to DRB1*03 negative patients.6 Löfgren syndrome typically has a benign and self-limiting course. In fact, more than 80% of patients will have spontaneous remission within 2 years.4

Systemic manifestations include lung disease that occurs in 90% of cases of sarcoidosis, which can ultimately lead to fibrosis and bronchiolectasis of the lung parenchyma. Granulomatous inflammation can also affect the eyes in 10% to 50% of cases and the heart in 5% of cases.7 These changes in the myocardium can cause significant morbidity and mortality. Thus, patients should undergo routine ophthalmologic examinations and an electrocardiogram to identify any arrhythmias or ventricle dysfunction. In addition, other sites of involvement include the liver, CNS, kidney, and spleen.7

Histopathology. The histology of sarcoidosis is similar in all affected tissues and has the characteristic finding of superficial and deep dermal epitheloid cell noncaseating granulomas comprised of mononuclear histiocytes that lack a lymphocytic or plasma cell infiltrate. These are referred to as naked granulomas.3,4 The granulomas have pale staining nuclei because the growth of the chromatin is slower than the growth of the cytoplasm.8 Lymphocytes are usually confined to the periphery. Occasionally, fibrinoid necrosis can be seen in locations where multiple granulomas have coalesced and can be distinguished from caseation because of its fine reticulin pattern on silver stain.8 Schaumann and asteroid bodies can be found within the giant cells, but these are not specific to sarcoidosis.5 When pathology shows the presence of naked granulomas, dermatologists should also consider the potential for foreign-body granuloma or tuberculoid leprosy, both of which can have naked granulomas. However, with foreign-body granuloma, polarized light may reveal birefringent foreign material in giant cells while in tuberculoid leprosy, an acid-fast stain should reveal acid-fast bacilli.9

Pathogenesis. Although the underlying cause of sarcoidosis is still unknown, it likely results from a complex interaction of genetics, immune response and environmental exposure which leads to disease in a susceptible person.3 There have been studies that support familial clustering due to increased prevalence among siblings and first-degree relatives.10 For example, one Scandinavian study reported an 80-fold increase in the risk of developing sarcoidosis in an unaffected monozygotic twin versus only a 7-fold increase in risk for a dizygotic twin.10

In susceptible individuals, there is likely an interplay between extrinsic antigens and the immune response, which leads to the development and progression of the disease. The antigenic trigger is unknown, but studies suggest it may be due to a persistent infectious organism or to an environmental agent.4 One study of a population of Greek patients with sarcoidosis found Mycobacterium tuberculosis and Propionibacterium granulosum DNA in sarcoidal tissue, supporting the potential for an infectious trigger.11 From an environmental perspective, an increased risk has been seen with exposure to pesticides, insecticides, mold, and combustible wood. Occupational exposure to aluminum, talc, beryllium, and zirconium may also contribute to an increased risk of sarcoidosis.4,12 As both infectious and noninfectious agents have been associated with sarcoidosis, much depends on the interplay between an external trigger and the makeup of an individual’s immune system.4

The cell-mediated immune system is responsible for causing sarcoidal granulomas to develop in various organs. The cell-mediated pathway is hyperactive and upregulates the activity of CD4 T-helper cells.  TH1 cells, specifically, lead to the formation of epitheloid granulomas in different tissues. Both the innate and adaptive systems release cytokines that further the proliferation of sarcoidal granulomas and are comprised of both macrophages and CD4 T-helper cells. The accumulation of these granulomas affects the function of the organ, which ultimately leads to signs and symptoms of the disease.3

Differential diagnosis. Cutaneous sarcoidosis has been referred to as the great imitator because it can present with a large number of different morphologies.5 Papular sarcoidosis can mimic xanthelasma, syringomas, adenoma sebaceum, granulomatous rosacea, granuloma annulare, and certain lichenoid conditions. When the lupus pernio variant is encountered, the differential can include lupus erythematous, rhinophyma, lupus vulgaris, and certain deep fungal infections.5 The differential diagnosis for hypopigmented lesions includes postinflammatory hypopigmentation, pityriasis versicolor, leprosy, vitiligo, idiopathic guttate hypomelanosis, and mycosis fungoides. Furthermore, when pathology reveals sarcoidal granulomas on biopsy, it is necessary to rule out foreign body, infection, and drug eruption. The latter 2 possibilities are particularly important to exclude as early intervention leads to improved outcome.

The diagnosis of sarcoidosis is 1 of exclusion that relies on epidemiological, clinical, radiographic, laboratory, and histopathological findings.5 Hilar and mediastinal lymph node enlargement and pulmonary infiltrates can be seen on chest x-ray.7 Additionally, pulmonary function testing often shows evidence of restrictive lung disease with a reduced forced vital capacity and forced expiratory volume. Laboratory analysis may show lymphopenia, leukopenia, elevated erythrocyte sedimentation rate in 40% of cases, and hypercalcemia in 11% of cases.13 Moreover, hypercalciuria is observed in 40% of patients and renal calculi in 10%. Thus, it is important to measure a 24-hour urinary excretion of calcium since intrarenal deposition can cause renal failure.13

Roughly 30% of patients have an elevated antinuclear antibody titer and serum angiotensin-converting enzyme (ACE) is increased in 60% of cases.13 Interestingly, ACE activity was noted to be elevated in patients with active pulmonary sarcoidosis, while those receiving steroid therapy or with resolved disease had normal levels.14 In addition, levels are higher in those with extra-thoracic disease and multisystem organ involvement.15 This suggests that monitoring ACE levels can help gauge disease activity and an adequate response to therapy.14,15

Treatment. Treatment for cutaneous sarcoidosis is recommended when the lesions are disfiguring, cosmetically distressing, or symptomatic.4 The first-line therapy for localized or mild sarcoidosis of only the skin is a high-potency topical steroid applied twice weekly, or intralesional
steroid injections every 3 to 4 weeks.4 When mild disease persists, antimalarials such as hydroxychloroquine or chloroquine can be added.3 Systemic corticosteroids are the preferred treatment for generalized or rapidly progressing skin disease that is unresponsive to topical steroids. The course typically consists of oral prednisone 20 mg to 60 mg daily for 1 to 3 months until improvement. The dose is then tapered by 5 mg to 10 mg on alternate days until the lowest dose can be achieved that prevents relapse.4

Additional treatment agents include methotrexate, minocycline, thalidomide, isotretinoin, and allopurinol. These can all be used as monotherapy or used along with corticosteroids to facilitate tapering.4 Finally, evidence has shown that tumor necrosis factor-alpha inhibitors like infliximab, have been efficacious in treating severe recalcitrant cutaneous sarcoidosis such as the lupus pernio variant. However, infection is a major concern when using infliximab as there have been increased cases of tuberculosis reported in patients on infliximab versus those treated with other biologics such as etanercept.8

This case was originally published in the February 2015 issue of The Dermatologist.