A 17-year-old male presented to the emergency department (ED) with a complaint of back, chest, and right hip pain of 6 weeks’ duration, as well as severe acne that was refractory treatment.

Several months ago, his pediatrician had prescribed oral medication for the acne, but the patient recently had become nonadherent secondary to a lack of improvement. Approximately 6 weeks prior to presentation, he developed right hip pain that occurred intermittently, without radiation. Chest and back pain followed 2 weeks later, which he described as a sharp, pressure pain that occurred intermittently in varying locations over the chest and back and was worsened by movement, laughing, or coughing. Over-the-counter pain medication provided only mild relief.

In the ED, the patient’s vital signs were within normal limits. Physical examination findings included severe acne lesions, many cystic in nature, throughout the upper back (A) but with minimal involvement of the face. Mild right hip pain was elicited with both passive and active movement of the hip joint. There was no costovertebral angle tenderness and no tenderness to palpation along the spinous processes or paraspinous musculature. 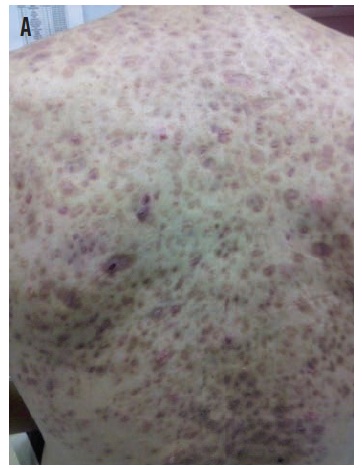 On laboratory evaluation, results of a complete blood count, a comprehensive metabolic panel and urinalysis, were normal. Creatine kinase, lactate dehydrogenase, and uric acid levels were within normal limits. The C-reactive protein level was elevated at 4.1 mg/L, and the erythrocyte sedimentation rate was elevated at 38 mm/h. Results of hip ultrasound and chest radiographs were normal. Infectious disease was consulted in the ED and recommended the patient be admitted for further testing.

Upon admission, the patient complained of left clavicular pain, prompting a radiograph, which was negative for clavicle abnormalities. Bilateral shoulder radiographs revealed a small incidental bone island on the left acromion, suggestive of hyperostosis. Magnetic resonance imaging (MRI) of the thoracic/lumbar spine and pelvis revealed abnormal signal and faint enhancement of vertebrae T3 through T5, T7, L5, and S1, and the right sacroiliac joint, suggestive of generalized osteitis (B). Additionally, lesions were noted within the subcutaneous fat due to severe acne over the patient’s back. 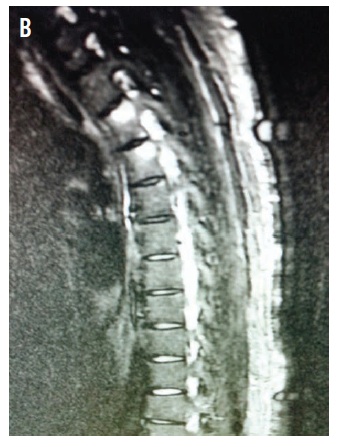 After receiving a diagnosis of SAPHO (synovitis, acne, pustulosis, hyperostosis, and osteitis) syndrome, the patient remained hospitalized for 2 days, during which he was maintained on moxifloxacin and pain control medication. Viral studies all were negative. Upon resolution of his pain, the patient was discharged with a regimen of bisphosphonates, naproxen, and ranitidine and was instructed to follow up with infectious disease and dermatology.

SAPHO syndrome, first described in 1987 by Chamot and colleagues,1 describes a constellation of symptoms and physical examination and imaging findings encompassing synovitis, acne (mostly on the upper back), pustulosis (usually on the palms or soles), hyperostosis, and osteitis. The patient in our case presented with synovitis of the right hip, acne of the upper back, hyperostosis at the left shoulder, and osteitis of several vertebrae.

Dermatologic findings can appear years after the skeletal findings2; as such, the absence of acne or pustulosis does not rule out SAPHO syndrome. The acne usually presents as severely cystic or pustular in nature,2 and subcutaneous fat involvement has been noted, as in our case. Diagnosis must include imaging such as radiography, computed tomography, and MRI to identify the myriad of skeletal pathologies. In a recent retrospective evaluation, Laredo et al determined that in MRI studies of patients with SAPHO syndrome, vertebral corner cortical erosion was present in all lesions, and 96% of lesions had anterior vertebral involvement.3 The location of bony involvement can vary significantly, with the long bones, clavicle, and spine being the most affected areas in the pediatric population.4

The inciting pathogen for SAPHO syndrome remains a mystery, although Propionibacterium acnes has been isolated in bone biopsy specimens,5 and Staphylococcus aureus has been isolated from plantar pustules.6 Given that acne might be the only superficial presentation, many patients are treated with antibiotics for prolonged periods without resolution of symptoms.

Bisphosphonates are the first-line treatment option,7 with several studies focusing on pamidronate.8 Several other therapies have been attempted, including monoclonal antibodies targeting tumor necrosis factor α,9 corticosteroids, and anti-inflammatory drugs.