Her mother reported that the mass had been growing at a slow pace and was not associated with any pain or weakness of the lower extremities.

The girl’s developmental milestones were normal, and she had normal bladder and bowel control. Her past medical history was otherwise noncontributory. Physical examination findings were unremarkable except for the swelling. 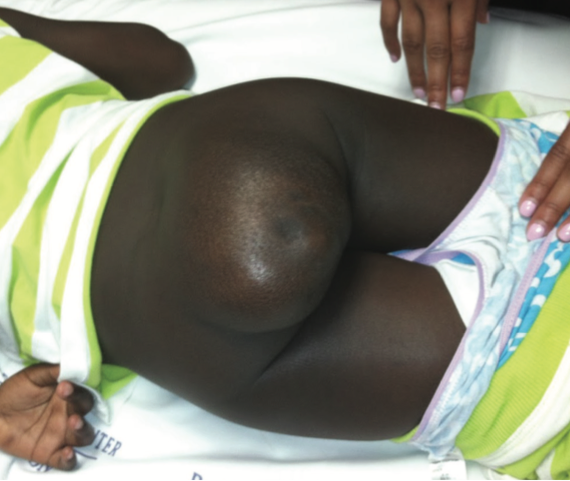 The patient had to be transferred to the regional children’s hospital due to the unavailability of a pediatric neurosurgeon and a pediatric oncologist.

A follow-up call to the referral institution revealed that the diagnosis initially had been made with magnetic resonance imaging (MRI) of the spine, which had revealed a predominantly cystic tumor with no pelvic extension. After surgical excision, the diagnosis was confirmed as benign cystic sacrococcygeal teratoma (SCT). The patient had the tumor surgically excised via the posterior approach with sparing of the sacrum and coccyx. No follow-up information could be obtained.

Developmental/congenital masses are the most frequent category, with teratomas and anterior spinal meningoceles accounting for the majority. SCT is the most commonly recognized fetal neoplasm and the most common germ cell tumor, with an estimated prevalence of approximately 1 in 27,000.2 The female to male ratio is 4:1. Most SCTs manifest as presacral masses, with most (80%) diagnosed before the age of 6 months. Diagnosis at an older age is associated with an increased prevalence of malignancy.3 Anterior spinal meningocele is a congenital abnormality that arises from herniation of the cerebrospinal fluid–filled dura mater through a defect in the sacral bone. It usually presents in the first decade of life with symptoms related to mass effect, neurologic compromise, meningitis, or rupture. Neuroblastoma is the most common neoplasm of infancy; however, only 2% to 3% are found in the pelvis/sacral region.4 Only 1% to 5% of spinal schwannomas originate in the sacrum. Pelvic abscesses may be secondary to complicated appendicitis, inflammatory bowel disease, or postoperative complications. Rhabdomyosarcoma is an aggressive cancer, accounting for 4% to 8% of all pediatric malignancies. Less than 5% of rhabdomyosarcomas originate from nongenitourinary pelvic sites. Presentation of non-Hodgkin lymphoma with an isolated presacral mass is rare. Primary bone tumors and sacral metastasis are very uncommon.5 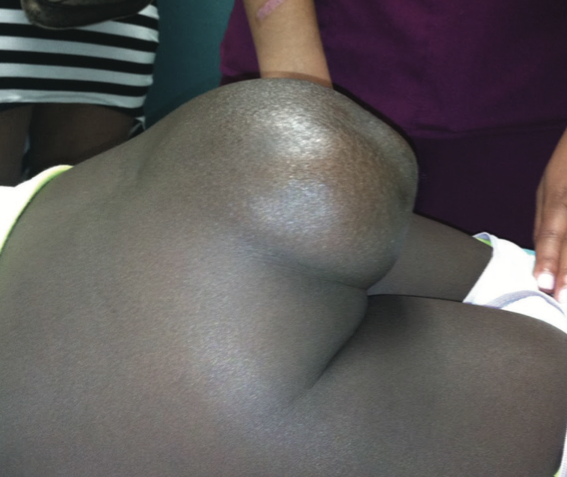 Imaging is important in the diagnosis and management of children presenting with sacral masses. Ultrasonography, computed tomography, and MRI are usually performed alone or in combination6,7 to obtain superior anatomic and tissue delineation, including extension to surrounding organs and tissues.