He had a history of sickle cell trait, and his immunizations were current. His physical examination was only remarkable for an isolated pea-sized nontender, mobile, left-sided posterior cervical lymph node. Over the next week, he developed subjective fevers and swelling of the node. He was admitted for treatment of lymphadenitis. Antibiotics and steroids were given, and after 3 days he was discharged home to complete a 10-day course of oral clindamycin. However, he returned to  the clinic the following day with continued fever and vomiting after each dose of clindamycin. On examination, the node was larger, warm, and tender. The boy was readmitted.

Laboratory testing results revealed a white blood cell count of 16.45 × 103 cells/mL, a low hemoglobin count of 10.3 g/dL, a platelet count of 635 × 103 /mL, an elevated erythrocyte sedimentation rate of 79 mm/h, and C-reactive protein level of 24.4 mg/dL. The peripheral smear test results suggested iron deficiency anemia, but no hematologic malignancy was suspected. Tests for Bartonella, cytomegalovirus, Epstein-Barr virus, HIV, tuberculosis (T-SPOT.TB and purified protein derivative), and Toxoplasmosis gondii were negative, as were aerobic and anaerobic blood cultures. Levels of immunoglobulins A, G, and M were elevated, suggesting polyclonal hypergammaglobulinemia. The patient’s chest radiograph results were unremarkable, and a computed tomography scan of the neck showed a conglomerate of left-sided posterior cervical lymphadenopathy. An incisional biopsy was performed to obtain further information. The differential diagnosis for cervical adenitis is listed in Table 1.1

Biopsy results showed marked sinusoidal dilatation with S100 positive histiocytes with lymphophagocytosis/emperipolesis (penetration of one cell by another, both of which remain intact), classic findings in Rosai-Dorfman disease. As a result, hematology-oncology consultants recommended treatment with clofarabine (a purine nucleoside antimetabolite), given as daily infusions for 5 consecutive days per month for 6 months. On a follow-up visit after his first round of chemotherapy, the patient was afebrile, but the node had doubled in size (Figure 1). 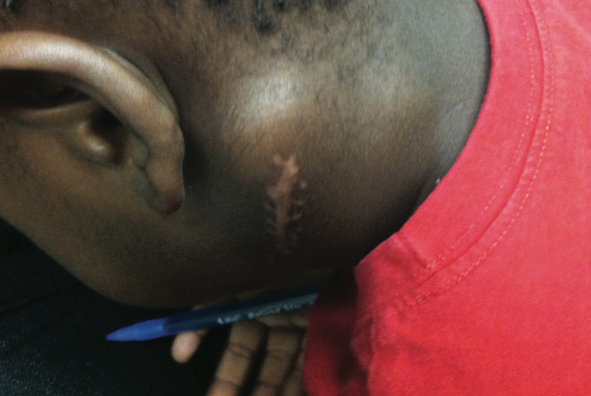 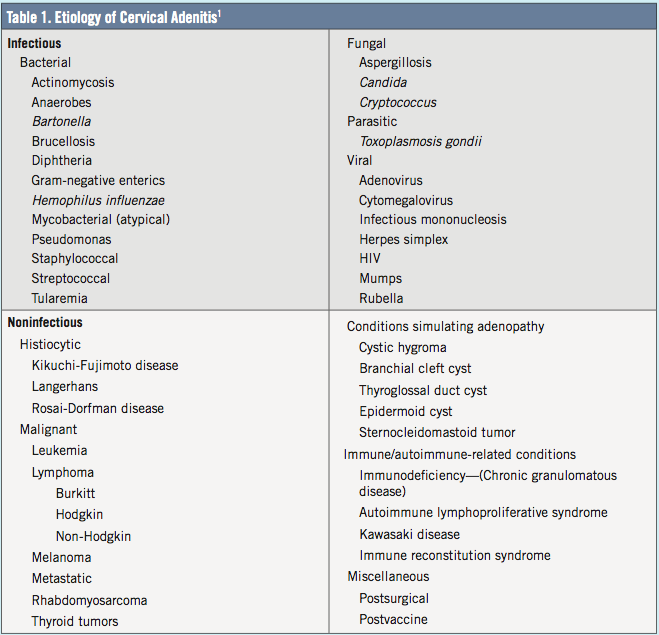 Rosai-Dorfman disease, also known as sinus histiocytosis with massive lymphadenopathy (SHML), is a rare, benign, histiocytic disorder of unknown origin. It is more common during the first 10 years of life, is equally common in persons of African and Caucasian descent, and has a slight male predilection.1 Clinically, adenopathy progresses over 3 to 9 months, and fever, night sweats, and weight loss may occur. Our patient was unusual in that the adenopathy progressed quickly over 1 week. Pathologically, the disease is characterized by proliferation of the non-Langerhans sinus histiocyte within the lymph node sinuses and lymphatics in extranodal sites.2 Comparison to Langerhans cell histiocytosis in shown in Table 2.3 In Rosai-Dorfman disease the cells accumulate in the lymph nodes, but extranodal enlargement can occur and lead to organ damage.4

The prevalence of the disease is unknown, but almost 1000 cases have been reported to the SHML Registry. Because it is so rare, no large studies have been done, and there is no established treatment. Due to the benign nature of Rosai-Dorfman disease, some recommend close observation; the adenopathy usually regresses between 2 months and 14 years, averaging 3.6 years to resolution.2 Other options include immune-modulating therapy such as interferon-α, 2-chlorodeoxyadenosine, imatinib, and rituximab. Surgical excision, radiation, and chemotherapy are also treatment options.5,6

Lynnette Mazur, MD, MPH, is a professor of pediatrics at the John P. and Kathrine G. McGovern Medical School at University of Texas Health Science Center in Houston.

Nourhan Ismaeel, BS, is from the John P. and Kathrine G. McGovern Medical School at University of Texas Health Science Center in Houston.

Susan Pacheco, MD, is an associate professor at the John P. and Kathrine G. McGovern Medical School at University of Texas Health Science Center in Houston.