A 6-year-old girl presented to the emergency department (ED) with a chief concern of altered mental status. The girl had had an episode of vomiting and had been found on the floor, unresponsive, with an upward gaze and her head shaking. She had a 4-day history of fever, rhinorrhea, decreased activity and appetite, intermittent vomiting, and right-sided abdominal pain. Her parents denied limb shaking, rashes, headache, and dizziness in the girl.

Upon presentation in the ED, the patient was afebrile, tachycardic, and unresponsive, with a right-sided fixed gaze. Neurologic exam was limited, but the rest of the physical examination findings were unremarkable. The girl had experienced a generalized tonic-clonic seizure, which required several doses of lorazepam and fosphenytoin to break.

The girl was admitted to the pediatric intensive care unit and was started on a regimen of broad-spectrum intravenous antibiotics and acyclovir. She later developed visual hallucinations. Magnetic resonance imaging (MRI) of the brain (A and B) showed diffuse, abnormal leptomeningeal enhancement suggesting meningitis or encephalitis. No intracranial masses were noted on MRI. Electroencephalography results showed signs of encephalitis. 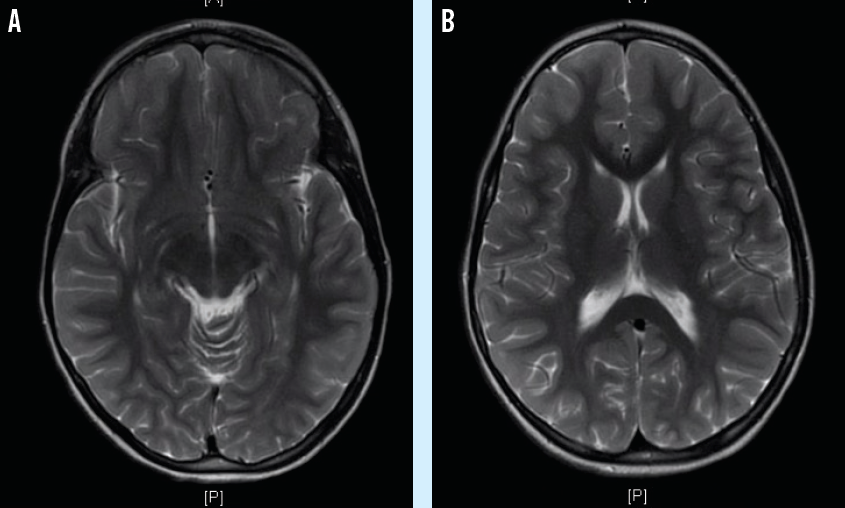 After 3 days, her mental status began to improve, but she continued to spike fevers and complain of hallucinations. The leukocytosis worsened despite the antibiotics. Results of blood, urine, and CSF cultures were found to be negative. An infectious disease specialist was consulted, and the antibiotic regimen was adjusted. A follow-up lumbar puncture was done for CSF analysis, which showed that the leukocytosis had improved.

The infectious disease workup showed positive results for Rickettsia IgM (spotted fever ratio of 1:128) and negative results for IgG. On further questioning, the family denied a history of tick bites, recent travel, or rashes in the girl. However, the parents stated that they have several pets (dogs, ducks, and rabbits). The patient received a diagnosis of meningoencephalitis secondary to Rocky Mountain spotted fever (RMSF) without the typical rash.

The girl was started on a regimen of doxycycline. The fevers resolved, and she did not experience further seizures or hallucinations. She was discharged after 22 days, instructed to complete a 21-day course of doxycycline, and started on phenytoin.

The patient was readmitted to the hospital 17 days following discharge due to her having developed ataxia and abnormal speech. MRI of the brain showed acute disseminated encephalomyelitis. She was treated with high-dose intravenous corticosteroids, after which the symptoms resolved.

RMSF is an infectious disease caused by Rickettsia rickettsii bacteria, which are transmitted to humans through tick bites. In the United States, RMSF is the most lethal and most frequently reported infectious disease caused by R rickettsii. RMSF is transmitted by the American dog tick, the Rocky Mountain wood tick, and the brown dog tick.1 The disease is spread via the lymphatic system and causes vasculitis. Symptoms typically appear 2 to 14 days after a tick bite.

Characteristic features of RMSF include sudden-onset fever, headache, vomiting, and myalgia.2 In 90% of patients, a characteristic maculopapular rash develops 2 to 5 days after the onset of fever, originating on the wrists and ankles and spreading inward.3 Other symptoms may develop later, including abdominal pain, diarrhea, and joint pain.

The first-line treatment of RMSF in children is doxycycline, despite the medication’s possible adverse effects. Because of its effects on the central nervous system, the respiratory system, the gastrointestinal system, and the renal system, RMSF can be severe or fatal if it is not treated within the first few days after symptoms develop.4