Reversible, Chronic Homonymous Hemianopia Due to a Suprasellar Arachnoid Cyst in an Elderly Patient 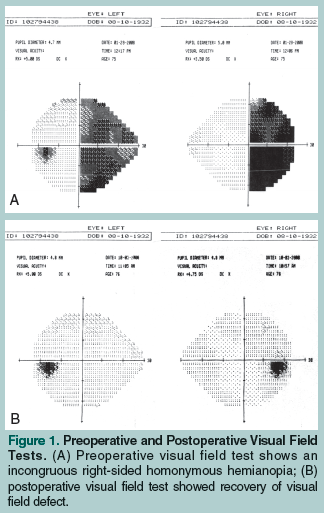 Arachnoid cysts, nontumorous intra-arachnoid fluid collections, account for about 1% of all intracranial space-occupying lesions,1-4 and have an incidence of 0.1% to 0.7% in autopsy studies.3 Nine percent of arachnoid cysts occur in the sellar or suprasellar region,5 and the initial clinical features typically include bitemporal hemianopic field defects and pituitary gland dysfunction.6 These cysts are regarded as congenital anomalies of the arachnoid mater, and originate from a splitting/tearing or duplication of this membrane.4 Cyst expansion may occur through the following: (1) a slit-valve mechanism7-9; (2) fluid production by the cells lining the walls of the cyst10; (3) an increase in osmotic pressure in the cyst cavity as compared with the subarachnoid space (eg, following bleeding)11; or (4) liquid movements secondary to pulsatile movement of cerebrospinal fluid (CSF).8 The clinical manifestations of these cysts depend on their size, anatomic location, and impact on CSF flow dynamics. The best chance of success in the treatment of symptomatic cysts is likely offered by the establishment of a single CSF space by means of a surgical communication between the cyst and the ventricular system or basal cisterns.4,12

This article draws attention to an unusual phenomenon of an initially unsuspected, slowly progressive homonymous hemianopia as the sole clinical manifestation of a symptomatic suprasellar arachnoid cyst in an elderly patient. Endoscopic cyst fenestration led to a resolution of the patient’s visual field deficit within a few months. 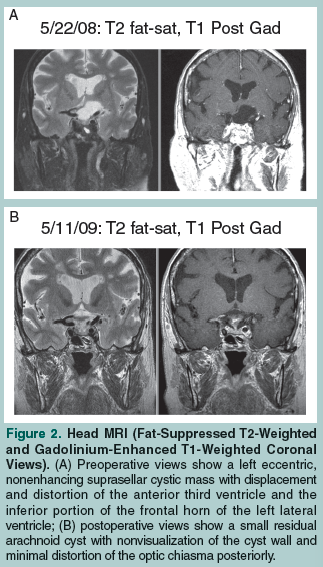 A 75-year-old woman presented with an over 16-month history of perceived right eye vision impairment, which she described as “blurriness” and a “distortion of shapes” in the right temporal margin. She reported having difficulty skimming lines of text from left to right while reading, and she noticed that she did not see the end letters of longer words. The patient’s vision did not improve after she was prescribed corrective lenses, and worsened after a cataract extraction was performed in her right eye. A subsequent visual field test detected an incongruous right homonymous hemianopia (Figure 1A). Her corrected visual acuity was 20/40 in the right eye and 20/25 in the left eye. An ophthalmoscopy showed no evidence of papilledema or optic atrophy. A head magnetic resonance imaging (MRI) scan showed a slightly eccentric, left paramedian, fluid-intensity, nonenhancing cystic mass (3.3 cm in diameter in the coronal plane) in the suprasellar cistern with displacement and distortion of the anterior third ventricle and the inferior portion of the frontal horn of the left lateral ventricle without associated hydrocephalus (Figure 2A). The pituitary stalk was displaced to the right and the optic chiasma/tract was displaced upward to the right. A pituitary hormone profile showed no endocrinological disturbance. Clear fluid was drained from the cyst by right frontal approach endoscopic transventricular fenestration. Sequential visual field tests showed a complete resolution of vision defect approximately 4 months after surgery (Figure 1B). Postoperative follow-up MRI scans of the head showed progressive shrinkage of the cyst cavity, as well as nonvisualization of the cyst wall and minimal distortion of the optic chiasma posteriorly (Figure 2B).

The homonymous nature of the progressive vision deficit was initially not appreciated in this patient because she reported perceived vision impairment in the right eye. Corrective lenses did not improve right eye visual acuity, so her symptoms were ascribed to a right eye cataract, a common cause of vision impairment in the elderly. A complete eye examination showed no ocular pathology, so the lens was extracted. When the patient’s vision worsened after surgery, a visual field test detected a right homonymous hemianopia. Therefore, it seems appropriate to perform visual field tests in elderly patients who may provide a less than accurate medical history and report of symptoms or who do not recover their vision as predicted after eye surgery. 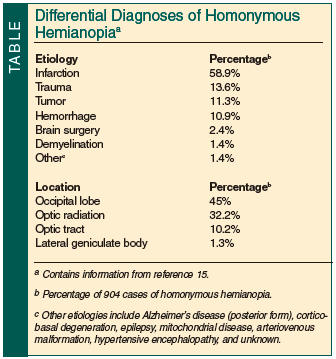 A progressive homonymous hemianopia has not been reported as the sole presenting manifestation of a suprasellar arachnoid cyst in an elderly patient. Symptomatic primary intracranial arachnoid cysts are rarely seen in the elderly (>65 years).13,14 Symptoms of arachnoid cysts reported in the elderly usually resemble symptoms of normal pressure hydrocephalus or chronic subdural hematoma, such as dementia, hemiparesis, urinary incontinence, and gait disturbance13; other reported symptoms include seizures, headache, vision disturbance, ataxia, personality change, and facial pain. Because suprasellar cysts are clinically not considered in the etiology of a homonymous field defect, this article aims to draw attention to this unusual phenomenon in a list of differential diagnoses (Table15).

Vision disturbance is a relatively infrequent complication of intracranial cysts, and, as previously stated, the initial clinical features of suprasellar arachnoid cysts typically include bitemporal hemianopic field defects and pituitary gland dysfunction.6 A case series published in 2007 reported altered vision in 1 of 15 younger patients (age range, 2 weeks-39 years),3 and another case series published in 1991 reported it in 3 of 39 elderly patients (>60 years).13 In a case series of 20 children with suprasellar cysts, optic pallor was reported in 6 patients, of whom5 patients experienced impaired visual acuity with or without visual field defect.20 Vision impairment was due to the effects of increased intracranial pressure from hydrocephalus or from the direct optochiasmatic pressure effects of the cysts on anterior visual pathways. In most reports, the outcome of patients’ vision after cyst fenestration was incompletely documented.3,6,20 The homonymous hemianopia found in the case patient was exceptional6; a variation in the anatomical relation between the dorsum sellae and the chiasma likely results in a variety of visual deficits.21 In isolated reports, parasellar and retrosellar arachnoid cysts caused incongruous homonymous hemianopia in younger patients (age 33 and 16 years, respectively).6,22 Visual acuity and visual field defect improved in both patients after cyst fenestration. In the 16-year-old patient, impaired eyesight developed acutely over 5 days, and fenestration resulted in the rapid (over 2 weeks) resolution of visual deficits22; these authors recommended early fenestration to prevent permanent vision pathway damage. The case patient discussed in our article, however, completely recovered eyesight despite a 16-month history of progressive vision decline. We propose that chronic symptoms should not preclude patients from decompression surgery, and drainage should be offered to patients with symptomatic arachnoid cysts independent of duration of symptoms. The probability of vision recovery in compression-related optic neuropathy usually correlates with the severity and duration of optic pathway compromise.23,24 Recovery of vision is less likely in patients with preoperative atrophy of retinal nerve fibers.25,26

A notable phenomenon in the case patient was the slow recovery of her vision over a period of a few months after having suffered a 16-month history of progressive visual field impairment. Neurosurgery has been the mainstay of treatment for compressive optic neuropathy due to anterior visual pathway mass lesions. Based on a schema that explained the slow recovery of vision in animal models of compressive neuropathy,27,28 we presume that recovery of vision in the case patient occurred by a combination of (1) early, postoperative return of axoplasmic flow within the optic tract, followed by (2) remyelination of the axons of the anterior visual pathways, which, in turn, stimulated (3) a slow restoration of synaptic transmission to suprathreshold levels at the lateral geniculate nucleus.29,30

This article draws attention to the unusual phenomenon of a symptomatic suprasellar arachnoid cyst presenting as an initially unsuspected, slowly progressive homonymous hemianopia in an elderly patient. Despite a long-standing visual field deficit, eyesight was recovered in the case patient over a period of months after cyst fenestration. This article emphasizes the potential recovery of chronic neurological deficits and vision improvement by means of cyst drainage independent of the duration of symptoms.

7. Lena G, Erdincler P, Calenberg F, Genitori L, Choux M. Arachnoid cysts of the middle cranial fossa in children. A review of 75 cases, 47 of which have been operated in a comparative study between membranectomy with opening of the cisterns and cystoperitoneal shunt. Neurochirurgie. 1996;42(1):29-34.

29. Stark KL, Kaufman B, Lee BC, Primack J, Tychsen L. Visual recovery after a year of craniophayngioma-related amaurosis: report of a nine-year-old child and a review of the pathophysioloic mechanisms. J AAPOS. 1999;3(6):366-371.